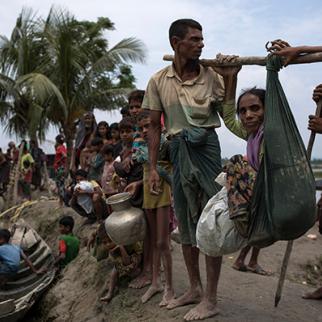 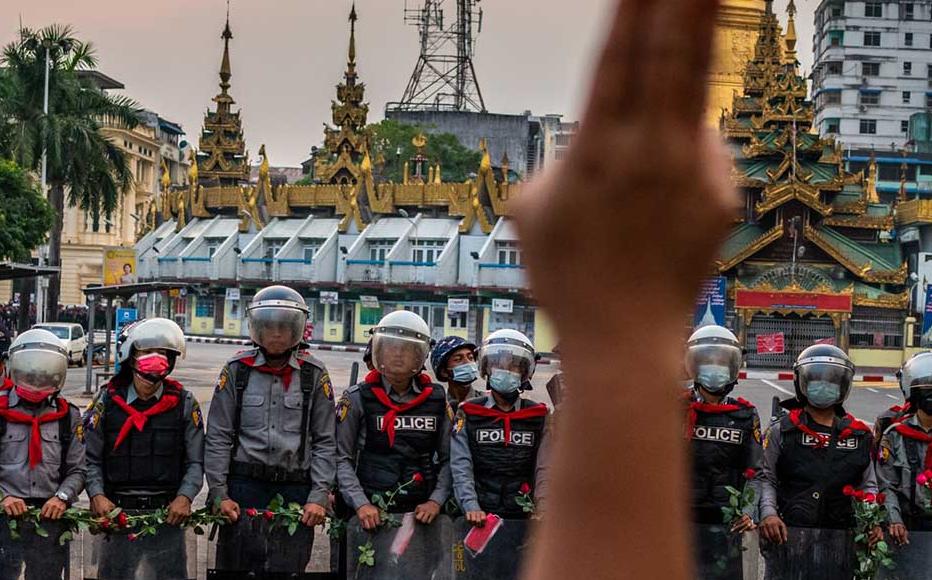 A protester makes a three-finger salute in front of a row of riot police, who are holding roses given to them by protesters, on February 06, 2021 in Yangon, Myanmar. © Getty Images
The link has been copied

As the country increasingly teeters toward civil war, the Independent Investigative Mechanism for Myanmar (IIMM) has formally reached out to ask IWPR to secure potential evidence relating to abuses, including potential crimes against humanity and genocide, committed by the country’s military.

The IIMM was established in 2018 by the UN’s Human Right’s Council after its own investigation – the Independent International Fact-Finding Mission - reported that the country’s military leaders had committed “massive violations” of international law.

IIMM’s remit spans 2012 right up to the February coup this year in which Myanmar’s army – the Tatmadaw - returned to absolute power after almost ten years of civilian-led rule. Thousands of protestors, officials, journalists and activists have been jailed alongside the country’s figurehead Aung San Suu Kyi. An unknown number of opponents have been tortured, killed or disappeared. Others have gone to ground or somehow managed to flee the country.

Armed resistance is steadily rising across the country, with reports that former civil society activists are receiving training from longstanding armed ethnic groups based in the jungle.   Official checkpoints in Yangon are being targeted daily and police and soldiers assassinated, fueling fears that Myanmar is now spiraling into a full-blown civil war.

Although IIMM’s outreach to IWPR is not fully linked to current events in Myanmar, the body has expressed concerns that the chance of collecting critical evidence reduces with every passing day.  While the IIMM is not a court and has no prosecutorial powers, it is believed that if sufficient and pressing evidence and testimony is forthcoming, a future internationally sanctioned and supported justice process will follow as a result.

IIMM’s leadership and staff had a first formal meeting with IWPR’s Asia Director Alan Davis in late October. Davis designed and led IWPR’s anti hate speech project in Myanmar having first visited the country undercover as a journalist for the Observer in 1991.

IWPR was asked to contribute to the investigation as a consequence of the two-year anti-hate speech project it ran inside Myanmar, which involved a team of 20 local journalists trained to monitor, analyse and publicly report on instances of hate speech.

Launched in 2015, the project found that while traditional media and journalists in Myanmar had become more professional and responsible, hate speech in the country had exploded. This was largely due to the end of censorship and the simultaneous arrival in Myanmar of a nine US dollar smartphone, preloaded with a Facebook Basic app that allowed free expression to run riot in a country with a pitiful educational system and no history or understanding of civil society.

As IWPR subsequently reported to international outlets including the UK Guardian and the BBC’s Newsnight - as well as to the UN Fact-Finding Mission itself - the vast majority of all the hate speech found and analysed was on social media.

In a country comprised of 67 different ethnic groups that been living under military rule with total censorship and in isolation from the outside world for almost 50 years, IWPR stressed that hate speech should have been expected and planned for.

From the very outset of its project in 2015, IWPR publicly warned that Myanmar needed to understand and learn the lessons of how hate speech drove conflict and genocide in the former Yugoslavia.

As IWPR reported at the time – using Yugoslavia as an example – hate speech not only hurts its targets, but ultimately those who use it. The Myanmar project’s first report in 2015 made clear that, left unchallenged, hate speech tears societies apart.

IWPR’s project in Myanmar analysed thousands of problematic postings on Facebook and publicly analysed and critiqued more than 400 uploads. It noted a steady rise in hate speech that was common to many ethnicities but moved from being general and unstructured to more coordinated and weaponised against Muslims in general, and the Rohingya in particular.

Instances of hate speech we found included townships declaring themselves to be Muslim free, accusations that Yangon mosques were being used to house weaponry and that the Islamic State (IS) was planning to blow up Shwegadon Pagoda, the country’s most sacred Buddhist shrine.

Just after the project closed, the Tatmadaw launched its campaign of ethnic cleaning against the Muslim Rohingya in August 2017. Almost a year later, Facebook finally took down many of the worst instances of hate speech IWPR had found and reported on.

“IWPR is more than happy to help the IIMM and its work in whatever way we can, especially given our monitors never used their own personal computers or email addresses to protect their own safety and security,” said IWPR’s Davis. “The raw data lies outside of Myanmar, and we have a responsibility to go through it, because as an organisation that looks to help build peace and support justice, nothing is more important than bearing witness and holding people to account.”