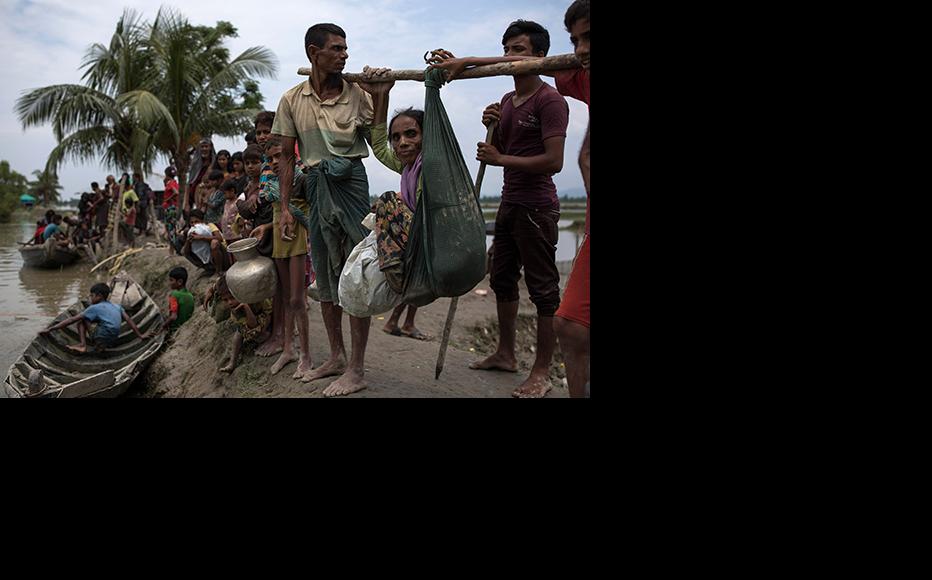 Thousands of Rohingya continue to cross the border into Bangladesh after violence erupted in Myanmar's Rakhine state. (Photo: Dan Kitwood/Getty Images)
The link has been copied

While religious nationalists in Myanmar have proved highly adept at understanding and exploiting the power of social media, they seem oblivious to Newton’s Third Law of Motion. The principle that for every action there is a reaction may not be well known to a group that ranks astrology above science or logic.

On my first visit to what was then Burma in 1991, the local currency was only printed in 18, 45 and 90 kyat notes on the basis that the government judged any multiple of nine to be “lucky”.

The universities were closed, students were jailed and the country’s entire education system was in a pitiful state – as was pretty much everything else. On the road from the airport into what was then Rangoon, huge red billboards in both Burmese and English warned visitors to “Love the Motherland” and threatened “Anyone who is Unruly is the Enemy.”

The country was very much a backwater forced into isolation by its own military leaders. Daw Aung San Suu Kyi was widely unknown outside of Burma, despite having just won the Nobel Peace Prize. The road to her house on University Avenue was blocked off and soldiers would hiss warningly at anybody foolish enough to approach them.

Those big red billboards have long gone and hundreds of others have gone up in their place warmly welcoming today's tourists with adverts for luxury cars and international consumer brands.

What visitors on the road into town will not see, however, are the many smaller noticeboards that have sprung up with increasingly frequency across the country. These are written in Burmese only, often use the colourful Buddhist flag as a background – and declare that particular village or township to be “Muslim Free.”

As part of IWPR’s two-year anti-hate speech project in Myanmar that ran until this July, we documented and reported the increasing incidence of these signs. Many of them further clarified that “Muslim Free” meant that Muslims were not allowed to stay the night, nor own any property there. Some went up at riverboat stations, denying Muslims access.

We asked the authorities if they knew who had put these signs up, and why they weren’t being removed. We never got a satisfactory answer.

IWPR also found photos of these signs on Facebook, being shared and applauded by users who urged their own communities to take note and follow suit. Incendiary comments and ethnic slurs were typical. Muslims were described as dogs and vermin who had no place in the country and were threatening the state’s very existence.

We called this out for what it was – a move toward apartheid. But reports of these signs never made it into the local media. Rising Islamophobia made it physically dangerous for any local journalist to report on or visit such sites – and their story might not have been published anyway.

Without doubt, Myanmar’s journalism has become much better since 2012, when poor quality and inflammatory reporting worsened inter-communal riots that broke out in Rakhine state. The international media training community stepped in and the professionalism of local journalism notably improved.

But while traditional media is no longer part of the problem, it has yet to become part of the solution. With one or two notable exceptions, it simply sidesteps the issue of race-relations –especially where Muslims are concerned.

To be fair, local journalism simply reflects political trends in Myanmar over the past few years. There has not only been a political vacuum in terms of moral leadership, but also a move to marginalise the Muslim community in general and the Rohingya in particular.

The race and religion laws brought in to restrict the right of Muslims to marry or have children with Buddhists and Suu Kyi’s stubborn ambiguity on the Rohingya have led many to believe the coalition government led by her National League for Democratcy (NLD) is increasingly in thrall to an ultra-nationalist agenda.

My own disillusionment came in 2014 on the day of the Yangon launch of the Suu Kyi Foundation, when the actress Michelle Yeo, who played her in the 2011 hagiographic film The Lady, joined her on stage. A Bangladeshi journalist tried to ask the final question at the press conference but was very rudely, sharply – and loudly – dismissed by the Nobel laureate, who then turned, beaming, to the CNN representative.

The lady as portrayed in the film would have done no such thing.

This deepening sense of unease about Suu Kyi’s moral compass was worsened by her delayed response to the assassination of the NLD’s top lawyer and constitutional adviser Ko Ni on January 29 this year. He also happened to be a Muslim, and was saddened that the NLD were unable to field a single Muslim candidate for the 2015 General Elections.

It was almost a week before Suu Kyi got in touch with his widow or spoke out about the killing.

Over the course of IWPR’s two-year Myanmar project, our team comprised more than a dozen local monitors and editors whose job it was to scan, assess, qualify and report on hate speech.

All our team, save one, were Buddhists and from the majority Bamar ethnic group. And only one of my colleagues felt safe about putting her name to the project. Our office’s location was kept hidden, given the online threats posted against us. Despite this, all of our staff wanted a way to engage public meetings and discussions up and down the country about the dangers of hate speech and what a failure to speak up would do to society. Sadly, we had their safety to think of and a responsibility to protect and do no harm.  Our donors also were most probably correct in urging us to err on the side of caution. Even so, it was a quandary that still hurts.

We found very little hate speech in the printed media – the only exception being newspapers published by the Buddhist MaBaTha Movement which has since been banned, although it has reinvented and renamed itself. The vast majority of hate speech was on social media, particularly Facebook.  And to be clear, the situation was never simple: IWPR's monitoring found a great deal of ultra-nationalist vitriol aimed at the NLD and at Suu Kyi herself: she was even called a “kalar-Indian lover” simply for the time she wore her shawl over her shoulder.

But while not all hate speech was anti-Muslim or anti-Rohingya, the overwhelming majority certainly was. Much was juvenile and just plain nasty, while a good deal was insidious and seemed to be increasingly organised. A lot of it was also smart and it was clear a great deal of time and energy had gone into some of the postings.

Over time, we saw the hate speech becoming more targeted and militaristic. Wild allegations spread, including claims of Islamic State (IS) flags flying over mosques in Yangon where munitions were being stored, of thwarted plots to blow up the 2,500 year-old Shwedagon Pagoda in Yangon and supposed cases of Islamic agents smuggling themselves across the border.

At the same time we noted, in comment pieces and project reports, that we felt a clear sense that in the absence of any kind of political leadership that a darkening and deepening vacuum that would ultimately result in a violent reckoning.

After every IS or IS-inspired terrorist attack in Paris, London and elsewhere, the hate speech in Myanmar increased. Bombings overseas served to amplify simple disputes and arguments between people of different faiths.  Just a few months ago, we reported how a mob of nationalists stormed through an enclave in Yangon where it was reported several illegal “Bengalis” – code for Rohingya – were hiding.

Most importantly, we warned that rumours and lies peddled and left unchecked might end up creating their own reality. We feared that the fake news of plots and insurgencies would end up coming true.

And that is what is now happening. A group of insurgents calling itself the Arakan Rohingya Salvation Front (ARSF) has attacked government positions, eliciting a brutal army response. Now finally it is not just philanthropist George Soros and the Human Rights Clinic at Yale Law School who are claiming a genocide is taking place. Today, senior representatives at the UN are alleging ethnic cleansing, too.

In the past few days, from Turkey to Afghanistan and Indonesia, Saudi Arabia to Malaysia and beyond, we are seeing demonstrations for jihad in support of the Rohingya. And social media is now finally mobilising against the Buddhist nationalists.  Newton’s Third Law is in full swing.

There are far fewer Buddhist nationalists in Myanmar than there are connected, energised and angry Muslims around the world. And Myanmar is increasingly facing mounting anger inside the Association of Southeast Asian Nations (ASEAN) where countries long practised a policy of non- interference in each others’ affairs.

This is now changing – and Myanmar faces being weakened both internationally and domestically. The ultra-nationalist Buddhists did not see this coming, or perhaps they did and this is somehow part of an even bigger and outlandish plan and an attempt to cleanse the Union and ‘save’ the Bamar race. In the end, everybody loses, just as they always do in instances of hate speech.

Lest we forget, the country is made up of around 135 different nationalities – 136 if you count the Rohingya, which many do not – living in often uneasy co-existence. It is not quite Yugoslavia, but it might end up being so unless much wiser heads prevail.   Now more than ever, Myanmar and the international community needs a political leadership and moral vision to prevent the situation deteriorating rapidly.

Suu Kyi spent many decades amassing her moral capital. She had better start spending it fast, or else risk going down in history as the leader who oversaw a break-up of her father’s beloved Union. International support and goodwill has largely helped keep the country together in the absence of an all-powerful and merciless military junta – and being neither one thing nor the other, the fragile country might easily start coming apart. Without either power or morality, Myanmar will be lost.

Alan Davis is Asia & Eurasia Director for the Institute for War & Peace Reporting. Previously he was an award-winning journalist covering Asia and the former Yugoslavia.
Myanmar
Conflict, Refugees
Connect with us