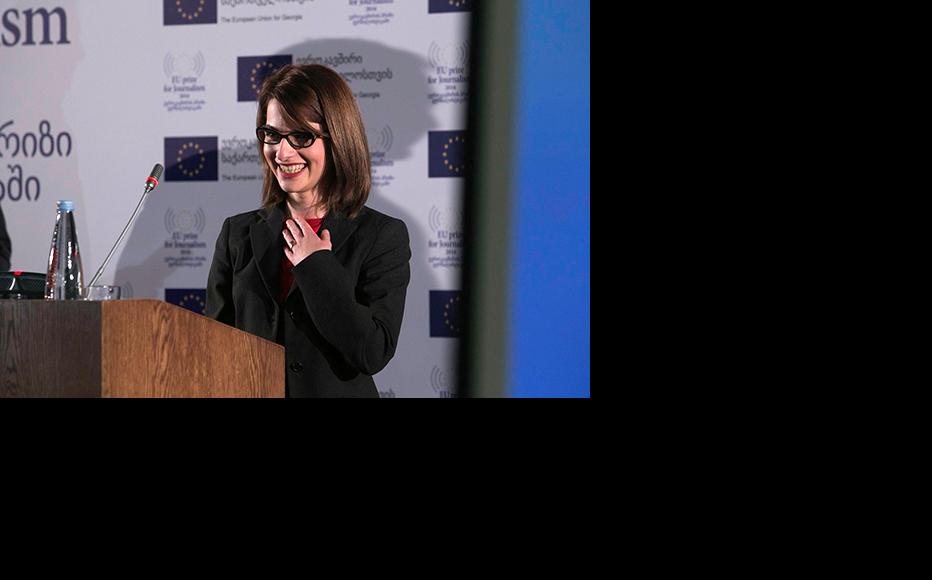 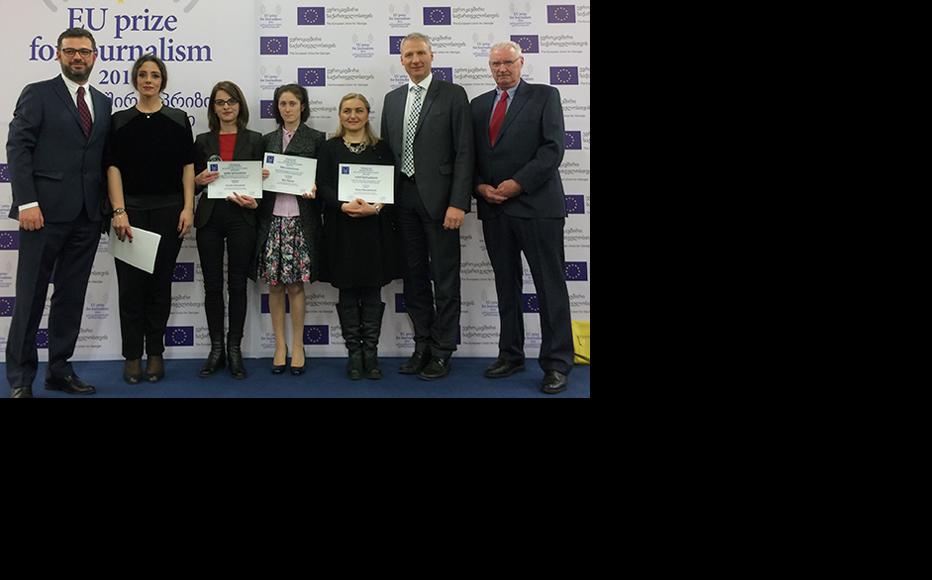 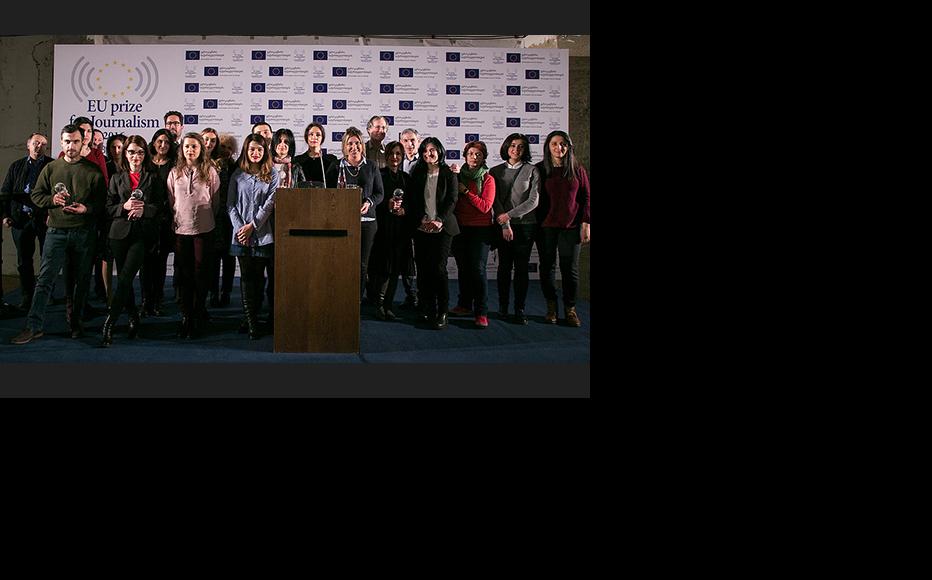 Winners and finalists of all categories of the 2016 EU Prize for Journalism, including jury members. (Photo: Delegation of the European Union to Georgia)
The link has been copied

Georgian journalist Gvantsa Doluashvili is to spend a month-long fellowship at IWPR’s London office after winning the 2016 EU Prize for Journalism.

Her submission, Non-Stop Communication, followed families split by the chain-and-wire fencing that now demarcates the de-facto boundary between Georgia and the breakaway region of South Ossetia.

Doluashvili comes from Gori, a town in the Shida Kartli region adjacent to South Ossetia, and said that she drew on her own experience in her writing.

“I can write best about the things which are painful for me,” Doluashvili said. “I think the prize is a result of that. Every day I meet people who give me the strength to believe that both sides want peace and that artificial barriers are unable to destroy the bonds between relatives and neighbours. These people know the price of their friendship and they find any way to keep this relationship. Sometimes the mobile phone network is the best way to do it.”

Sofo Bukia, the editor of the online edition of Jam News - where Non-Stop Communication first appeared - told IWPR that the honour was a great boost for the fledgling outlet, which had only been up and running for a year.

“The prize is a huge motivation for a young media outlet,” she said, adding, “Considering the conditions of the Caucasus region, we have a special focus on conflicts. Jam News is a platform for dialogue between societies divided by conflict. It is a space for discussion to break stereotypes and overcome discord.”

Launched in 2012, the EUMM Special Prize for Peace Journalism aims to support peaceful dialogue between the communities divided by conflict and to encourage professional and ethical reporting.

“It is symbolic that EU Prize for Journalism is awarding the authors of the best pieces at the building of former popular soviet newspaper Communist,” EU Ambassador Janos Herman told guests at the February 14 award ceremony.

“A lot has changed since then. The world around us is constantly changing, but the role of a journalist remains the same. Freedom and quality are the best words to describe media. Today is the day when the European Union is showing its respect for professional journalism.”

As in previous years, the Special Prize for Peace Journalism had plenty of contenders.

“Among the submissions there were many interesting stories,” said Kestutis Jankauskas, head of the European Union Monitoring Mission. “They told us about the connections of people divided by conflict, the connections which even barbed wires were unable to split. These stories helped EUMM to better understand the real situation in the conflict zone. We have always supported the development of free media in Georgia and will do so in future.”

“There were many powerful pieces,” agreed jury member Sofo Mgelade, a producer for Associated Press. “It was hard to select the winners. It proves that we have many professional journalists in our media. I hope that independent, strong and impartial media will never face any threats in this country.”

For the first time this year, other finalists received honourable mentions.

Tamara Mearakishvili, whose blog How they Erased the Traces of War was published by the Netgazeti platform, and Nino Toloraia, whose  article We are Patient to Wait appeared on Livepress, were awarded special certificates.

Livepress is a specialist online outlet that has been reporting on issues related to conflict in Abkhazia since the day it was established.

“Our goal is to provide people living on both sides of the Enguri river with objective information,” said Geronti Kalichava, one of its founders. “It is very encouraging for Livepress to be a finalist in the competition. This prize will foster the values which are necessary for journalists working for our publication and for other media outlets as well.”

“I am happy that my work has brought some positive results and that I could somehow contribute to the restoration of communication riven by conflict,” Mearakishvili said.

“I am not a professional journalist. However, I see that there is a huge difference between my previous and current work. Other people also notice that and say that I have grown, and it all became possible thanks to IWPR and its trainings. Standing here today next to professional journalists is a great honour and responsibility for me at the same time,” she added.

Besides the Special Prize the annual prize was awarded to journalists in six other categories.

The winners of the 2016 EU Prize for Journalism are:

Giorgi Mgeladze, chairman of the Georgian Charter of Journalistic Ethics, said that the EU Prize for Journalism was essential to support the country’s media.

“Today, the media has a great responsibility since it is very hard to find the truth in this massive flow in information,” he continued. “The more product we have, the lower is the level of trust. Besides, we have so many things to learn, that is why projects like this are extremely important for the advancement of Georgian media.”

The prize is a joint initiative by EUMM and IWPR, and part of the EU Prize for Journalism project. It is implemented through the financial support of the European Union.

Georgia
Journalism
Connect with us