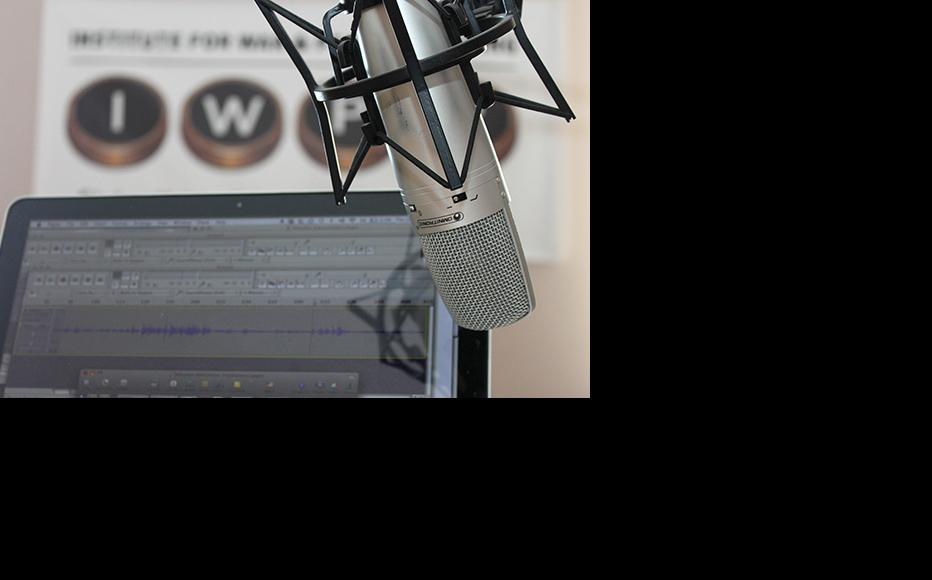 Header for the IWPR Radio Podcasts “Refugee News” and “Behind the Headlines” run by young reporters from conflict-affected regions of Georgia and students of media schools in Tbilisi. (Photo: IWPR Georgia) 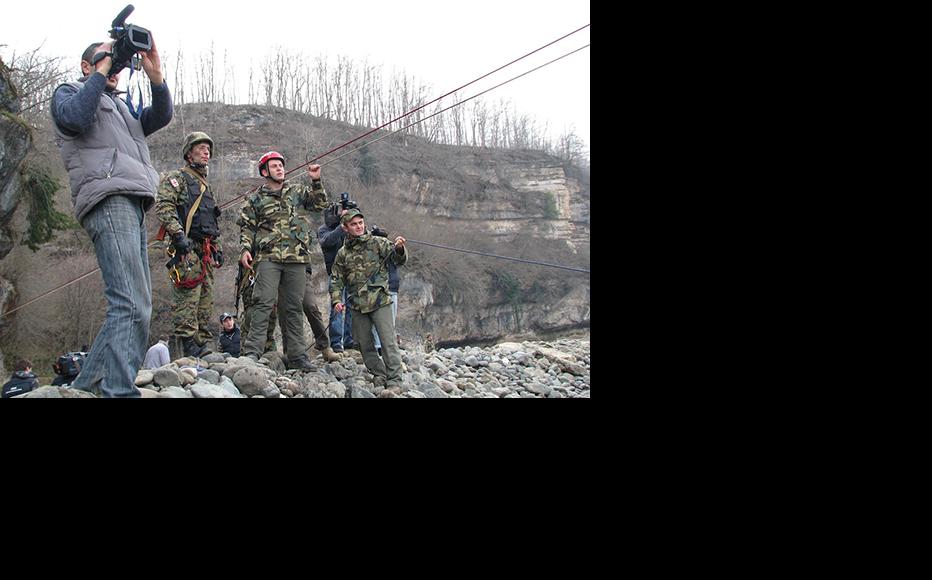 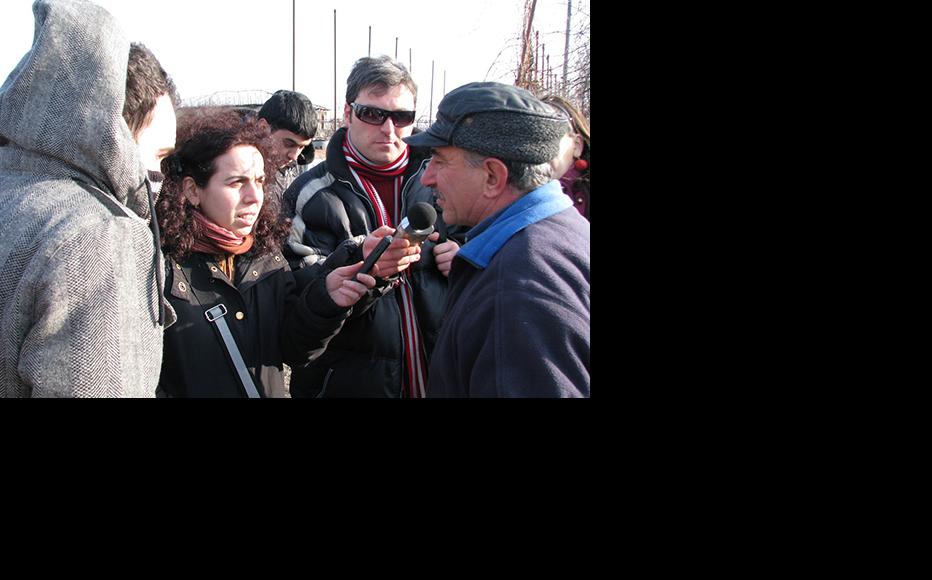 Regional journalists from Georgia on a task during the training in villages near South Ossetian conflict zone as a result of which they mastered the skills of audio production. (Photo: IWPR Georgia) 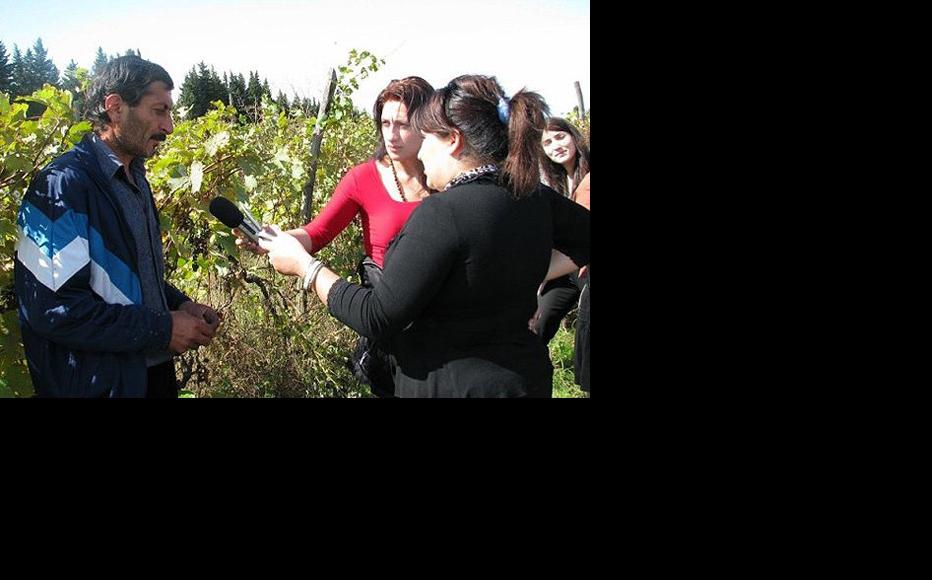 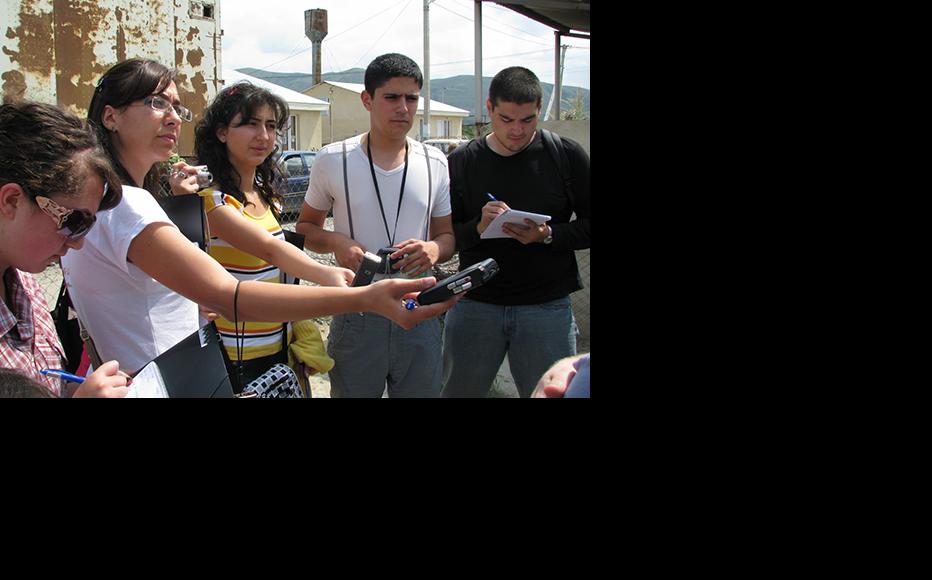 As part of IWPR-orgniased reporting mission Armenian and Azerbaijani journalists visiting Berbuki IDP settlement in Georgia built as a result of Russian-Georgia war in August 2008. (Photo: IWPR Georgia)
The link has been copied

A decade after IWPR launched a two-year regional radio project in Georgia, its impact still resonates amongst a now-widespread and well-established network of local broadcasters.

These regional stations play a key role in addressing local issues and reaching community audiences through subject-based reporting that mainstream public and commercial media often overlook. IWPR’s training and equipment, as well as online and streaming hosting services, have helped transform the local media scene in this multi-ethnic and conflict-affected context.

Back in 2007, IWPR’s Georgian Regional Media Network project initially focused on forging links between media and civil society across the provinces of Georgia, including its two inaccessible breakaway republics, and building the capacity of journalists working in regional radio.

But then came the August 2008 war, which highlighted just how vulnerable Georgian telecommunications infrastructure was. Radio channels relied on analogue broadcasting FM towers, which were disabled during Russian bombing.

IWPR had to respond rapidly to support radio media during and after the conflict, deploying a secure server to host regional media websites and run internet streaming for radio channels. The server was intended to help local media develop alternative broadcast channels and also serve as a secure hosting service for a number of websites. It was used as a repository for some 200 audio programmes on conflict-affected communities and displaced people, programmes later rebroadcast in analogue and digital formats by IWPR partner stations.

The two-year project involved 120 journalists from Georgia’s all provinces, including minority communities and conflicted-affected regions. Some went on to establish their own media outlets, while others lead editorial offices or themselves now train local journalists and civil society organisations.

Even though the project formally came to an end in 2009, IWPR has continued to support the radio stations by providing free hosting and internet streaming. Although local broadcasters find it hard to compete with the national networks, especially amid a shrinking market for advertising, IWPR provision ensures they can still maintain global access and high quality stereo sound.

NOR is an Armenian-Georgian language radio station based in the town of Ninotsminda in Samtskhe-Javakheti region. It reaches nearly a third of the district’s 24,000-strong population, despite facing challenges in improving the quality of its broadcasting signal and producing higher quality programming, as well as attracting sufficient advertising revenue.

The channel’s director Ararat Ttyan said that initially their signal had not covered the entire region, a problem resolved with the help of IWPR’s internet streaming.

“As soon as the streaming of our channel went online, the audience started to grow and we had offers to place advertisements from abroad,” he said. “In those remote places where FM broadcast was unavailable, people switched to mobile phones and through online streaming our radio content has become accessible.”

Radio Dzveli Kalaki covers Georgia’s largest region of Imereti and neighboring Guria in the west of the country, with a potential audience of 700,000.

“The lack of sources of income and a poor ad market hampers the development of the company and its technical upgrade, which makes it difficult to produce diverse, quality media content,” said Dzveli Kalaki director Irakli Machitadze.

In that context, he continued, “IWPR’s assistance in providing internet streaming for our radio channel is very helpful”.

One of the first broadcasters to register with IWPR’s internet streaming server was Radio Hereti, which began transmitting from the eastern Georgian region of Kakheti. Initially based in the town of Lagodekhi, the station expanded rapidly and launched two additional channels covering the capital.

These now have the potential to reach three million listeners through FM broadcast. Its Facebook page has 250,000 followers and internet streaming is reaching other users online.

Media experts say that local networks should not view themselves as in competition with larger broadcasters. Instead, they have a unique ability to provide a much-needed communication platform to historically underrepresented religious and ethnic groups. These stations open up the issues of communities that were once closed and segregated to a regional and national level.

“It is hard to compete with the national broadcasters and the aim should not be that,” said Konstantin Stalinsky, a digital media development specialist. “Community radio broadcasts from within communities, its content reflects of local interests and most importantly those who need a voice and participation - primarily underrepresented religious and ethnic minorities.”

The key, he continued, was to ensure internet connectivity in more remote areas, where young people in particular were already accessing content online rather than via an FM signal.

“A large measure of credit is due to IWPR, which provided help to radio NOR and Southern Gates,” he concluded.

The ongoing impact is typified by stations like Southern Gates, part of the multimedia radio holding in the region of Samtskhe-Javakheti, which has diverse ethnic and religious communities.

It began broadcasting 18 months ago and although it so far only covers the regional capital Akhaltsikhe only, its programmes are rebroadcast in the predominantly ethnic Armenian town of Ninotsimnda, thanks to cooperation with radio NOR.

“We started broadcasting recently and so far we are fully dependent on donor funding,” said Southern Gates director Lela Inasaridze. “We are looking for alternatives, for additional sources of funding through advertisements, but so far to no avail, as the ad market has been in a slump lately.”

“We are producing specific content which is relative to local communities, including content in Armenian language. We know our audience. There are not exact numbers, but if we look at consumption via social media and the number of listeners through internet streaming our audience is growing steadily.”