In Russian-occupied areas, the modus operandi has become random torture and the execution of civilians, seemingly on a whim.

In Russian-occupied areas, the modus operandi has become random torture and the execution of civilians, seemingly on a whim. 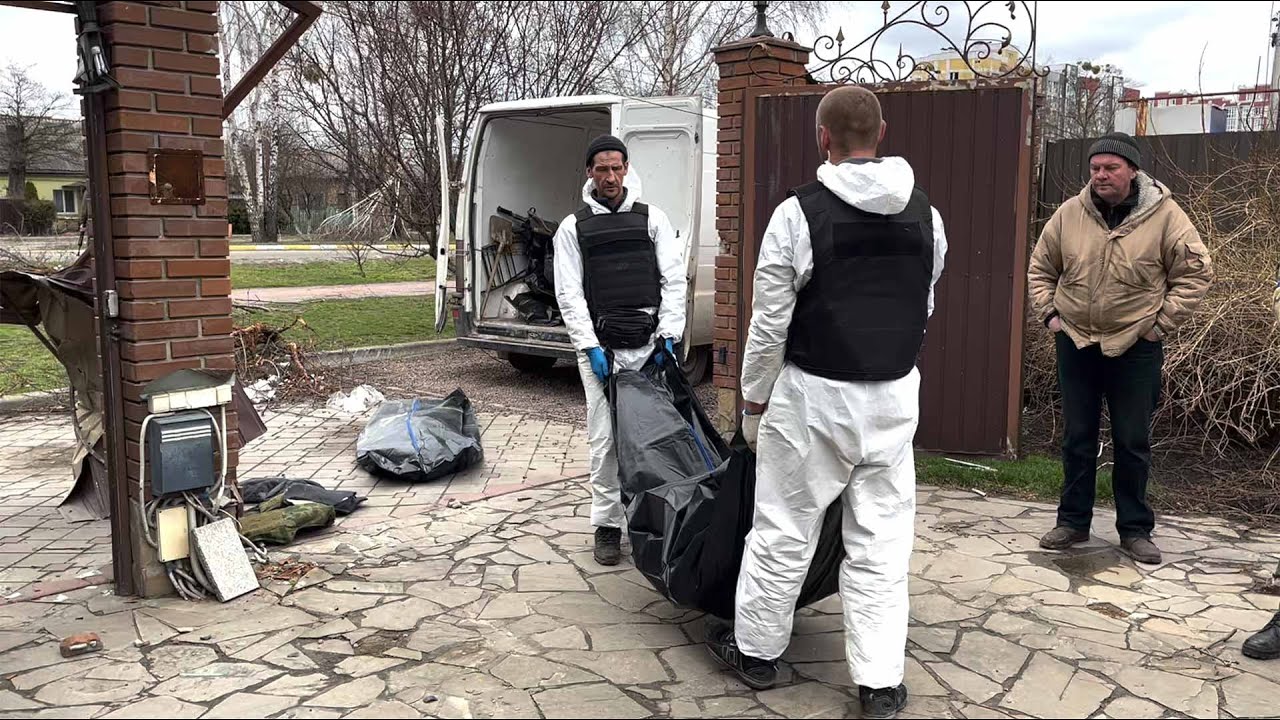 Anthony Borden reporting from Hostomel, Ukraine, 6 April 2022.
The link has been copied

On a broad central street, in front of a gated suburban home with a luxury Lexus sedan and well-tended garden, two bodies and the family dog lay rotting.

A neighbour had informed the police in the recently liberated Kyiv suburb of Hostomel, and the local recon unit arrived to clear the bodies.

Both male, one lay on his back, mud on his face and blood on his forehead, a bullet wound in the back of his head.

Possibly in his late 30s, his arms were pulled behind his back, with steel wire visible from the side, tying his hands together.

“This is an average family, like any family in the neighbourhood, just another war crime.”

On his body lay a crumpled pack of cigarettes and a lighter. The executioners had apparently marked the completion of their task with a smoke.

The second, obscured by the lower limbs of a cedar tree, was face down, his hands tied with a long length of external telephone wire, his blue jeans pulled down, leaving him exposed.

A black terrier lay nearby. Only its corpse had been covered, with a pink sports top.

As at so many Ukrainian homes in Russian held regions, the two-storey dwelling had been ransacked, the front door off its hinges, windows shattered, the contents thoroughly looted and wrecked. Same with the Lexus.

“This is an average family, like any family in the neighbourhood, just another war crime,” said Artem, 35, a businessman who had joined the police force at the start of the war. “These bodies, it seems, have been lying here for some weeks.” 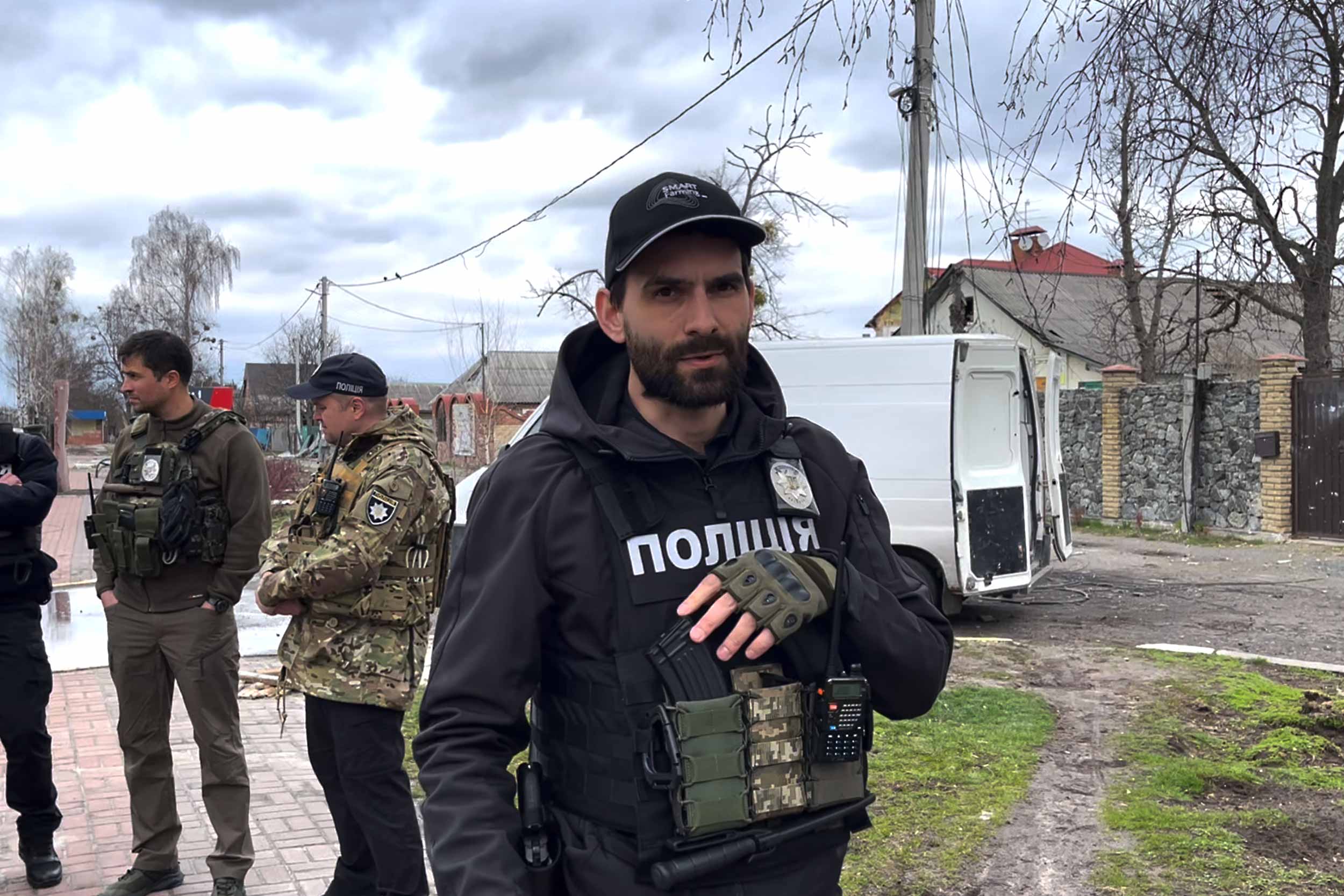 Two sappers, in white suits, blue gloves and black flak jackets, laid out the body bags. The dead men were bagged, zipped up and carried to a white Transit van, where they were piled with ten other bodies found so far that day.

There were no official photographs or video recording of the scene. Notes taken, if any, were likely cursory. If this was a war crime, the evidence at the scene was gone.

Ruslan, the head of this army detail, said that his group had so far found more than 40 bodies of Ukrainian civilians.

“All of them tied, shot in the head, a lot of rape, we think even some corpses were raped,” he said. “If you are shooting someone, why do you tie them first, and why do you torture them? They are torturing them just because they are Ukrainians.” 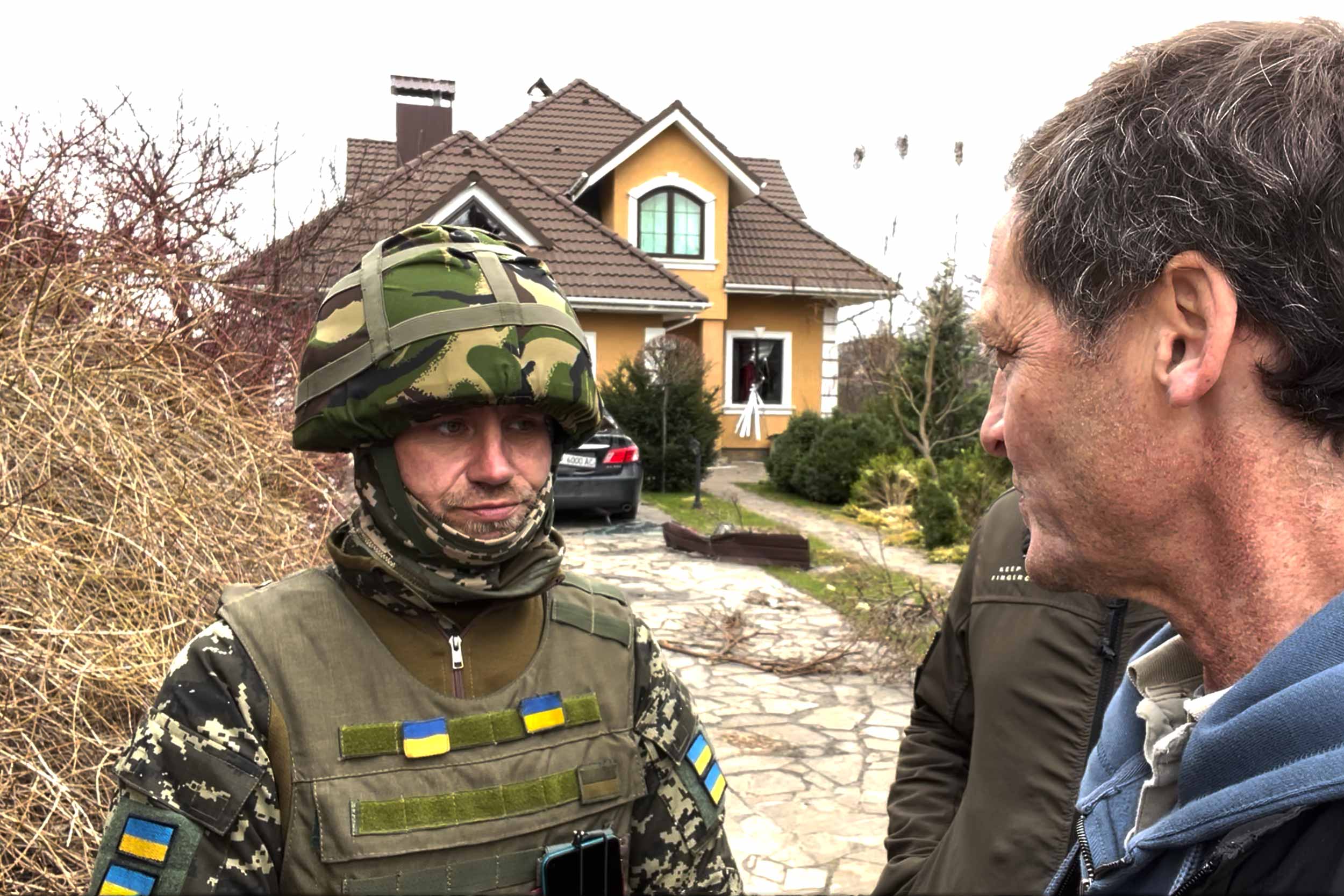 Hostomel may have been the most important town in the fight for Ukraine. In the first hours and days of the war, Russia’s blitzkrieg strategy focused on taking the town and its airport, a half hour or so to Kyiv.

With a secure air bridge, Russian forces would have piled in at speed, to overwhelm the capital and overthrow the government.

Instead, Ukrainian forces rallied, and held off the Russians long enough to make the facility and aircraft there unusable and reinforce the capital, before ceding the strip and the town.

“These people killed here, it is not a one-off, until this occupation is over, someone else is being is killed and raped right now wherever Russians are in control.”

Bodies may not have been as apparent or numerous here as at nearby Bucha, where more than 320 corpses have been found littered across streets and yards.

Nor was there evidence of mass slaughter, as at Borodyanka, with its shelled tower blocks, leaving several dozen – according to estimates of local citizens – buried for weeks under the rubble. It will be some time still before these sites can be excavated.

Yet even before a full accounting, two more corpses towards the growing total in still another town confirm that the modus operandi of the occupying forces is the same: random torture and executions of civilians, seemingly on a whim. 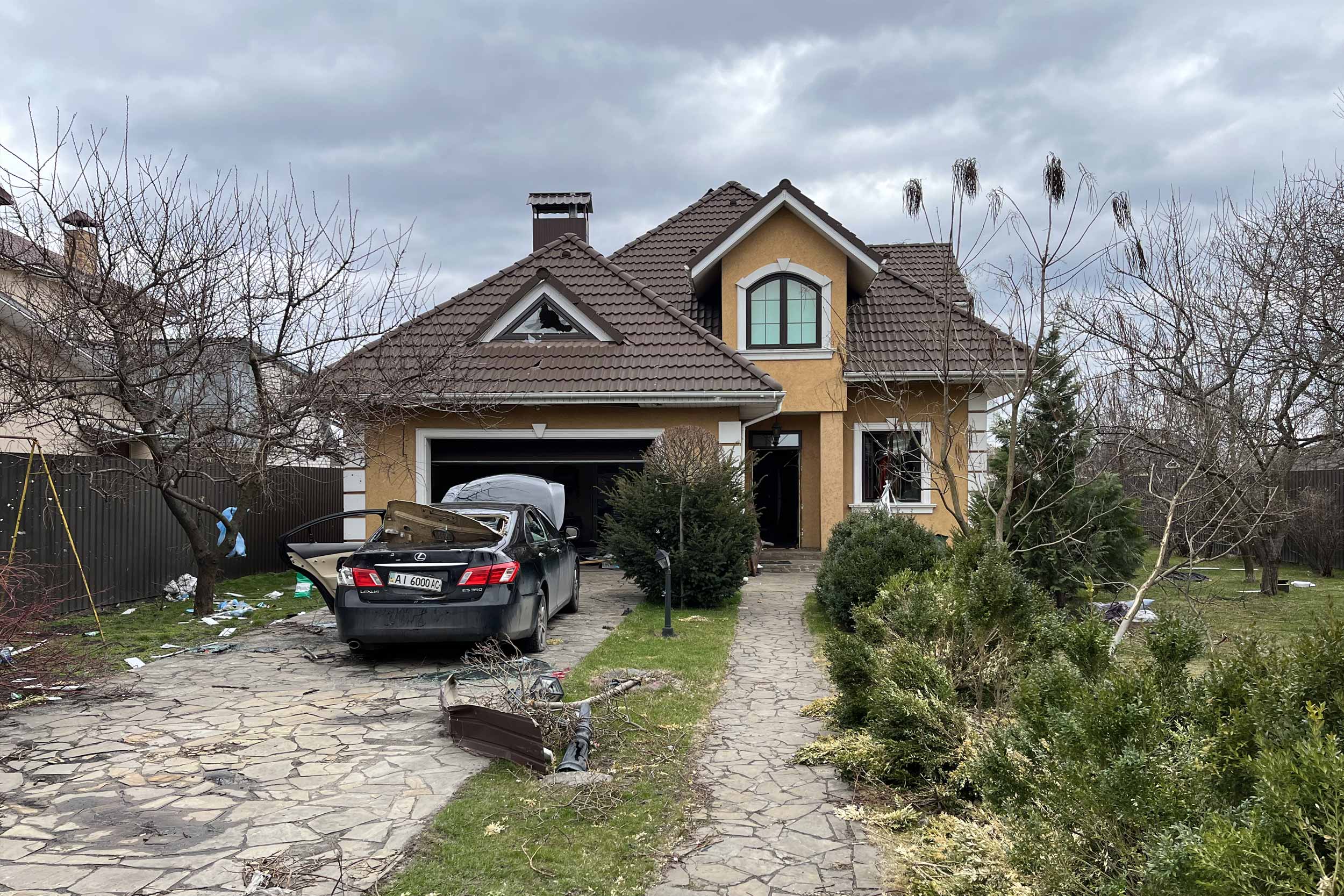 Sergei, 43, who worked at a local supermarket, could have been another.

“They took me away for execution four times, but each time they let me go,” he said. A former soldier who served in the Donbas in 2014, he had buried his military records – a precaution made marginally less necessary when his entire house was shelled and destroyed.

He said that several of his friends who served with him in the military went missing during the occupation, and he had not heard any information about them since.

As the fighting shifts to the east and the south, the focus will be on shelling and fighting, and on those seeking to flee. But Hostomel underlined that, while corpses are still being found around the capital, it must be all-but certain that more torture and new executions are taking place in Russian-occupied areas.

“These people killed here, it is not a one-off,” said Roman Sulzhyk, 47, a senior Ukrainian banker and former vice president at JP Morgan in New York, who was translating for me on the journey. “Until this occupation is over, someone else is being is killed and raped right now wherever Russians are in control.” 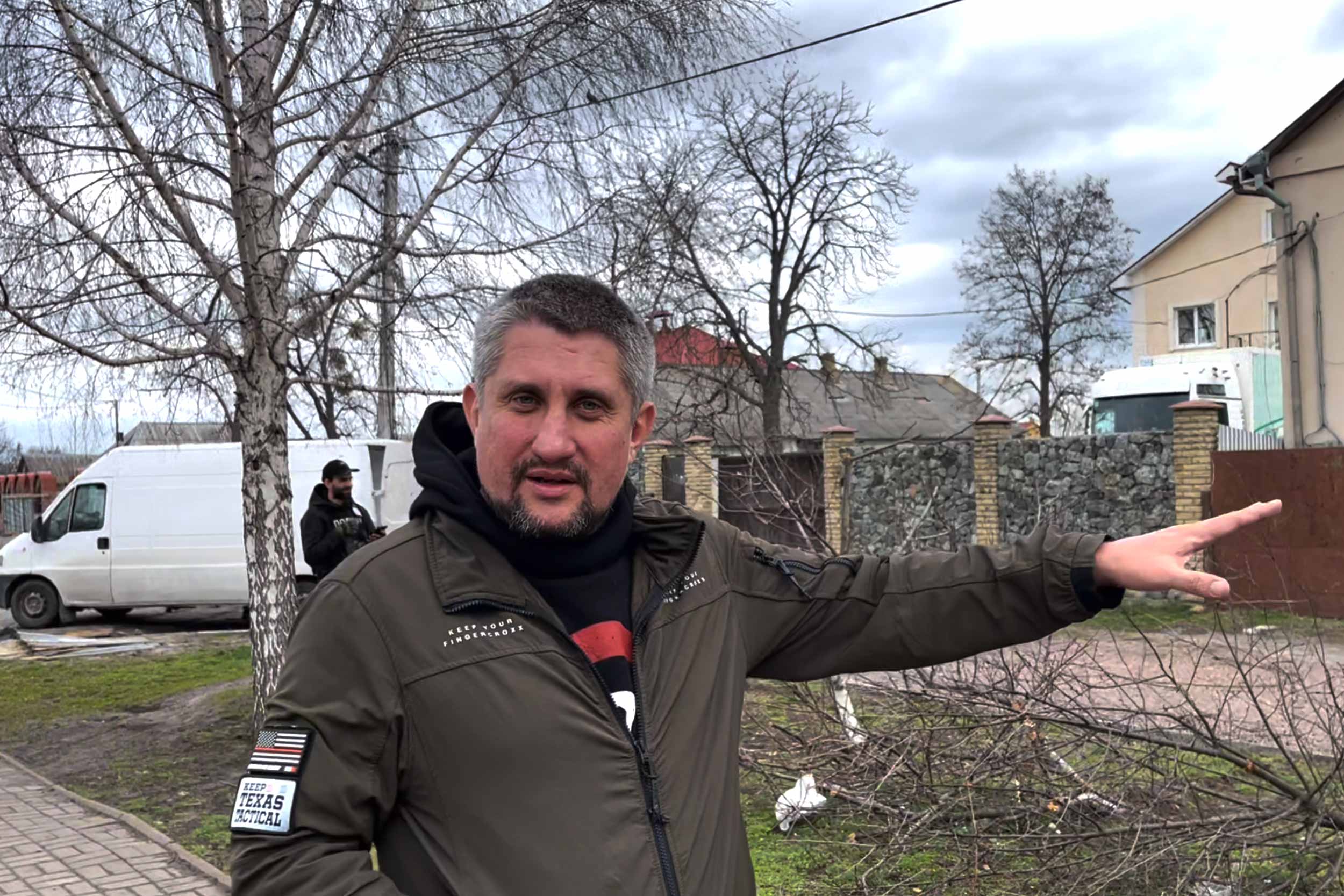 It is only after territories are freed of Russian control that the bodies will be found. But they must be there, with their number increasing every day.

Each conflict has its iconic images of suffering and death; Bosnia with its mass graves, Rwanda with its machetes, Syria with its barrel bombs.

The image of Ukraine is now minted: along with the Mariupol theatre, the decaying corpses – tortured, bound and executed – lying in the street or even in their own suburban front yard.

Driving from the north back to the capital through a woodland and agricultural area, we passed a sporty young couple, in Lycra and baseball caps, pulled over by the side of the road with bicycles. They flagged down a Ukrainian police car ahead of us.

Off in the ditch was yet another body, half covered with a blanket, partially chewed by animals.

“We saw this person shot by Russians a week ago,” said the woman. They had covered him, and expected someone to come take him away.

She said that down the road and into the woods, three humanitarian aid volunteers in a car had been fired on by Russians, and those bodies were also still there.

The police said they would pass the information to the appropriate team.

No doubt a white Transit van will be out tomorrow.