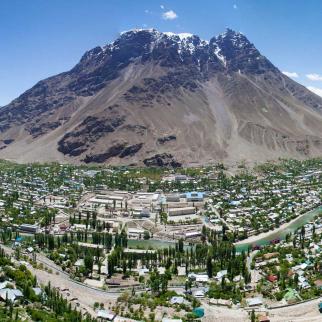 Tajikistan’s rights groups warn against an uptick in the harassment and intimidation of journalists after independent reporters Daler Imomali and Abdullo Gurbati were detained in mid-June in the capital Dushanbe.

The detentions come amid increasing pressure on media workers, which have triggered fears that the human rights’ situation would worsen amid the authorities’ crackdown on street protests in the country’s Gorno-Badakhshan Autonomous Region (GBAO).

Imomali’s popular YouTube channel, which has over 150,000 subscribers, covers social issues and citizens’ complaints about the authorities’ alleged abuses of power. Gurbati is the channel’s camera operator.

On June 15, the police detained the two for “illegal entrepreneurship” and on June 18 a Dushanbe court sentenced them to two months in pre-trial detention. Imomali is charged with “conducting illegal business” and “providing knowingly false information about a crime,” while Gurbati is under investigation for assaulting a police officer, which he denies.

Nuriddin Karshiboev, chairman of the National Association of Independent Media of Tajikistan (NANSMIT), told IWPR that criminal cases against reporters served as a means of deterring them from doing their jobs.

“Journalists should not be oppressed or harassed,” he said, adding, “The recent incidents involving independent media are an attempt to control the information space and put pressure on independent journalists and the media.”

A CHAT AT THE ATTORNEY’S OFFICE

On June 4, Imomali was “invited for a talk” to the prosecutor’s office of Dushanbe’s Shohmansur district after airing a report about the demolition of housing in the capital’s Panjshir area. He was released only after deleting the video.

In a video titled Where Was Daler Imomali for Five Hours? posted on the same day, the blogger said that the prosecutor hit him several times, with the main claim against him that the journalist did not provide the authorities’ opinion in his report. The blogger said that he tried to talk to a representative of the prosecutor’s office but was told that they would only speak off camera.

It was Imomali’s second interrogation over three months. He has stated that he felt “tired and drained” after the interrogations and that if the authorities continued like this, he would give up journalism.

The downwards spiral in media freedom comes amid deadly unrest in the eastern GBAO region. On May 17, the day after street protests started in Khorog, GBAO’s administrative centre, Tajikistan’s largest news agency Asia Plus announced it would not cover the events.

“Asia-Plus received an official warning from the prosecutor general’s office and an unofficial warning from other government agencies that our media covers events in GBAO ‘from only one perspective’ and ‘destabilises the situation in the country’,” the statement read, adding that the outlet was ordered to “eliminate these shortcomings” or be shut down.

The web portal your.tj also announced that it would not cover developments in GBAO.

“We do not have a reporter in Badakhshan, so we cannot check all the information,” its Facebook post read. “Only official news is available now but these reports have raised many questions that have no answers.”

All other Tajik media reprinted official reports. Several state and independent media executives confirmed to IWPR that they were instructed by the authorities not to publish information other than reports from official sources.

The only media that continue to provide independent coverage are Radio Ozodi, RFE/RL’s Tajik service, and Current Time, the Russian-language TV broadcasting via RFE/RL.

However, their reporting came with a price. On May 17, four journalists from the two outlets were attacked in Dushanbe after speaking to Ulfatkhanum Mamadshoeva, a civil society activist who the authorities claimed was behind the protests in Khorog. Attackers seized the journalists’ phones and video cameras.

One of them, Mullorajab Yusufi, said that the attackers did not say who they were or what they wanted, but clearly knew the journalists well and aimed to take their cameras and phones.

“One of them said, ‘Mulloradjab, I swear to God, I will shoot you!’ I got two or three punches. They took my phone and wallet. They [then] returned the money to me but took everything else with them,” he told reporters after the attack.

Current Time’s reporter Anushervon Orifov and a cameraman were attacked on their way to Mamadshoeva’s house for a scheduled interview and robbed of equipment worth over 9,000 US dollars.

The ministry of internal affairs stated it had opened a criminal case for robbery. Yusufi told media that on May 28, a man approached him in the street and said that if the criminal investigation was withdrawn, he would get back his phone and other equipment. If not, he should start thinking about the safety of his family members.

In GBAO local journalists were summoned to the state committee for national security for questioning. On May 22, Asia-Plus journalist Ramziya Mirzobekova was questioned about her friendship with Mamadshoeva and her computer and phone were confiscated.

She told IWPR said that officers were polite and that she felt neither pressured nor threatened. Her only concern was that after talking to them, two posts on Facebook then accused her of collaborating with Andrey Serenko, who heads the Centre for Contemporary Afghan Studies in Moscow.

“It was posted by a fake account,” she said. “I am in no way linked and have nothing to do with Serenko. I only once asked his opinion on the situation in Afghanistan as an expert in a chat.”

Imomali and Gurbati’s detention caused an uproar in Tajikistan and abroad, with Human Rights Watch, the Committee to Protect Journalists and Reporters Without Borders calling on the authorities to drop the charges against them and end harassment against media.

On June 6, the independent no-profit Media Council published a statement calling on the authorities to stop the pressure on journalists and to thoroughly investigate the assaults.

Eleven media organisations signed the document. These include Sadoi Mardum, a publication of the Tajik parliament; Minbari Halq, affiliated to the ruling People’s Democratic Party and the independent USSR newspaper.

“Times have shown that no one needs journalistic organisations, no one listens to their words,” he told IWPR. “All further steps and efforts are useless and the pressure on journalists will continue.