As authorities pledge reconstruction, some residents of the south are voting with their feet.

As authorities pledge reconstruction, some residents of the south are voting with their feet. 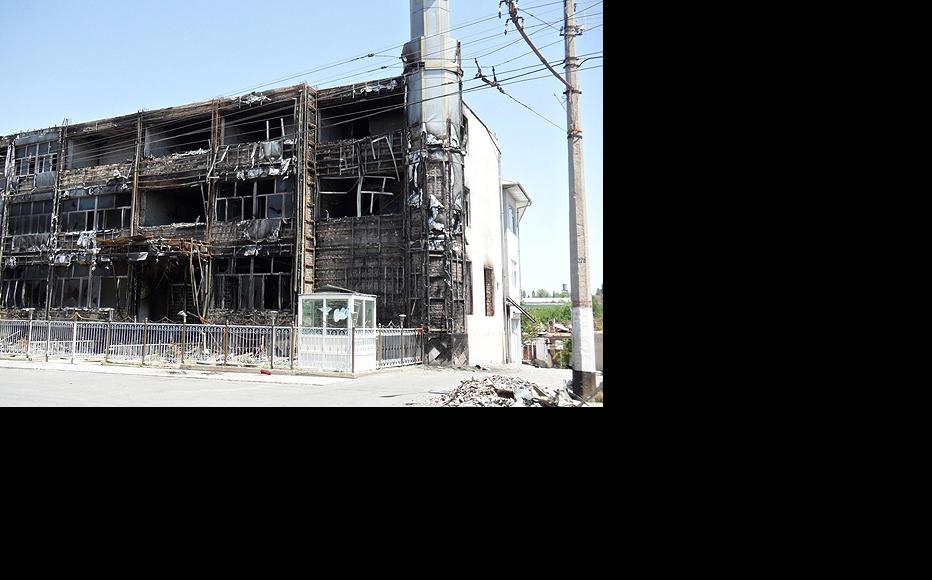 Southern Kyrgyzstan suffered serious damage in arson attacks during the June violence. This shell of a building is all that remains of a department store in Osh. (Photo: Pavel Gromsky) 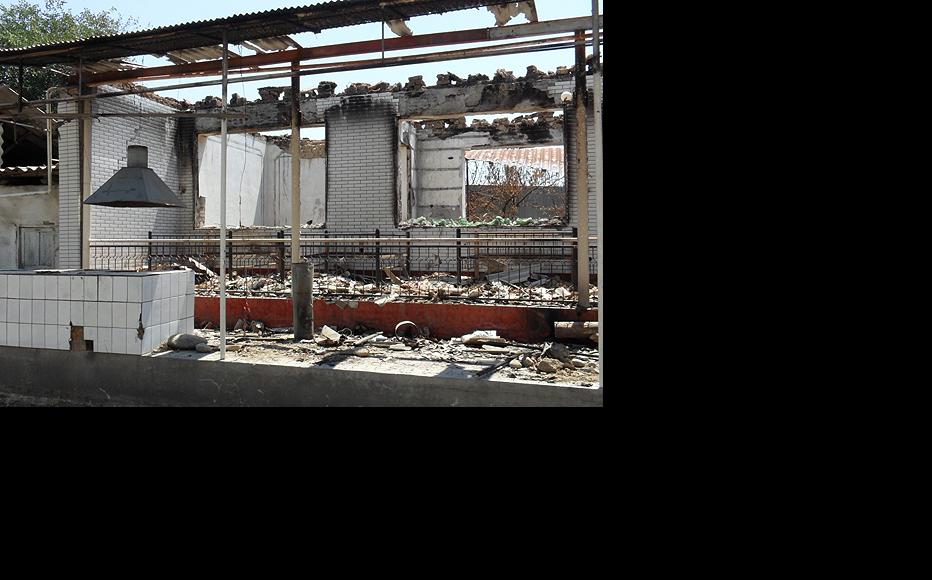 Small-scale private business has always flourished in the south. Many owners have seen shops and cafes, like this traditional teahouse in Osh, gutted by fire. (Photo: Pavel Gromsky) 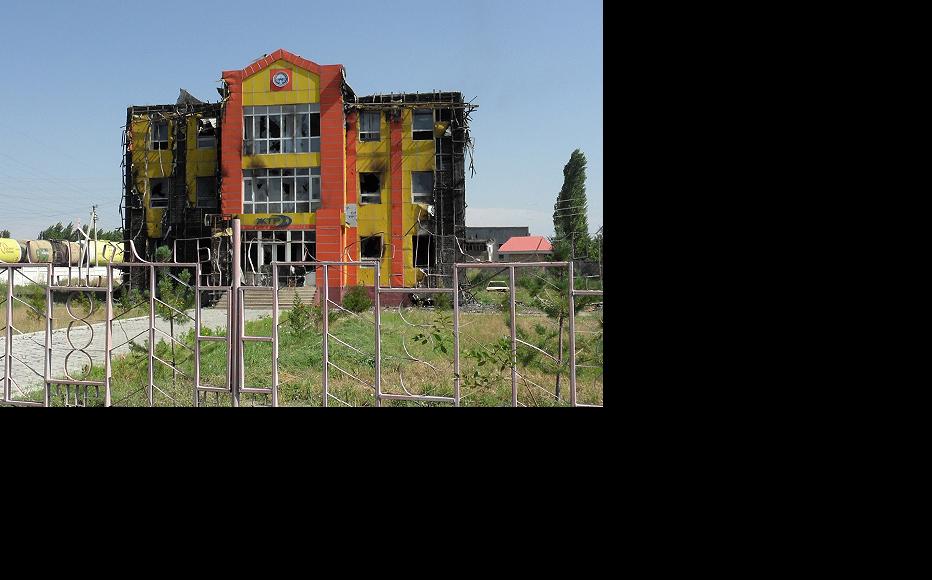 Infrastructure will take years to rebuild. This partly blackened façade belongs to the TV station in Jalalabad. (Photo: Pavel Gromsky)
The link has been copied

The authorities in Kyrgyzstan say they have a clear plan for rebuilding parts of Osh and Jalalabad damaged in June’s ethnic violence, but many residents of the south are quietly leaving either until things settled down or else for good.

Officials say the immediate rebuilding work will take at least two years and half a million US dollars, while full recovery from the devastation could take up to a decade.

“We will restore Osh whatever it takes so that people can return to their homes,” head of state Roza Otunbaeva said on June 18. “We plan to rebuild everything that has been destroyed.”

Although Kyrgyzstan had suffered intermittent bouts of unrest since mass demonstrations forced Kurmanbek Bakiev from presidential office in April, few could have predicted the scale and ferocity of the violence that broke out in Osh overnight on June 10-11 and spread later to neighbouring Jalalabad and areas around the two cities.

The government says 330 died in the bloodshed, and 400,000 people were temporarily displaced. Numerous homes were burned down in deliberate arson attacks.

At the end of June, the authorities set up a State Agency for the Reconstruction and Development of Osh and Jalalabad. On a visit to Osh, Deputy Prime Minister Jantoro Satybaldiev, appointed head of the agency, spelled out the plans.

First, ten new multi-storey blocks will be built, starting in August, and apartments there will be offered to public-sector workers such as doctors, teachers and police who lost homes during the violence.

Satybaldiev said people left homeless would be offered three choices – a flat in an apartment block, assistance to build a house on a new site, or monetary compensation.

Osh is a sprawling city, the second largest after the capital Bishkek. Officially, it has a population of over 240,000, but if outlying suburban areas are taken into account, this rises to half a million.

Satybaldiev said 70 per cent of city residents live in one-storey houses, often with no running water.

“These neighbourhoods count as the ‘red zone’ and they are to undergo capital reconstruction,” he said.

Many of the traditional Uzbek suburban districts known as “mahalla” fit Satybaldiev’s description. The authorities have been equivocal about what they will do if people are happy living where they are and do not wish to move away from their home and community, even for the sake of better-quality housing.

“This is our position: we won’t resettle anyone by force. We will treat everyone as an individual,” Satybaldiev said. But he added, “If the houses that have suffered damage are in the ‘red zone’, we’ll propose that the owners rebuild in a different district.”

Satybaldiev said the main market in Osh should be relocated outside the city centre, as the current premises were unsanitary.

Jumakadyr Akeneev, an economist and former agriculture minister, told IWPR that reconstruction was not going to be an easy process.

“Rebuilding will take place gradually, in stages, so as to be able to find the required funding,” he said.

He predicted that the costs would have a significant effect on the rest of the country, as the bulk of expenditure would have to be funnelled to the south.

“Kyrgyzstan’s economy will be set back by five years,” he said.

In the south, the economic impact has been more immediate. With around 170 shops, six markets and more than 100 cafes and other sites damaged or destroyed in Osh alone, the private trade sector has been badly dislocated.

Agriculture in surrounding areas has also been hit. Akeneev said many Uzbek farmers had to abandon their fields because of the unrest.

“As a result, I estimate that, only 40 per cent of the usual harvest of fruit and vegetables will be produced,” he said, adding that this was already apparent in rising prices in north as well as south Kyrgyzstan.

IWPR editor Inga Sikorskaya, who was in Osh during the violence, said there were no signs of reconstruction going on when she revisited the city last week. Cafes and restaurants were shut, the normally packed streets around the main retail market were empty, and the food market was open only three or four hours a day.

Many residents of Osh are leaving, either in the hope of returning when things improve, or of settling down somewhere else permanently.

Adilet Azimkanov moved his family to the Kyrgyz capital, and says, “We are forced to remain in Bishkek with no belongings, with nothing, because we only had five minutes to pack and get out. It was a totally spur-of-the-moment decision…. We don’t have any relatives here, so we’re renting a flat and living off what resources we have.”

Asked about his plans, Azimkanov said, “I don’t know, frankly. It’s the one question I can’t answer. It’s one thing when things are peaceful and you can make plans, but it’s quite another when you get swept away by the tide of such tragic events.”

He said continuing concerns about security were the main reason why the family was hesitating about going back to Osh.

Samat Bolobaev is still in Osh but is about to leave, the main reason being worries about his children’s safety.

“They need to start going to school and kindergarten on September 1, and I’m concerned for them,” he said. “I believe there won’t be many children at school, as it isn’t just Uzbeks, but also Russians and Kyrgyz, who are leaving.”

Bolobaev said that among his friends, the Uzbeks and Russians were leaving to settle in Russia, whereas the Kyrgyz were planning to stay away only temporarily.

He confirmed reports from other observers that Osh was subdued and emptier of people than usual. Most of the people still going to work were employed in the public sector, whereas the privately-owned shops and cafes were often shut.

Construction worker Mirzohid said that he was considering going to Russia for a time as he was running out of money. But he said he would be coming back. “I have elderly parents here. I need to take care of them when I have money and other opportunities,” he said.

Hakimjan, who works as a restaurant chef in Osh, said he too would be heading for Russia. He had been planning to do so anyway as he has relatives there, but the violence accelerated his decision. The restaurant where he works was largely undamaged, but business has been slow to pick up.

Salijan, who drives a minibus taxi in the city, said his business had suffered, too. “I’m transporting fewer passengers, and it’s hit my earnings,” he said.