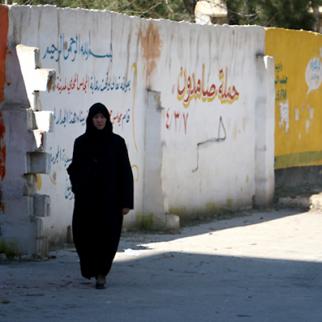 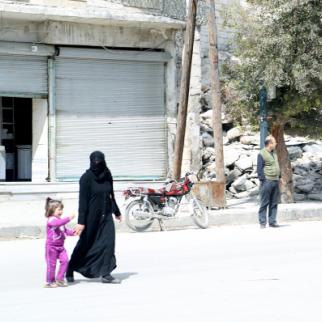 A woman and her daughter cross the street in front of a destroyed building in the al- Marja neighbourhood. (Photo: Hussam Kuwaifatiyeh) 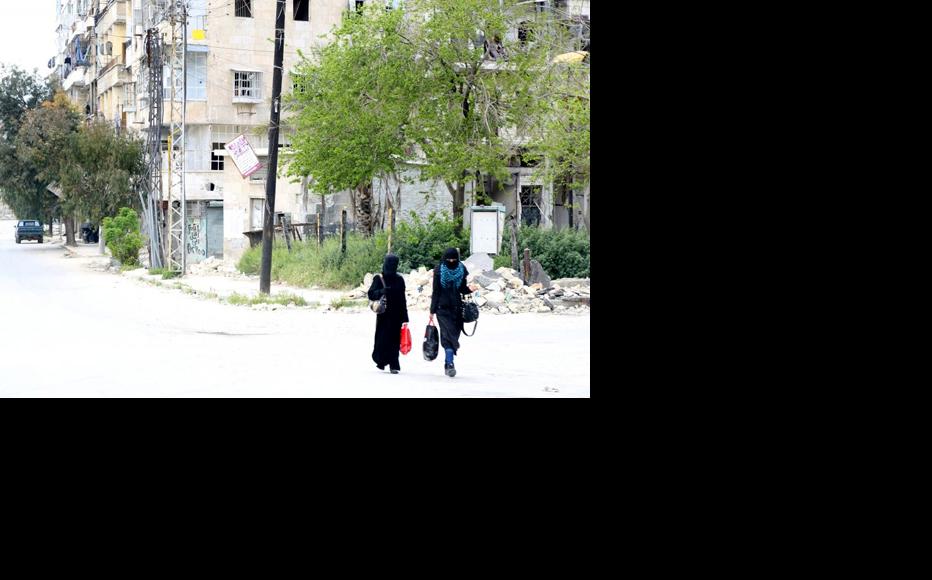 Two women walk through the al-Shaar neighbourhood. (Photo: Hussam Kuwaifatieh)
The link has been copied

Don't ever make a friend during wartime. There’s a role for you to grieve as a mother, a sister, a wife, a lover, but not as a friend.

Let me tell you the story of one 19 year-old girl. It’s an age that’s supposed to be one of the best of your life, full of the passion of the first year of university, of high heels and makeup.

This girl left Aleppo after her university closed, travelling  to Egypt with a suitcase prepared for a two week stay. This turned into three months, and she faced boredom, anxiety, guilt, helplessness, shame, even grief. These are things a 19 year-old shouldn't experience.

The one day, on Facebook, his picture appeared framed by a thick black band.

Below, the messages, "To Allah we belong and to him we shall return, say al-Fatiha [a verse recited for the dead] for his spirit, September 4, 2012".

She crazily jumped from one Facebook page to another, from one post to another, she asked his friends to stop kidding and screamed at the screen.

She sat silently next to the phone for a full hour, before she pressed the call button and listened once more to a cold voice asking her to try again. She kept doing that, but he didn't answer to tell her that she's right and they're all liars.

She entered the bathroom and locked the door, she broke down completely, she felt the walls closing down on her, she kept crying and crying.

To be precise, Amer was killed. He was killed by a sniper, he was sitting in his house, the sniper pulled the trigger and took away my friend.

When I used to demonstrate at the university of Ebla, I did not hesitate to shout for freedom because I knew I could look at the first floor window where Amer used to stand, quietly smoking, sometimes cheering, sometimes angry at me, other times encouraging.

The area was fenced off on all sides, filled with informants and thugs. But he was there and that's what made me feel secure.

This 19 year-old girl discovered, then, that she does not have the right to grieve. She will be asked what kind of relationship she shared with this young man, it is not normal that all this sadness is just for a friend. Others think the world will collapse because of her sadness, they ask her to believe in God and to accept his will, her friends confide that they were betting on her secret relationship with him and the man who once loved her will not call to console her, thinking she posted Amer’s picture online to make him jealous.

They steal your right to sorrow. I am not the mother of a martyr, nor the widow of the martyr, I am not his betrothed, so my sadness turns into this dark romance that the audience loves. I am just a friend.

These details don't interest anyone.

You have to travel alone down the path of depression, because no one will recognise the sadness of this 19 year-old girl. You have to attend your graduation alone and take a picture which is missing a vital person and grieve him alone, always alone.

In my country, friendship is worse than love. It can turn a 19 year-old girl into an old woman if she's not careful. It can turn going to university into real torture. It will make you look for his face everywhere.

Farah Youssef holds a degree in political science and international relations. She used to live in Aleppo until October 2016. She currently lives in France.