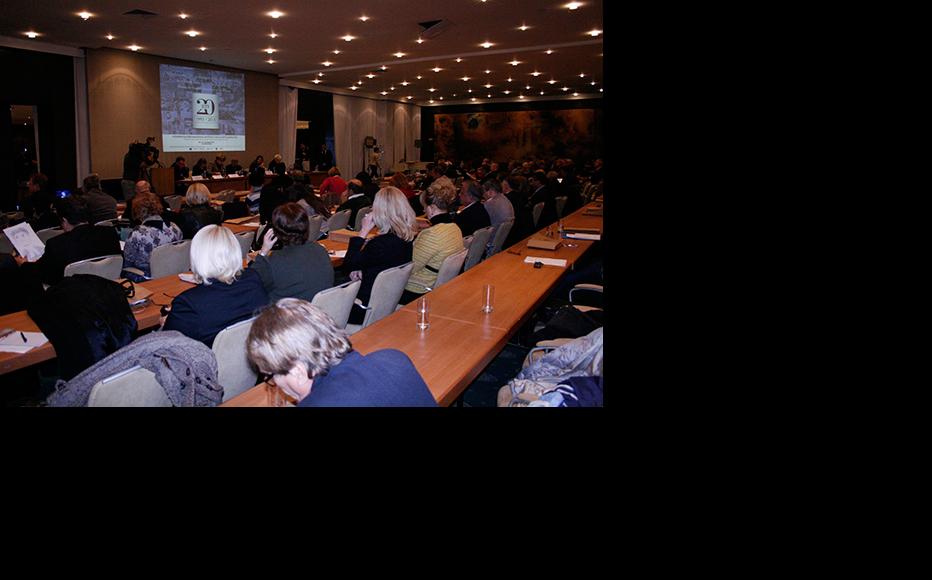 ICTY 20th anniversary conference in Sarajevo. (Photo: ICTY)
The link has been copied

When the president of the Hague tribunal gave the keynote address at a conference in Bosnia last week, he was met by a silent protest by activists and survivors of the war of the early 1990s.

Judge Theodor Meron was speaking on November 27 at an event in the capital Sarajevo to mark the 20th anniversary of the establishment of the International Criminal Tribunal for the former Yugoslavia (ICTY). Attended by officials and transitional justice experts, the two-day conference covered the tribunal’s role and legacy in the former Yugoslav states.

As Judge Meron began speaking, representatives of victims’ associations turned their back on him. Another group held up a sign with the words “R.I.P. Justice” before walking out of the hall.

The protests reflect dissatisfaction with tribunal rulings reached in recent months, in which it freed three individuals involved in the Bosnian conflict. In March, the head of the Yugoslav army, Momcilo Perisic, was acquitted on appeal. Then in May, Jovica Stanisic, the wartime intelligence chief in Serbia, and his subordinate Franko Simatovic were acquitted of all charges at the end of their trial.

The court has also overturned the convictions of two senior Croatian commanders in that country’s conflict. Generals Ante Gotovina and Mladen Markac were freed on appeal in November 2012.

Continuing with his speech, the tribunal president acknowledged that not everyone was happy with the work of the ICTY.

“Some people claim that the tribunal has failed to fulfill the victims’ need for justice, some claim that our verdicts are controversial, while others still ask what our contribution to reconciliation and history is,” Judge Meron said.

Despite this, he said he believed that the tribunal had “exceeded expectations”.

Hatidza Mehmedovic, chair of the Mothers of Srebrenica association, was among those who did not share Judge Meron’s positive view.

She took part in the silent protest, and told IWPR that while she had “no personal grudge against Meron, nor against the tribunal as an institution”, it had made some grave mistakes.

“More has been done to hide the truth and keep it locked in documents on formal grounds than to prosecute slaughters, murders and rape that occurred in Srebrenica and elsewhere,” she said.

Mehmedovic was referring specifically to wartime transcripts of the Supreme Defence Council of Yugoslavia. Although these were used as evidence in the trial of the late Serbian president Slobodan Milosevic, ICTY judges took the controversial step of granting confidentiality measures to parts of the documents.

“In these documents, the truth about the 1995 genocide in Srebrenica is contained, and Mr Meron hasn’t done anything to help uncover that truth,” Mehmedovic said.

Natasa Kandic, the regional coordinator of RECOM, a regional network of civil society organisations, said she shared “a lot of the disappointment with some of the tribunal’s recent judgements, which showed once again that the victims’ need for justice has not been met”.

At the same time, she said, “We mustn’t forget that there are numerous positive contributions made by the tribunal, and that as imperfect as it may be, it has brought a number of crimes into the spotlight, and a number of perpetrators to justice.”

Speaking at the conference, senior officials from the national judiciaries of Bosnia and Serbia stressed that the ICTY had played a central role in establishing principles of post-conflict justice and promoting them in the region.

“The tribunal proved that all those who had committed any crimes would face sanctions,” Vladimir Vukcevic, Serbia’s chief prosecutor for war crimes, said, adding that the tribunal “played a key role when already in 1993 it sent a message to all the participants in the wars that one day they would be held accountable for their actions and crimes”.

Meddzida Kreso, president of the court of Bosnia and Herzegovina (BiH), highlighted the Hague tribunal’s role in fostering war crimes processes at national level. She said it would not have been possible to establish a separate war crimes chamber at the court of BiH without “a significant contribution from the Hague tribunal, its support, and its development of judicial practice”.

Murat Tahirovic, chairman of the Bosnian association of former prison camp detainees, acknowledged that there was a tension between the justice process and the expectations of those who suffered.

“This conference is just another reminder of this constant interchange between the constraints imposed by criminal procedures and criminal law on the one hand, and the victims’ need for justice on the other,” he told IWPR. “As the tribunal has grown, our understanding of it has grown, too. We now know which of its achievements to praise and which to criticise. That, too, is a valuable contribution to international justice in the future.”

Balkans, Serbia, Croatia, Bosnia and Herzegovina
Connect with us