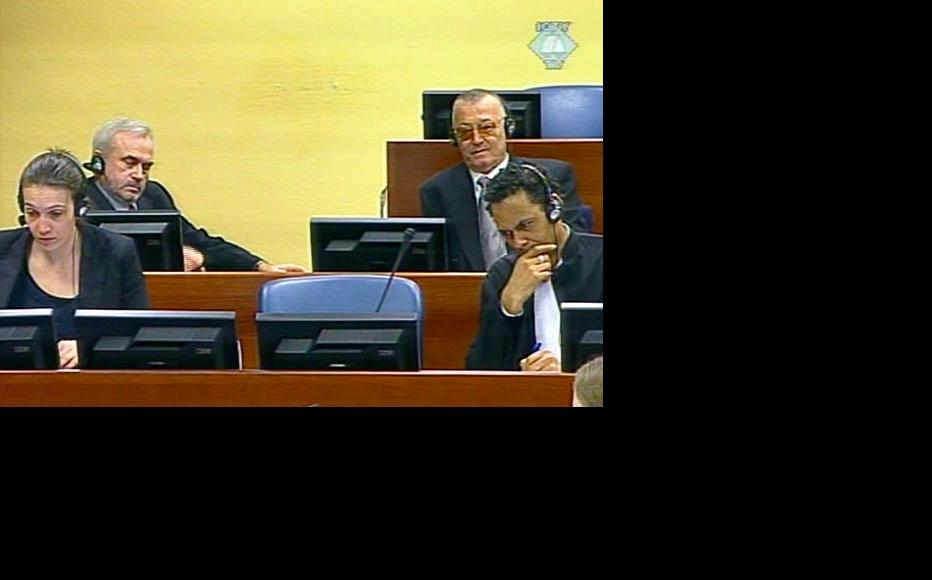 Jovica Stanisic, second from left, and Franko Simatovic beside him at the May 30 hearing. (Photo: ICTY)
The link has been copied

Serbia’s former intelligence chief and a senior officer in the service have been acquitted of all charges of war crimes and crimes against humanity at the Hague tribunal.

The May 30 verdict was issued at the end of the trial of Jovica Stanisic and Franko Simatovic.

Stanisic was head of Serbia’s State Security Service, or DB, and Franko Simatovic was his direct subordinate as commander of a special operations unit in the DB known as the Red Berets.

Judges ordered the immediate release of both men, who had been in detention since 2003.

At the conclusion of the hearing, Stanisic hugged his lawyer and seemed to be on the verge of tears. Members of the public gallery were instructed by security guards not to make any noise, but a shout and some gasps could be heard when the acquittal was announced.

Both Stanisic and Simatovic were accused of being part of a joint criminal enterprise which had as its goal the “forcible and permanent removal of the majority of non-Serbs from large areas of Croatia and Bosnia-Hercegovina”.

To this end, prosecutors alleged, Stanisic and Simatovic established, organised and funded covert training centres for paramilitary units and other forces from Serbia, which were then deployed in parts of Croatia and Bosnia to forcibly remove the non-Serb population.

Reading out the verdict to a packed public gallery, presiding Judge Alphons Orie said the evidence did show that paramilitary units, including Arkan’s Tigers and the Scorpions, “committed a large number of murders against Croats, Muslims and other non-Serbs in Croatia and Bosnia Hercegovina”.

The chamber also found that Stanisic and Simatovic founded the Red Berets, a special unit of the DB, and that Simatovic “cooperated with others” in establishing a training camp at Golubic, in Croatia, where training began in 1991. Red Beret members were then sent to other camps to train new recruits, and also participated in the capture of the Bosnian town Bosanski Samac in May 1992, as well as operations in Doboj from April to July of that year.

In addition, Stanisic and Simatovic “were in command of the unit and controlled its deployment and training activities through leading unit members”.

Despite this, Judge Orie said, “the evidence did not establish that the [two] accused personally directed the unit” during the operations in Bosanski Samac and Doboj, or that they “issued orders or instructions to commit the aforementioned crimes”.

As for other operations in which the Red Berets were involved, “the chamber did not find that unit members committed crimes”. In addition, “the chamber was unable to conclude that the accused directed or organised” other groups, such as Arkan’s Tigers and the Scorpions, that they “directed them in any particular operations”.

Nonetheless, the chamber found that “the accused must have known that the [Red Beret] unit members had committed crimes in Bosanski Samac and that it may have been reasonably foreseeable to them that the unit members would commit crimes in Doboj”.

The chamber noted that one witness testified that Stanisic arrived at a Croatian Serb government building in Dalj in September 1991 and began “yelling at people, berating them because Vukovar had not surrendered yet”.

Afterwards, Stanisic reportedly called a meeting with top officials before returning to Belgrade, but the chamber say it was not given evidence about what was discussed there.

A majority of two out of three members of the bench, with Judge Michele Picard dissenting, found that Stanisic’s actions in relation to Vukovar could reasonably be interpreted as support for a successful military takeover of [the town],” Judge Orie said.

Therefore, the majority “did not consider that the only reasonable inference from Stanisic’s actions with regard to the unit was that he shared the intent to further the alleged joint criminal enterprise”.

Instead, the majority “allowed for the reasonable possibility that Stanisic’s intention in relation to the unit, including the training of other Serb forces… was limited to establishing and maintaining Serb control over large areas of Croatia and Bosnia-Hercegovina”.

As for Simatovic, the chamber found that he “participated in a discussion of the objectives of the attack on Lovinac [in Croatia], which included the objective to have as much of the local population leave as possible in order to establish a purely Serb territory”.

In Vukovar, Simatovic was present at meeting before the fall of the city in November 1991, and at a celebration afterwards.

“Considering that the content of the meeting was unknown to the chamber, and noting that members of the [Red Berets] did not participate in the attack, the majority, Judge Picard dissenting, allowed for a reasonable interpretation that Simatovic’s intent was limited to support for the successful military takeover of Vukovar,” Judge Orie said.

As for whether the defendants aided or abetted the crimes in question, Judge Orie noted that their contributions to the Bosanski Samac and Doboj operations did “assist in the commission of crimes”. However, the majority view was that the assistance which the accused rendered in these two operations “was not specifically directed towards the commission of the crimes of murder, deportation, forcible transfer or persecution”.

“Rather, [the evidence] allowed for the reasonable conclusion that the assistance was specifically directed towards establishing and maintaining Serb control over these areas,” Judge Orie said.

The majority arrived at the same finding with regard to the defendants’ involvement with other groups, and was “unable to conclude that the accused aided and abetted crimes perpetrated” by Arkan’s Tigers, Serb police units in Croatia, the Scorpions, and others.

The controversial standard of “specific direction” cited here was used to acquit former Yugoslav army chief Momcilo Perisic on appeal in March, and has been invoked in other proceedings since then. (See Do Overturned Convictions Undermine Hague Tribunal? on this issue, and Yugoslav Army Chief Acquitted on Appeal on the Perisic case.)

Judge Michele Picard dissented from nearly all the conclusions of the majority, and set out her own separate opinion in written form. She stated that “many of the findings made with regard to the involvement of the accused do not… address the reality of their actual involvement”.

She stated that she could not “embrace the opinion” of her colleagues that “the evidence in our possession could give rise to multiple reasonable interpretations”.

“Quite to the contrary, I am of the view that the sole reasonable interpretation of the vast amount of evidence that the trial chamber has received is that the accused shared with the other members of the joint criminal enterprise the intent to establish their control over the regions pertinent to the indictment by deporting the non-Serb population by criminal means,” Judge Picard wrote.

She stated that Stanisic and Simatovic maintained “close ties” with the criminal groups that committed crimes in Croatia and Bosnia and provided them with “robust support”.

“Any ambiguity regarding their criminal intent has been swept away,” she wrote. “My colleagues have reviewed the evidence in an isolated fashion in the course of reaching their conclusion, whereas it is my profound conviction that it is when one surveys the entire picture that one is able to view the situation as it really was.”

Serbia, Croatia, Bosnia and Herzegovina
Connect with us