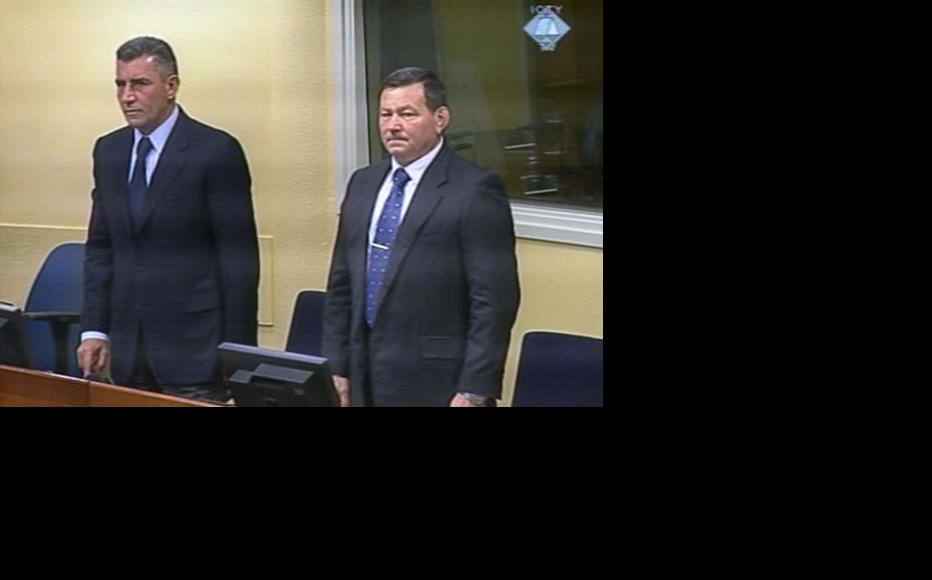 Ante Gotovina (left) and Mladen Markac in the ICTY courtroom. (Photo: ICTY)
The link has been copied

In April 2011, Gotovina was found guilty of ordering unlawful and indiscriminate attacks on Serb civilians during 1995’s Operation Storm offensive, and sentenced to 24 years in prison.

He was also found to be responsible for the deportation of at least 20,000 Serb civilians from the Krajina region of Croatia, as well as for the murder, persecution and cruel treatment of Serb civilians. In addition, he was convicted on counts of plunder and wanton destruction.

On November 16, appeals judges in The Hague reversed all those findings.

One of Gotovina’s co-defendants, special police commander General Mladen Markac, was also fully acquitted by appeals judges this week and immediately released from detention. In the original judgement, he was convicted of eight of the nine counts in the joint indictment, and sentenced to 18 years in prison with credit for time served.

The third co-defendant, Knin garrison commander General Ivan Cermak, was acquitted of all charges in April 2011, and was thus not part of this appeal.

When presiding Judge Theodor Meron announced that the convictions against both Gotovina and Markac had been overturned, the packed public gallery erupted in cheering and applause. Several supporters wiped away tears.

After the hearing was adjourned, Gotovina and his lawyers could be seen hugging and shaking hands.

Reading out the verdict, Judge Meron noted that the original trial chamber had concluded that both Gotovina and Markac were part of a joint criminal enterprise, JCE, with other members of the Croatian political and military leadership. The aim of this JCE was the “permanent removal of the Serb civilian population from the Krajina by force or threat or force”.

Both men were convicted as members of a JCE, not under any other form of liability.

In their appeal, defence lawyers argued that artillery attacks on the towns of Knin, Benkovac, Obrovac and Gracac were not unlawful, and that without a finding that they were, the “conclusion that a JCE existed cannot be sustained”.

In the appeals verdict, Judge Meron said that the original trial chamber had used the distance between an impact site and the nearest identified artillery target “as the cornerstone and organising principle” for determining whether shells were aimed at lawful military targets.

He said the trial chamber had erred in its finding that all shell impacts located more than 200 metres away from a legitimate target “served as evidence of an unlawful artillery attack”.

The appeals judges found that the original judgement “contains no indication” that any of the evidence “suggested a 200-metre margin of error”. They said the judgement was “devoid of any specific reasoning as to how the trial chamber derived this margin of error”.

As a result, the trial chamber’s shell impact analysis “cannot be sustained”.

“The appeals chamber… finds that no reasonable trial chamber could conclude beyond a reasonable doubt that the four towns were subject to unlawful artillery attacks,” Judge Meron said.

The appeals chamber ruled that the trial chamber’s conclusion that a JCE existed “rested primarily on the existence of unlawful artillery attacks against civilians and civilian objects in the four towns”.

“Furthermore, the trial chamber did not find that either of the appellants was directly implicated in Croatia’s adoption of discriminatory policies,” Judge Meron said.

The appeals bench thus decided that no “reasonable trial chamber” could conclude that the “only reasonable interpretation of the circumstantial evidence… was the existence of a JCE with the common purpose of permanently removing the Serb population from the Krajina by force, or threat of force”.

Having determined there was no JCE, Judge Meron said the appeals chamber considered whether convictions could be made on the basis of other modes of liability, such as aiding and abetting, or superior responsibility.

Judge Meron noted that the original trial chamber had found that Gotovina was aware of crimes allegedly being committed, but he failed to investigate or follow up.

“The trial chamber concluded that Mr Gotovina failed to make a serious effort to investigate the crimes and to prevent future crimes,” the judge said. “However, the appeals chamber… considers that the trial chamber’s description of the additional measures that Mr Gotovina should have taken was terse and vague, and it failed to specifically identify how these measures would have addressed Mr Gotovina’s perceived shortcomings in following up on crimes.”

As a result, the appeals chamber found that “the evidence on the record does not prove beyond reasonable doubt that any failure to act on Mr Gotovina’s part was so extensive as to give rise to criminal liability pursuant to aiding and abetting or superior responsibility”.

The decision to overturn the convictions was not unanimous, and two of the five judges attached lengthy dissenting opinions to the 50-page appeals judgement.

One of them, Judge Carmel Agius, stated that the “majority seems to lose sight of the essential question in this appeals case, being whether, based on the totality of the evidence, it was reasonable for the trial chamber to conclude that the attacks on the four towns were unlawful.

“At every turn, rather than looking at the totality of the evidence and findings, the majority takes an overly compartmentalised and narrow view.”

Judge Agius also argued that the evidence would support the conviction of Gotovina and Markac on the basis of superior responsibility.

In the second dissenting opinion, Judge Fausto Pocar discussed the “sheer volume of errors and misconstructions in the majority’s reasoning” and “the fact that the appeal judgement misrepresents the trial chamber’s analysis”.

He argued that the majority used incorrect legal standards when evaluating the 200-metre issue, and said that “the paucity of the legal analysis… opens more questions then it provides answers”.

“I fundamentally dissent from the entire appeal judgement, which contradicts any sense of justice,” Judge Pocar concluded.