Strong nationalist sentiments on both sides mix with fatigue over the unending conflict. 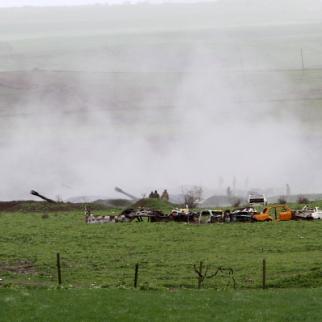 Heavy fighting between the armies of Nagorny Karabakh and Azerbaijan on the frontline, April 3, 2016. (Photo: Photolure Agency)

Strong nationalist sentiments on both sides mix with fatigue over the unending conflict. 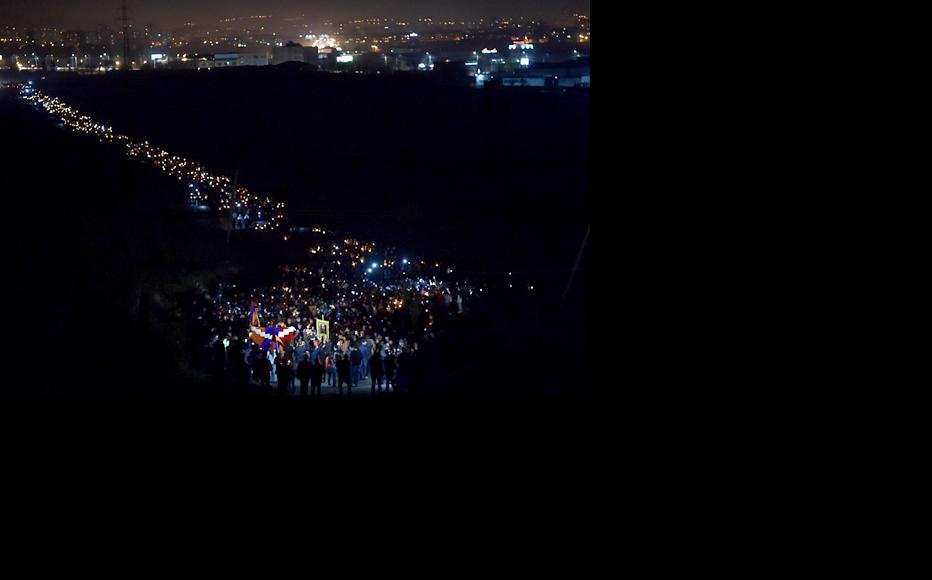 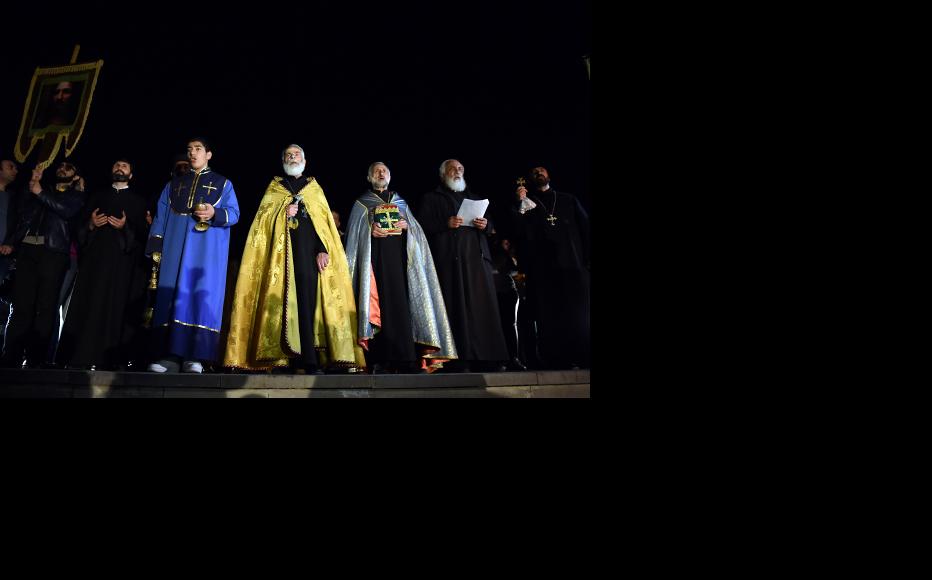 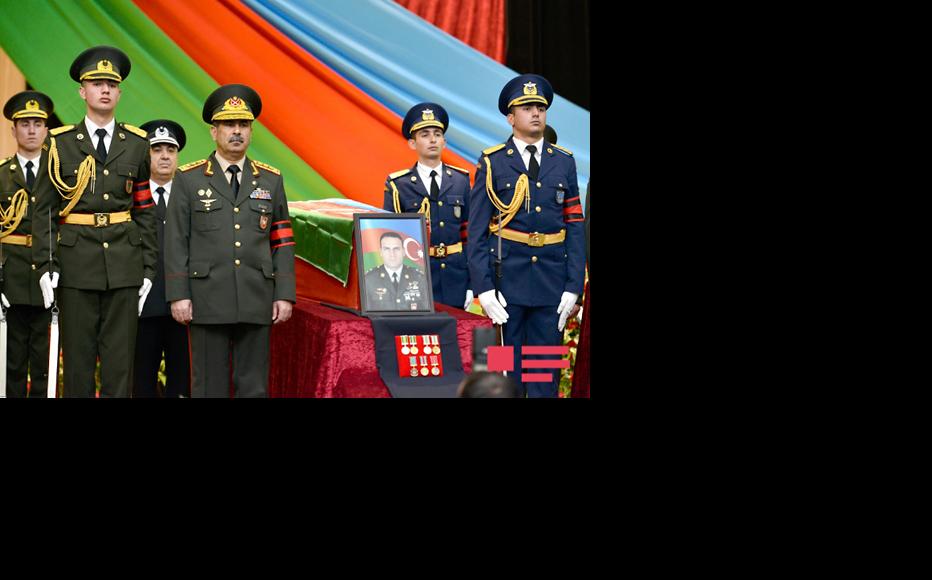 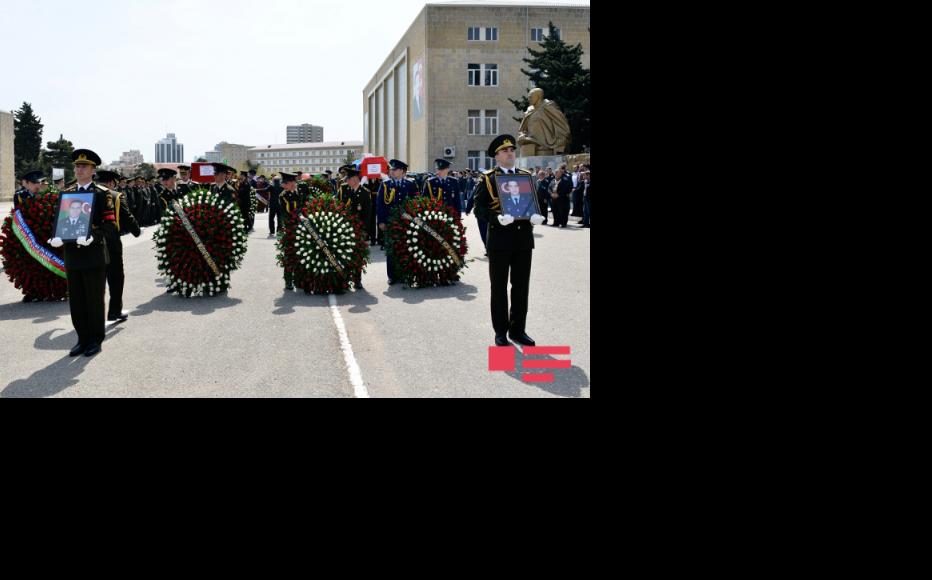 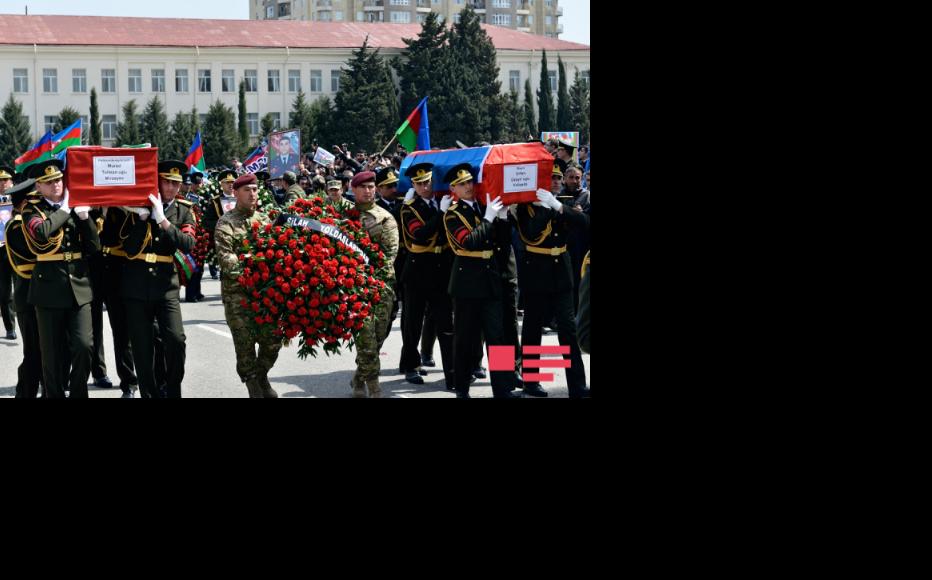 Funeral of Azerbaijani soldiers in Baku. (Photo: APA news agency)
The link has been copied

Villagers displaced by the worst violence around Nagorny Karabakh for decades say they will struggle to rebuild their lives, despite a newly-agreed truce.

More than a dozen civilians living on the frontline were killed and many more injured after fighting broke out between Azerbaijani forces and the Armenian-backed Karabakh army in the early hours of April 2.

Although both sides repeat continue to hold strong nationalist sentiments, frontline residents say they are exhausted by the loss of life and destruction.

War in the early 1990s left a local Armenian administration in control of Nagorny Karabakh, an enclave of about 150,000 people inside Azerbaijan.  Around 30,000 people died before a ceasefire was agreed in 1994.

Following the exchange of fire, several hundred villagers from frontline settlements in Nagorny Karabakh were evacuated to the capital Stepanakert, most of them women, children and the elderly.  The men, after moving their families to safety, returned to their villages to guard their homes.

Amongst the worst affected were the villages of Talish and Madaghis in Karabakh’s Martakert region, only three kilometres away from the line of contact.

“At night, we heard the firing,” said Sveta Zalunts, a 54-year-old grandmother of eight from Talish. “After that, the bombing started.  At dawn, I think I saw Azerbaijani soldiers on the outskirts of the village… By morning, we were all evacuated in lorries.”

Zalunts, with her four daughters and eight grandchildren, was among the evacuees sheltered in three private hotels, where they were provided with food and medical care.

Born and raised in Talish, a settlement of only 900 people, Zalunts lived through the war of the 1990s.

Then, she said, the villagers would have time to escape to safety during outbreaks of fighting.

“But this time, [the Azerbaijanis] bombed endlessly time and time again.  There was a feeling that they want to keep everyone under a rain of shells,“ she said.

When they fled on April 2, the family left everything behind. After the ceasefire on April 5, Zalunts went back briefly to get clothes and essential documents. “There is no house in the village that has not been shelled.  Some houses have been completely destroyed,” she said.  “In our barn, I found our duck with its ducklings.  I have no idea how they survived. But I had to leave them.  I could not take them here.”

Her husband and son stayed to guard the family home and Zalunts said that she was still prepared to return to Talish permanently, “if there will be a real truce”.

Fifteen-year-old Inna Bruzyan is also from Talish. Her father is still there, but she, her mother and four siblings all fled to Stepanakert.  The husband of an 18-year-old pregnant relative was killed within hours of hostilities breaking out, she said.

Bruzyan still does not understand how “people can kill one another,” she said, adding, “From our village, you can clearly see the roofs of houses of an Azerbaijani village and the trees that grow there.

“In the evenings, houses on both sides turn on their lights.  We have lived peacefully.  Sometimes, there was firing on the other side,” she told IWPR.

When the fighting began, Bruzyan said she realised that she was living in an illusion.

“The enemy, the elders had talked about, really exists and wants to kill me and my younger brothers and sisters,” Bruzyan said, adding that she no longer feels capable of making plans for the future.

“Not even for two or three years ahead.  The fear that I went through that night has destroyed my plans about the future,” she said.

Naira Avanesyan, a 35-year-old from the 800-strong village of Madaghis, had also sought refuge in Stepanakert.

Her husband is a soldier in the Karabakh army and was away on duty. She was alone with their three children. “Our block consists of young officers´ families, therefore we were all young women with small children. Suddenly, Grad rocket launches were being shot in our direction.  Everyone froze in surprise and fear.  And then we began to grab the children and run to the shelter. That night, when everything subsided, the women and children were evacuated,” Avanesyan said.

She was ready to return to Madaghis as soon as her husband returned home, no matter the state of the village.

“The material damage is nothing compared to the loss of young lives,” she said. “In both countries, a new post-war generation has grown up which could probably find a common language, but [Azerbaijan´s President Ilham] Aliyev does not care.  He is even indifferent towards the feelings of mothers whose sons are at war.”

Peace talks have been held between the two sides since the 1994 ceasefire with the mediation of the OSCE Minsk Group, which includes Russia, France and the United States, but a treaty has still not been reached.  Internationally referred to as a frozen conflict, the ceasefire agreement has frequently been violated.

The precise reason for the latest outbreak of violence remains unclear, with both sides blaming the other party.

Armenia´s ministry of defence announced that 65 soldiers and 11 civilians, including a 12-year-old boy, had been killed in Karabakh.

There were mass displays of solidarity and support for Karabakh self-determination, with rallies held in the capital Yerevan as well as diaspora events in London, Paris, Berlin, Athens and Los Angeles.

On April 10, thousands of people marched in silence in Yerevan to commemorate those who had died in Karabakh in the most recent fighting.

“My nephew was only 23 years old.  He had everything still ahead of him.  All his dreams remained unfulfilled,“ said Mansur Rahimov, the uncle of Orkhan Rahimov who died on April 2 after a missile hit his car.

“There is one consolation – we took several hilltops. We are tired of living in a situation of neither peace nor war.  Let it all be over, [let the Armenians] return our lands and there will finally be peace,” he continued.

After the fighting erupted, thousands of mostly young Azerbaijanis gathered in the streets of Baku and cities around the country to show their support for the military.  On April 6, the day after the truce was signed, over 6,000 people participated in a march along the Alley of Martyrs in Baku, where those killed in the Karabakh war are buried.

There is a wide agreement in Azerbaijani society that what they refer to as occupied territories needs to be returned.

Although some have accused their government of causing senseless suffering, others argue that Azerbaijan’s military efforts did not go far enough.

“I do not understand why we have declared a truce,” said 25-year-old Latif Feyziyev, who took part in one of the Baku rallies and said he looked forward to being called up in any future confrontation.

“After all, we had already managed to free some of the territory.  We should have gone until the end.  How else can we liberate our land?  We have been waiting for more than 20 years.  The Armenians do not want to let go of the occupied territory.   So, we either have to give up Karabakh or free it by force.”

For some displaced Azerbaijanis, the recent violence has renewed hopes of seeing their former homes again.

“In the morning of April 2, when I learned that there was again firing on the front line, and this time on a larger scale, I was scared,” said 29-year-old Ramiyya Malikova, whose family had to flee the Karabakh city of Shusha when she was five.  “But when the news came that we were freeing the territory, I became really excited. I thought, has the time really come, and I can see my hometown?”

Malikova has lived in dormitory accommodation on the outskirts of the capital Baku for 24 years, ever since her family was displaced.

“Since then, I have often dreamed about our house and the doll on my bed, which I could not take with me,” she said.  “I very much want to go back there.”