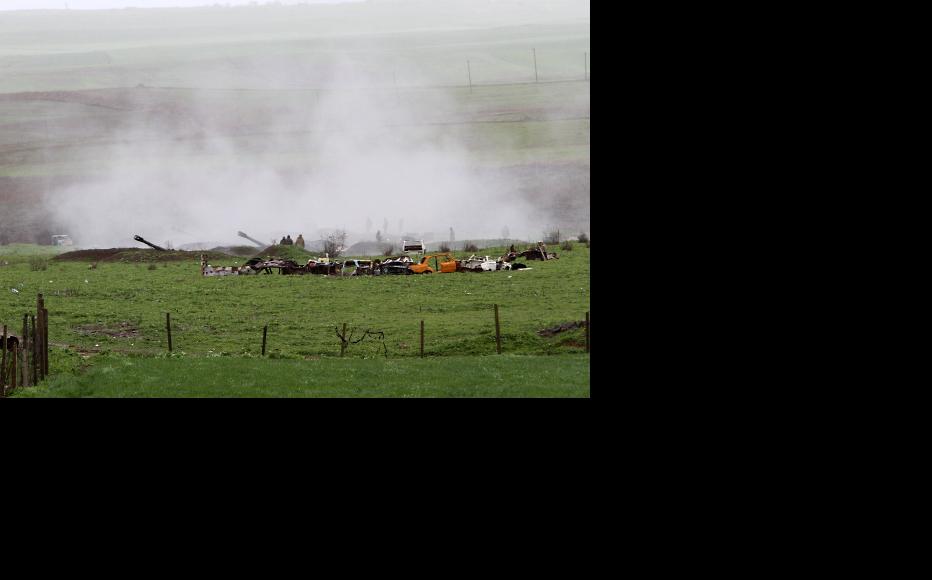 Heavy fighting between the armies of Nagorny Karabakh and Azerbaijan on the frontline, April 3, 2016. (Photo: Photolure Agency)
The link has been copied

As international negotiators meet for ceasefire talks following the worst violence around Nagorny Karabakh for decades, experts on both sides have been trying to puzzle out the reasons for the escalation.

Intense fighting erupted in the early morning hours of April 2 between Azerbaijani and Armenian-backed forces in the border regions of Nagorny Karabakh.

It remains unclear as to just what has sparked this latest outbreak of hostilities.  Both sides accuse the other and claim to have inflicted heavy losses on their adversaries.

Azerbaijan has confirmed the deaths of 15 soldiers and Nagorny Karabakh of 20 of its troops.  There have also been several civilian deaths and dozens of injured on both sides.

Within hours of the fighting beginning, the press secretary of Armenia´s ministry of defence, Artsrun Hovhannisyan, wrote on Facebook that “the enemy has started a clear offensive”.

In turn, Azerbaijan´s ministry of defence said that their positions had been assaulted with heavy machine gunfire, mortars, rocket-propelled grenades and artillery.  Settlements near the line of contact had also been bombarded.

“The leadership of the Armed Forces of Azerbaijan, assessing the operational situation, made the decision to take urgent response measures,” Azerbaijan´s defence ministry said.

Armenian media reported that in the morning of April 2, Azerbaijani troops fired surface-to-surface missiles in the direction of the Armenian settlement of Martuni.  A 12-year-old boy, Vaghinak Grigoryan, was killed and two other children injured.

Karabakh´s ministry of health said that there were five more wounded civilians in villages near the border.  One of the wounded was the head of the village of Madaghis in the Martakert region, Zaven Hovhannisyan.

Azerbaijan reported that its front line settlements had also been shelled. Orkhan Rahimov, a 23-year-old from the village of Garagaji in the Terter district, was riding in a car with his father when it was hit by a missile.  He was killed and his father and a bystander were injured.

War in the early 1990s left a local Armenian administration in control of Nagorny Karabakh, a territory of about 150,000 people, as well as several adjoining districts of Azerbaiijan. The fragile ceasefire signed in 1994 has been frequently breached by bouts of shooting across the “line of control” surrounding the Karabakh zone and across the Azerbaijani-Armenian state border.

The Minsk Group, the tripartite body set up by the OSCE to support peace talks on Karabakh, expressed “grave concern”. Mediators from Russia, the US and France met in Vienna on April 5 under the auspices of the OSCE to attempt to hammer out a fresh ceasefire.

A war of words has, inevitably, accompanied this week’s military escalation.

On April 4, Azerbaijan’s defence minister Zakir Hasanov warned that his army was ready to strike the Karabakh capital Stepanakert and other towns “if Armenian forces did not stop their military operations soon.”

On the same day, Sargsyan told ambassadors from OSCE member states visiting Armenia on April 4 that he was prepared to recognise Karabakh’s independence should armed hostilities continue and escalate.

Styopa Safaryan, head of the Armenian Institute of International and Security Affairs, said such recognition might prove a diplomatic game-changer.

“Formally, Russia and the CSTO are obliged to protect the security of its ally Armenia, but not the Nagorny Karabakh Republic.  However, the conclusion of such an agreement could serve as a legal foundation for the incorporation of Nagorny Karabakh,” Safaryan said.

On April 2, President Serzh Sargsyan of Armenia and his counterpart Ilham Aliyev of Azerbaijan met with their respective security councils.  They had only just returned from the Nuclear Security Summit in Washington.  Hostilities broke out while both were out of their countries.

Sargsyan said that “it is necessary to work towards the conclusion of a military assistance agreement with Nagorny Karabakh.  The Republic of Armenia completely fulfills its obligations in terms of safety for the population of Nagorny Karabakh.  We have a right to that, as we ourselves are a party to the ceasefire agreement concluded in 1994”.

Aliyev told his security council that “this is yet another armed diversion of Armenia against our country.  This is not the first time Armenia resorts to sabotage. … Today, the Azerbaijani army has given a worthy response to the Armenian sabotage.”

President Recep Tayyip Erdogan insisted that he would back Azerbaijan “to the end” and was also quoted as saying, “We pray our Azerbaijani brothers will prevail in these clashes.

Armenia is Russia´s traditional ally, but President Vladimir Putin for his part issued a measured response, calling for all sides to ensure “an immediate ceasefire and exercise of restraint,” according to his press secretary.

Nonetheless Azer Ismail, the deputy chairman of Azerbaijan´s opposition Musavat party, said that Russia was, as ever, controlling hostilities between the two sides.

“This time, everything has been so obvious,” Ismail said.  “All this happened after Ilham Aliyev released a number of political prisoners and went to the Nuclear Security Summit, where he met with [US secretary of state John] Kerry.  Before he managed to return, the war began.  Thus, Russia has made it clear to Azerbaijan that America is far away, but [Russia] is close,” he told IWPR.

Azad Isazade, an Azerbaijani military expert and former ministry of defence official, also thought that Russia may have been behind the escalation of the conflict.

“I think that Russia, by creating an uncertain situation, wants to dictate its terms to both sides.  But this is only a probability.  Time will tell what is what,” he told IWPR.

“Recent military actions may seem small. … But as a result of this, Azerbaijan can set its terms [as] ‘either talk to me or I will continue,” he said.

Renewed negotiations were inevitable, he continued.

“I think it is seasonal.  If we pay attention, the clashes on the front line mainly occur from March to May, because it is difficult to hold positions in winter due to the mountain terrain.  For that reason, the military forces of both sides take a step back in winter.  If the width of the neutral zone is 500 metres during normal times, in winter it increases to one kilometre.  In spring, the troops return to their positions and each wants to move forward. That is why the clashes start,” he said.

Vladimir Zainetdinov, spokesman for the Russian-led Collective Security Treaty Organisation (CSTO), of which Armenia is a member, blamed Baku for the fighting.

“Azerbaijani party´s actions in this case lead to an aggravation of the situation and the conflict,” he told the Russian news agency Interfax.

Matters should be resolved through negotiations, he added, and said that an “armed military solution to the Nagorny Karabakh conflict does not exist.”

Karabakh officials agreed that there was no way that the conflict could be resolved militarily.

Davit Babayan, press secretary of its president Bako Sahakyan, said the military action initiated by Azerbaijan was meaningless and had failed to give Baku even a tactical advantage.

“They themselves know this and are not taking any such military actions that can change the situation at the front,” he said. “Azerbaijan realizes that it cannot resolve the problem from a military point-of-view.  However, it stirs up tension in an attempt to put pressure on the international community.”

Some experts think that Azerbaijan´s deteriorating economic situation may have been a factor in the latest clashes.  For more than a decade, Azerbaijan has used its oil wealth to buy billions of dollars worth of military hardware, mostly from Russia.  A few years ago, Aliyev even declared that Azerbaijan´s annual military expenditure had surpassed Armenia´s entire state budget.

Armenia has also been buying weapons from Moscow, but to a much lesser extent.  Without oil resources and open access to international trade routes, due to closed borders with Turkey and Azerbaijan, Armenia´s economy is less developed.

However, the collapse in global oil prices and the drop of Azerbianjan’s manat currency by about one-third against the dollar have put Baku under pressure.

Aghasi Yenokyan, director of the Armenian Centre for Political and International Relations, argued that Azerbaijan had launched military action as a result of the low prices that were depriving Baku of its oil dollars. Even so, he said that the spike in violence was bound to subside.

“I do not think that we will have to deal with war, for two reasons: Armenia does not want war, and Azerbaijan does not have the resources to emerge as a winner,” he said. “ Secondly, both countries are quite vulnerable to political and economic pressure, and the international community does not need a war.”

Samira Ahmedbeyli is IWPR´s project director and editor for Azerbaijan and Armen Karapetyan is a freelance journalist in Armenia.