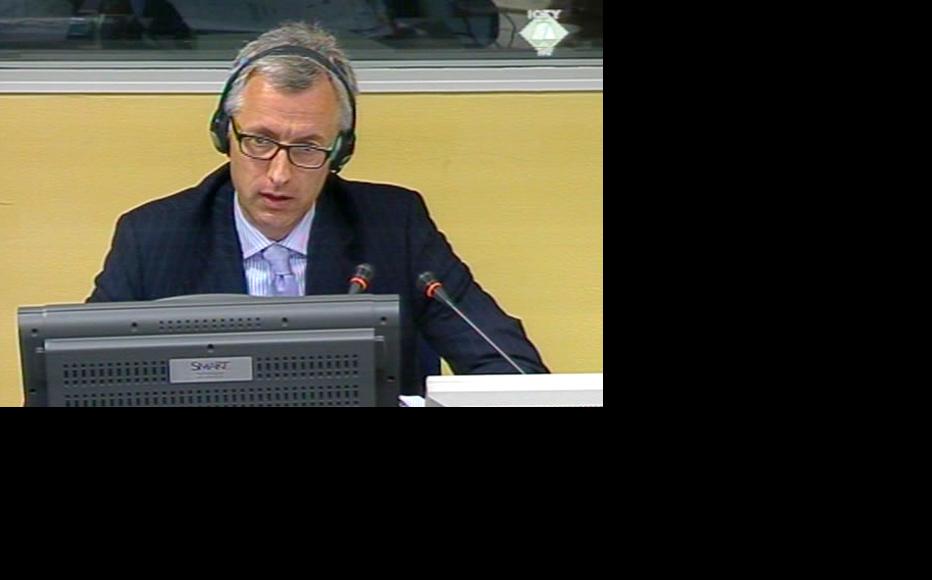 Reynaud Theunens, prosecution witness in the Mladic case. (Photo: ICTY)
The link has been copied

Laywers  for former Bosnian Serb army chief Ratko Mladic this week claimed that a military analyst testifying for the prosecution was not sufficiently qualified to give testimony in the trial.

The witness, Reynaud Theunens, told prosecutors last week that Mladic had “effective control” of his troops and “first-hand” familiarity with the situation on the ground. (See Mladic Had "Effective Control" of Troops.)

Theunens, who is from Belgium, has previously compiled numerous expert reports on military matters for the prosecution.

At the outset of the cross-examination this week, Mladic’s lawyer Dan Ivetic said that Theunens was “not sufficiently experienced as an expert to give an assessment of Mladic’s role as the commander of the Main Staff” of the Bosnian Serb army (VRS).

Theunens previously served in the Belgian armed forces, and Ivetic pointed to the witness’s “relatively low military rank of squad commander” which meant that he would only “command 80 people or less, but not an entire army”.

The witness responded by saying that he was “educated enough and experienced enough” to be able to give his own assessment of the situation, but that it was ultimately for the trial chamber to decide whether he was sufficiently qualified to be an expert witness.

Ivetic wanted to know whether Theunens was involved in drafting the indictment against Mladic. The witness said that he did have a number of meetings with the prosecution and advised them “regarding the choice of the military terminology to be used” in the document.

Theunen’s report said there were military courts which “could and should have been used to prosecute” crimes and other infractions committed by VRS members.

When Ivetic asked whether these courts were under Mladic’s control, the witness said that according to documents he had analysed, they were under the “command and control of the supreme commander of the VRS, President Radovan Karadzic”.

Karadzic is currently also standing trial at the tribunal.

Therefore, the witness said, although it was not in Mladic’s power to nominate and appoint military judges and prosecutors, he was responsible for “all military and paramilitary units fighting in the zone of his responsibility”.

The defence further claimed that Mladic could do nothing to stop the violence carried out by the paramilitary unit of Zeljko Raznatovic, known as Arkan, in 1992, but had done “all that he could: ask President Karadzic and the Bosnian Serb police to do something about this problem”.

Theunens disagreed, and said this was definitely not “all he could have done”.

“By failing to undertake the appropriate measures [to deal with] these crimes, Mladic himself was involved in them,” Theunens continued.

To counter this claim, the defence lawyer presented an order dated July 1992 in which Mladic “demanded strictly that any paramilitary personnel who commit crimes be disarmed, arrested and their acts put on trial”.

Theunens answered by saying that while he did not dispute the document’s authenticity, it was the next step – “the implementation of the order” – that almost never took place. This effectively turned the order into the “embodiment of dead words on paper”, and was typical of “the only theoretical good intentions” of Mladic.

Ivetic also pointed out that there had been a “serious personnel problem with the VRS”.

Theunens said that while there probably were certain issues with the number of qualified officers available, “there were enough to establish a properly functioning military command and control structure”.

In addition, the defence claimed that Karadzic, as supreme commander, was trying to directly take control of VRS units, thereby “bypassing Mr Mladic and undermining his authority as direct military commander”.

The witness said that while the conflict between the two men might have been overt at certain times, it would be going “too far” to say that there was proof of Karadzic actually undermining Mladic’s authority.

“I do not remember having seen a single document ever in which General Mladic complained that he was being hindered or effectively prevented from running the VRS in a proper and efficient way,” Theunens said. “While he did suspect that there were points in which his authority may have been undermined… there was no proof that these suspicions were correct [or that they] would have led to any sanction of any kind.”

Theunens was the final witness to testify on behalf of the prosecution. The defence case will not commence until spring next year.