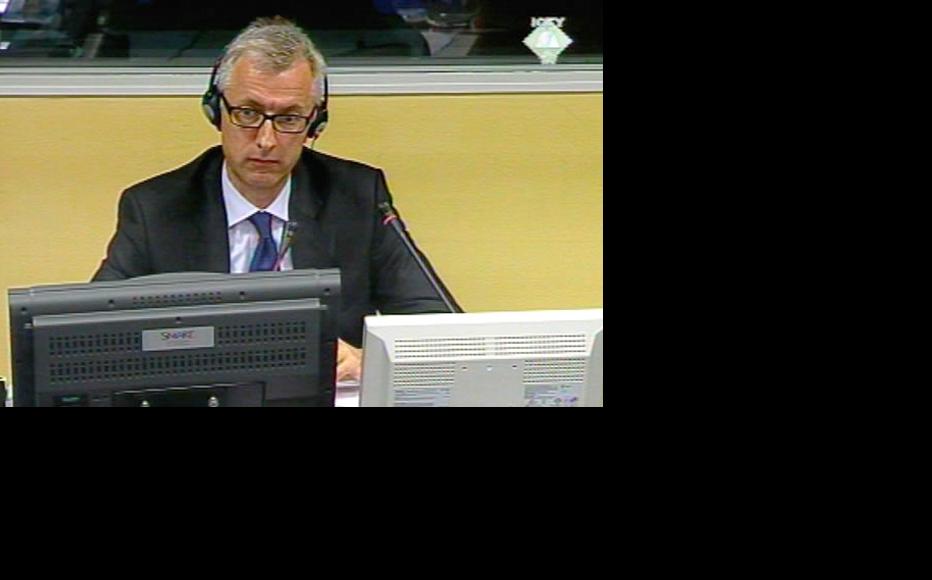 Reynaud Theunens, prosecution witness in the Mladic case. (Photo: ICTY)
The link has been copied

A military analyst testifying at the trial of wartime Bosnian Serb army chief Ratko Mladic told the Hague tribunal this week that the defendant had “effective control” over military operations on the ground.

Reynaud Theunens, a military intelligence analyst from Belgium, was the last witness to appear in the prosecution case against Mladic. The defence is expected to start presenting its case in May 2014.

Prosecutors allege that Mladic, as commander of the Bosnian Serb army (VRS) from 1992 to 1996, is responsible for crimes of genocide, persecution, extermination, murder and forcible transfer which “contributed to achieving the objective of the permanent removal of Bosnian Muslims and Bosnian Croats from Bosnian Serb-claimed territory”.

He is also accused of planning and overseeing the 44-month siege of Sarajevo that left nearly 12,000 people dead, as well as the massacre of more than 7,000 men and boys at Srebrenica in July 1995. Mladic was arrested in Serbia in May 2011 after 16 years on the run.

Theunens used to work for the tribunal’s Office of the Prosecutor (OTP) and has appeared in eight other trials so far, including the trial of former Bosnian Serb president Radovan Karadzic.

He wrote an expert report in 2012 in which he analysed Mladic’s role as VRS chief. The document was admitted into evidence this week.

In the report, the witness said that “documents from the early stage [of the Bosnian war], before May 12, 1992, were only scarcely available”.

However, he noted that the documents he did see demonstrated Mladic played an instrumental role during the war and that his involvement was crucial to the “activities of the units on the ground”.

According to Theunens, the date May 12, 1992 was important because “the strategic goals of the Serb people” – which were adopted that day at a session of the Bosnian Serb parliament – “proved to be a key guideline in the work and activities of the operations of the VRS from the outset [of the war] all the way until the end of the conflict”.

The witness noted that these strategic goals included the separation of Serbs from the country’s other ethnic groups, the division of the capital Sarajevo, and well as the establishment of the borders of “a Serb people’s territory” between the Drina, Una and Neretva rivers. The Drina river would no longer form a border between the Serb part of Bosnia and neighbouring Serbia, he added.

“The first strategic goal [the separation of the Serb ethnic group] was indeed very important – more important than the others,” Theunens told the judges, adding that “it carried more specific mission weight in relation to the other five, which basically provided a geographic framework for the Serb people”.

The witness pointed out that many other measures, including “those that General Mladic personally wrote down in his diary”, could easily be connected to the affirmation of the strategic goals.

“For example, the accused makes an entry in his diary that mentions Mr Karadzic saying that the town of Bratunac has been freed, and that Zvornik would be next,” Theunens said, referring to towns on Bosnia’s eastern border with Serbia.

“Freeing [these towns] clearly indicates the striving to achieve the strategic goal of removing the border between the Serbs in Bosnia and the Serbs in Serbia, located on the Drina river,” he said.

The witnesses said that both Zvornik and Bratunac had large Bosniak communities at the beginning of the war, but their numbers were suddenly and significantly reduced as a result of numerous crimes committed in that area.

Theunens told the judges that from the documents he analysed for the expert report, he got the impression that Mladic was an adroit and well-informed commander.

“It can be said that Mladic spent a lot of time in the field and was therefore de facto in charge of military operations on the ground,” he said. “Mladic also seemed very willing to intervene whenever it seemed necessary.”.

For example, at the beginning of the war Mladic issued a directive “in his capacity as the then-acting commander of the VRS main staff”, requesting that units of the Yugoslav People’s Army (JNA) which were then withdrawing from Bosnia “leave their weapons behind, and that any soldiers of the JNA who were originally from Bosnia and Herzegovina should join the VRS”.

According to the witness, Mladic also asked for regular reports from the JNA “in order to be informed about the situation on the ground”.

“Therefore, it is quite clear that Mr Mladic had effective control concentrated in his person,” Theunens concluded.

His testimony will continue next week.