People worry that a gun attack on the US embassy will further destabilise the divided country and do serious damage to its international reputation.

People worry that a gun attack on the US embassy will further destabilise the divided country and do serious damage to its international reputation. 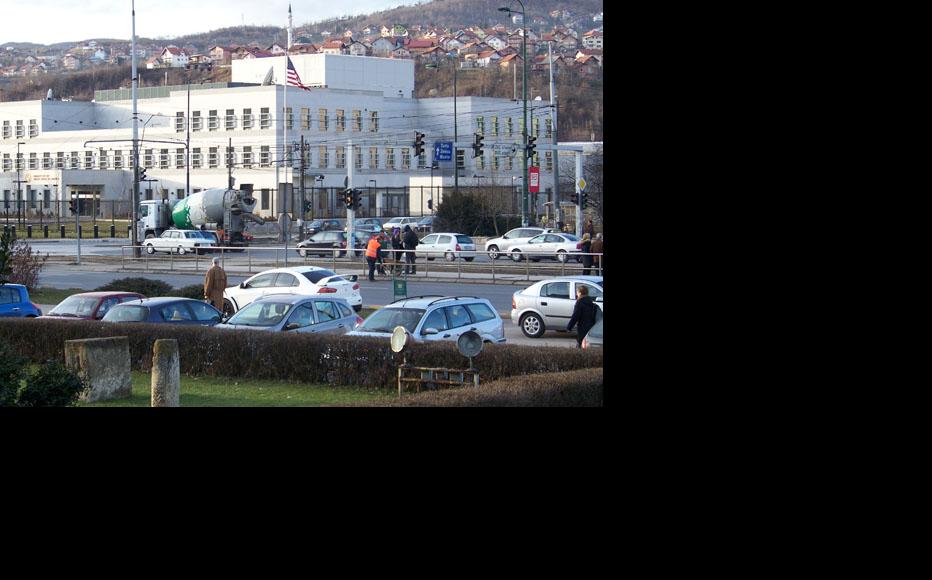 The US embassy in Sarajevo. Photo:Merdijana Sadovic
The link has been copied

When news spread about an extremist attack on the American embassy in Sarajevo last week, Bosnians throughout the country froze in complete shock. This was the first attack on any embassy or international organisation in Bosnia-Hercegovina, BiH, since the 1992-95 war – and one which could irreversibly damage its reputation as a country in which foreigners could feel safe.

Around 3.30 pm on October 28, a lone gunman opened fire at the embassy in downtown Sarajevo, wounding a policeman guarding the facility. Video footage made at the scene showed a bearded man carrying a Kalashnikov who roamed a deserted intersection, waving his gun and occasionally shooting at the fence and facade of the embassy building.

After a 30-minute standoff, a police sniper immobilised the assailant with a shot to his leg. The assailant was then taken to a hospital, where he is currently being treated for his wounds. He will be held in custody while an investigation gets underway. Luckily, no-one was killed in the incident.

The assailant, named as Mevlid Jasarevic – a 23-year-old Muslim from the city of Novi Pazar in Serbia's Sandzak region – reportedly had two hand-grenades on him, but no explosives. It is still not clear whether he acted alone and what his goal was.

The new US embassy building, opened in October last year, is the eighth largest in Europe. It is surrounded by a thick wall and practically impenetrable from the street.

According to the Bosnian authorities, Jasarevic was known to intelligence services in Serbia and Bosnia. He is a member of the Islamic fundamentalist Wahhabi sect and has relatives in Bosnia, whom he visited regularly. He was also detained briefly in Novi Pazar last year during the visit of several dignitaries – including one from the US – to the city's municipal building. He did not attack anyone at the time, but the Serbian police, who arrested Jasarevic and a group of other Muslims protesting in front of the building, found that he was carrying a large knife.

Last week's attack in Sarajevo puzzled many observers because it didn't seem to fit the profile of similar attacks carried out around the world.

During the 30-minute standoff, Jasarevic fired more than 100 bullets, but didn't aim at any of the civilians who were close to the embassy at the time of the attack. Also, he reportedly yelled at other guards to “move away”, because he didn't want to “shoot at [his] Muslim brothers”. He also appeared to be very calm in a video footage of the incident.

The police later told the reporters that it took them more than 30 minutes to hit Jasarevic because they were afraid he was strapped with explosives or had accomplices nearby. None of that appeared to be true.

Jasarevic’s lawyers told the Bosnian media on October 30 that their client will need “psychiatric evaluation”, because he didn't seem to be fully aware of his acts.

As soon as Jasarevic was shot, Bosnians sighed with relief, but speculation immediately began about what impact this incident will have on Bosnia's future.

“This was not just an attack on the US embassy and the United States, but also an attack on Bosnia-Hercegovina," said Croat member of the Bosnian state presidency and its current chairman, Zeljko Komsic, at a joint press conference held at the presidency building in Sarajevo on October 28.

"The American government and people have supported us in the most difficult moments of our history, and nobody has the right to endanger the friendly relations between our two countries," said Bakir Izebegovic, a Bosniak member of the presidency.

Although BiH officials didn’t speak publicly about the possible implications of the incident on Bosnia’s international image, ordinary people did.

“The main problem is that people around the world will now start seeing Bosnia as a terrorist state,” Jasmin Hodjic, a student from Sarajevo who witnessed the incident, told Sarajevo daily Avaz shortly after the attack.

“I wasn’t afraid. After all, I survived the war. But I do fear the consequences of this attack and the negative image it will bring to Bosnia,” Avaz reported another eyewitness, Jasmin Pita, as saying.

These words reflected fears of most citizens of BiH, a country which is currently undergoing the most serious political crisis since the end of the war. A whole year after general elections were held, the country still doesn’t have a new government due to disputes among the parties who won majority of the electoral vote.

Until the deadlock is resolved, Bosnia won’t be able to take any serious steps towards joining the European Union. It’s already lagging behind its neighbours - particularly Croatia, Serbia and Montenegro - and EU officials have started to openly express fatigue at the lack of any visible progress in implementing the reforms the country needs to become a member state.

Just before the attack, which sent shock waves through BiH and threatened to destabilise it further, EU officials warned that the current situation in the country is extremely complicated and that the international community can do very little – if anything – to force BiH leaders to move forward.

They also pointed out that Bosnia's hopes of being automatically accepted into the EU once neighbouring countries join are unrealistic.

Bosnian analysts claim that last week’s incident might play out well for Bosnian Serb politicians, led by the president of Republika Srpska, RS, Milorad Dodik, who do not hide their secessionist ambitions. They could say it was yet more proof that BiH as a unified state cannot work.

At a press conference held on October 29, Dodik told reporters that the attack was a result of the “current atmosphere in the [Bosniak-Croat] Federation”, implying that the authorities in this entity have not done enough to prevent radical Islam from spreading in Bosnia.

Jasarevic is believed to be a follower of Wahhabism, a very conservative branch of Islam that is rooted in Saudi Arabia and linked to religious militants in parts of Afghanistan and Pakistan. He has relatives in the northern Bosnian village of Gornja Maoca, known to be inhabited by many Wahhabis. Police raided Gornja Maoca in February 2010 because its residents were accused of posing a security threat in Bosnia by promoting racial and religious hatred and possessing illegal weapons.

“[The investigation into] this terrorist attack will reveal a lot of things,” Dodik told the press conference, without going into details.

Predrag Ceranic, professor at the faculty for security and protection at Banja Luka university, said the incident has already greatly affected Bosnia's international reputation because it places it in the same groups of countries in which attacks against US embassies have taken place.

"In addition to being very damaging for Bosnia, this incident will create fear among its population. If Wahabbi followers dare shoot at the US embassy in Sarajevo, what can the RS institutions and its citizens expect?” he told Banja Luka daily Nezavisne Novine.

Shortly after the attack, US ambassador to Bosnia Patrick Moon told reporters that "this is a regrettable incident", and that his country has full confidence in Bosnian police and judicial authorities. He also pledged "full cooperation" in the investigation.

Sarajevo-based expert on terrorism and professor at the faculty of political sciences, Vlado Azinovic, suggests that the attack will not drastically change the overall security situation in Bosnia for the US and Bosnian citizens.

“However, I am sure that it will be used by the local politicians for their own political goals. Many of them will jump at the opportunity to use this attack as some sort of a moral and political excuse for promoting the dissolution of Bosnia as a state, arguing that they cannot stay in a country in which such terrorist attacks are possible,” Azinovic said.

He emphasised that the incident also highlighted the weaknesses of Bosnia's intelligence and security agencies.

“These problems are a result of a non-functional state and the fact that those holding the highest positions in security and intelligence agencies are not the most capable individuals, but those who will serve political elites best,“ he said.

Although information about the assailant and motives are still thin on the ground, analysts agree that it's crucial for the state authorities to act swiftly and do everything they can to prevent similar attacks from happening in the future.

“It is necessary to conduct a very precise, intelligent and deep investigation into this incident,” said Bosnian academic Muhamed Filipovic’s in the interview for Avaz daily this week. “Massive repression [and persecution of Wahabbi followers] would not help. On the contrary, it would only prove to those behind this attack that violence is the only thing in Bosnia which reaps results.”

Merdijana Sadovic is the IWPR’s Hague tribunal manager in Sarajevo.