Calls for an end to poor government, corruption and illegal privatisation as popular unrest continues.

Calls for an end to poor government, corruption and illegal privatisation as popular unrest continues. 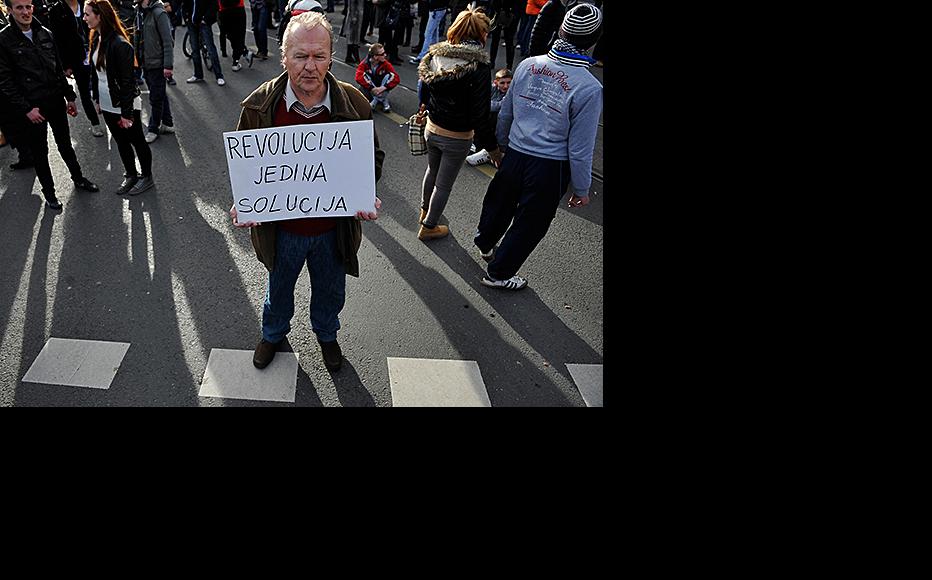 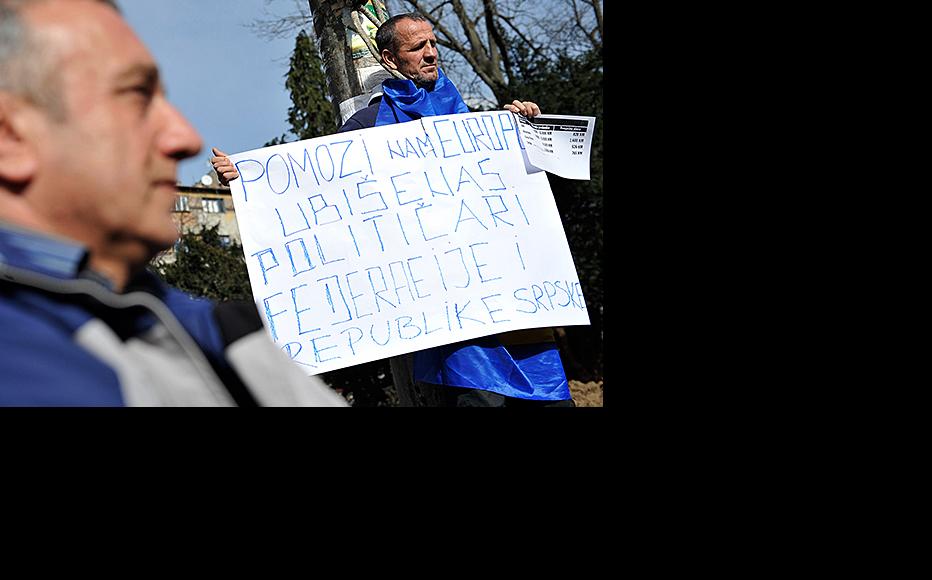 A protester stages a mock hanging, holding a banner saying, "Help us, Europe. The politicians in the Federation and Republika Srpska are killing us." February 17. (Photo: Midhat Poturovic) This banner calls for the names of billionaires - those who benefited from the privatisation process in Bosnia.(Photo: Midhat Poturovic)
The link has been copied

As protests continue in cities around Bosnia, citizens’ meetings have been held to call on the government to tackle unemployment and corruption.

Demonstrations which began in Tuzla on February 4 and quickly spread to several other cities resulted in the worst violence the country has seen since the end of the 1992-95 war. Some 300 people were injured and around 100 detained in the rioting. Seventeen buildings housing Bosnian local and state institutions, including the presidency, were badly damaged. (See Could Sarajevo Protests Herald "Bosnian Spring"?.)

Although daily protests have continued since then outside government institutions in Sarajevo, Mostar, Tuzla, Zenica and other urban centres in the Federation, they have been peaceful.

The Federation is the larger of Bosnia’s two administrative entities and is populated mainly by Bosniaks and Croats. The other entity created by the 1995 Dayton Peace Agreement which ended the war is the Serb-majority Republika Srpska (RS), which has largely escaped the protests.

Protests have already resulted in the fall of four cantonal governments in Tuzla, Una-Sana, Sarajevo and Zenica-Doboj.

“Citizens’ plenums” set up in more than a dozen towns in the Federation, have already succeeded in getting some of their demands met.

In Tuzla, the cantonal assembly agreed to abolish the “white bread” benefit which allowed canton-level ministers to continue receiving their full salaries for up to 12 months after their terms had ended.

“Today, with just one show of hands at the cantonal assembly in Tuzla, we have saved around one million convertible marks [about 700,000 US dollars] in a mere ten minutes. That’s 130 pensions for a whole year,” said Damir Arsenijevic, an academic and one of the representatives of the Tuzla citizens’ plenum. “It’s not true that the complex structure of our governments on all levels is the problem. The problem is the arrogance and indolence of those who govern this country.”

Similar demands have been formulated by other citizens’ plenums. There are demands for more competent government, cuts in officials’ salaries, and revisions to the privatisation process that came after the end of communism and the war in Bosnia. Privatisation produced a handful of tycoons but almost wiped out the middle class and drove the working class into poverty.

In response, the Federation government has vowed to become more active in addressing workers’ problems and investigating fraudulent privatisations. Officials have also promised that prosecutors will charge those who took part in illegal privatisations.

Although the protestors also demanding the resignation of the entire Federation government, it is unlikely that elections will be brought forward from the current scheduled date in October. The Bosnian constitution does not make provision for this, and the High Representative, Valentin Inzko – who heads the international body established to oversee implementation of the Dayton accord – has refused to intervene and impose an earlier vote.

RS president Milorad Dodik has claimed that the protests were fuelled by outside actors including the European Union, and that they were only a “problem for the Federation”, since there were no social problems in his own entity.

Opposition figures in RS disagree. Mladen Ivanic, the head of the Party of Democratic Progress, said it was only a matter of time before anti-government protests spread to RS as well.

“Bosnian Serbs will participate in protests not because someone tells them to, but because they’re hungry and unemployed and the RS government is doing nothing to solve their problems,” he said.

Commentators are trying to figure out what should happen next in Bosnia.

“The next step should be a change of environment in Bosnia and Herzegovina, encompassing changes to the economic and political systems and to the social position of citizens,” Sarajevo-based sociologist Salih Foco said. “The voices of the people participating in these changes must finally be heard, and the non-government sector should be involved as well.”

Suad Kurtcehajic, a professor in the politics faculty at Sarajevo university, agreed that the whole political culture needed to change.

“We first have to establish a body to fight corruption, and then we can start the process of identifying illegally acquired property. Only after we create a system for dealing with the big fish and putting them behind bars will there be any sense of satisfaction among ordinary people,” he said.

International diplomats, including EU officials, flocked to Sarajevo in the days following the violence to send a clear message that violence would not solve Bosnia’s problems.

They called on Bosnian politicians to act responsibly and not use the current situation to score points before the October elections.

“This is not the time for confrontations between political parties. Crucial issues are in focus here – the functionality of the country and wellbeing of its citizens,” said the EU commissioner’s for enlargement, Stefan Füle, who arrived in Sarajevo on February 17 for a two-day visit.

Shortly after the unrest began, she said that the Bosnian leadership should not ignore popular dissatisfaction and called on it to take this opportunity to address economic and political problems left to fester for many years.

Ashton said this was a historic chance for Bosnian citizens to improve their situation with the help of the international community, primarily Europe.

Balkans, Bosnia and Herzegovina
Protests
Connect with us