Officials in Ghazni say members of security forces are handing military equipment to the enemy.

Officials in Ghazni say members of security forces are handing military equipment to the enemy. 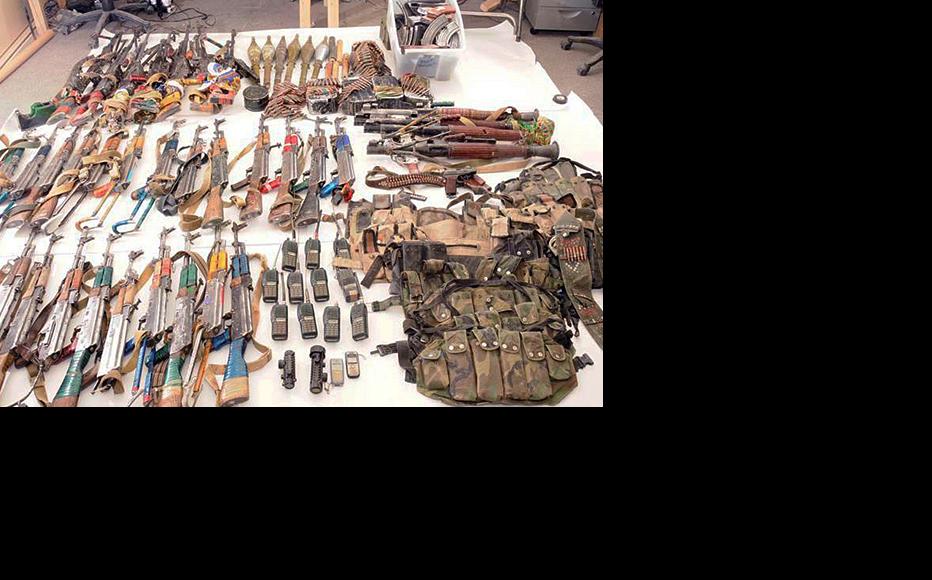 A selection of insurgent weapons seized by Australian troops in Kandahar, June 2010. (Photo: ISAF Public Affairs)
The link has been copied

Officials and elected councillors in Afghanistan’s Ghazni province have raised the alarm about illicit arms deliveries to the Taleban. Police, they say, are happily trading away their ammunition to the insurgents they are supposed to be shooting at.

"On the basis of evidence in our possession, we can absolutely confirm this,” Mohammad Ali Ahmadi, the deputy governor of this southeastern province, told IWPR. “Unfortunately, a proportion of the weapons and equipment assigned to our national army, police and security agency are now in the hands of our opponents."

Because Ghazni, located south of the capital Kabul, is regarded as a high-risk province with Taleban units operating in many areas, government security forces deployed there are issued with extra ammunition.But these supplies are changing hands, either in straight business transactions, as “tribute” – in other words as a form of protection racket – or as a result of Taleban infiltration of the security forces.

Ahmadi noted that in one district, Andar, the police were unable to account for 60,000 rounds of various calibres – lost within a short space of time –  without apparently firing them at anyone in anger.

"It isn’t just bullets and military equipment that are being handed to our opponents in some districts, but also assorted vehicles including cars, generators and solar [panel] systems that are going to the Taleban," he added.

Hamidullah Nawrozi, a member of the provincial council, told IWPR that credible reports of arms sales had come “from different sources, on several occasions”.

“These reports indicate that it’s the police who sell the most weapons to government’s armed opponents,” Nawrozi said. "We conducted an investigation in one district of Ghazni which I don’t want to name. When the weapons inventory was assessed, it came up short of 8,000 Kalashnikov rounds, without there having been any clashes in that area.

“We asked them to explain the shortfall, but they were unable to respond as to where these bullets had gone. That indicates that they’d either sold them or given them in tribute to the Taleban."

Khalil Hotak, a coordinator with the Afghan Local Police, said the illicit trade was worse in the Andar, Aband, Qarabagh and Gelan districts of Ghazni.

Hotak described one novel way of transferring ammunition which avoided the need for direct contact.

"We have evidence that during the night, the Taleban cut loose a trained donkey which then heads for a checkpoint. The donkey stops there, the police bring out ammunition cases and load them onto the donkey, and it returns the way it came, and taking them to the Taleban," he said.

Gholam Mohaiuddin Sarwari, police chief for Ghazni province, said he had been informed that munitions were being sold to insurgents, but there was no documentary proof.

“We are considering some measures to prevent future sales of ammunition to our opponents,” he added.

Colonel Muhammad Hanif, the chief military prosecutor in Ghazni province, said his office was not only aware of the problem, but feared that that the number servicemen handing their weapons and ammunition to the Taleban – for whatever reason – was now on the increase.

Hanif said his office had three investigations in train concerning Afghan Local Police in the Deh Yak district. Police there are accused of giving the Taleban their weapons and ammunition, and ceding control of a checkpoint.

Another provincial councillor, Hamidullah Danesh, worries that the ease with which the Taleban get hold of ammunition reflects a broad network of contacts, sympathisers and agents within Afghan state institutions.

"The opponents of the government carry through their schemes by exploiting their influence within government. The arms trade is organised in the same manner. There are individuals within the government armed forces who provide contacts between them and the armed opponents," he said.

Danesh said the Afghan intelligence service as well as the courts needed to clamp down on such offenders, in order to prevent a repeat of what happened at the outset of civil war in 1992, when the government armed forces fragmented and their weapons were carted off by various factions.

Similar stories are heard elsewhere, too. In Nangarhar province, south of Ghazni towards the Pakistan border, there are reports of a thriving trade between the opposing sides.

Borhan, a resident of Nangarhar’s Sorkhrud district, said arms trafficking was better business than opium these days. "A relative of mine who’s a policeman does nothing else,” he said.

"There’s a village in our area called Qala-ye Sayed Sadeq. Weapons are traded there on a regular basis,” Borhan told IWPR. “The police send weapons and bullets there via arms smugglers. The Taleban come at night in their cars and buy weapons there and take them away,” he said. “The district [government] office is aware of it, but it hasn’t taken any action."

Sayed Rahmatullah Alizada is an IWPR-trained reporter in Ghazni province.

(This is a longer version of a radio story first published here.)