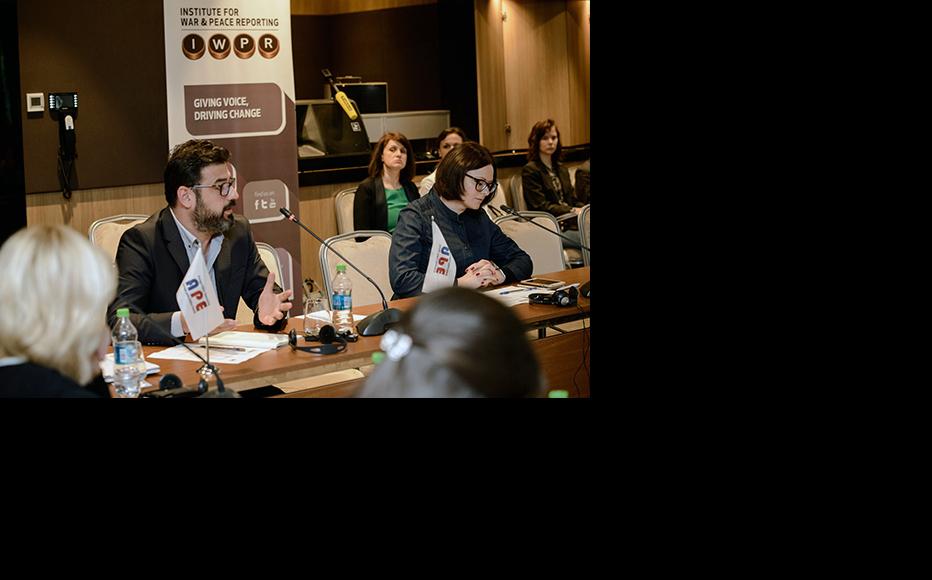 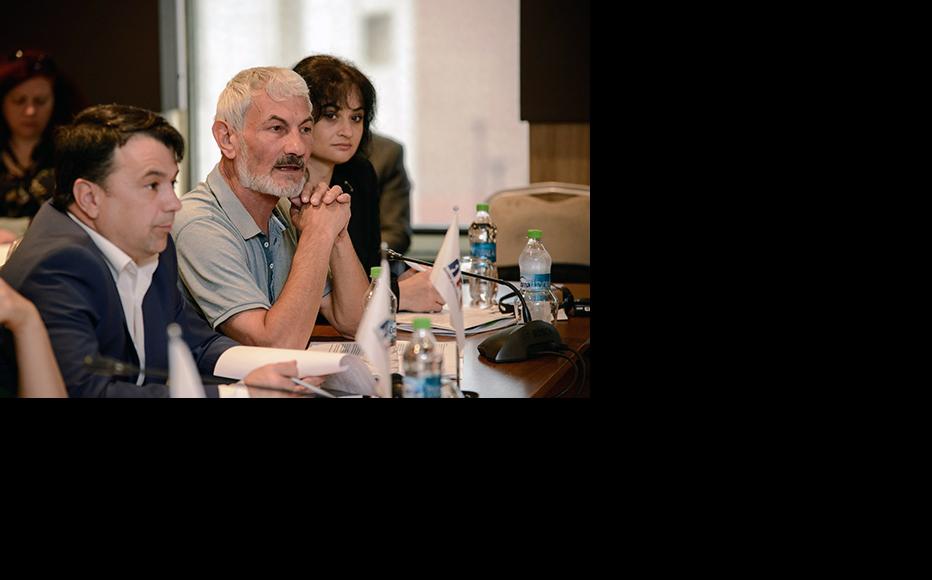 Ion Bunduchi, Executive Director of the Association of Electronic Press and Rosian Vasiloi, Security Expert at the Institute for Development and Social Initiatives in Moldova as keynote speakers on practical implications of disinformation, the legal instruments and capabilities to ensure adequate responses. (Photo: IWPR) 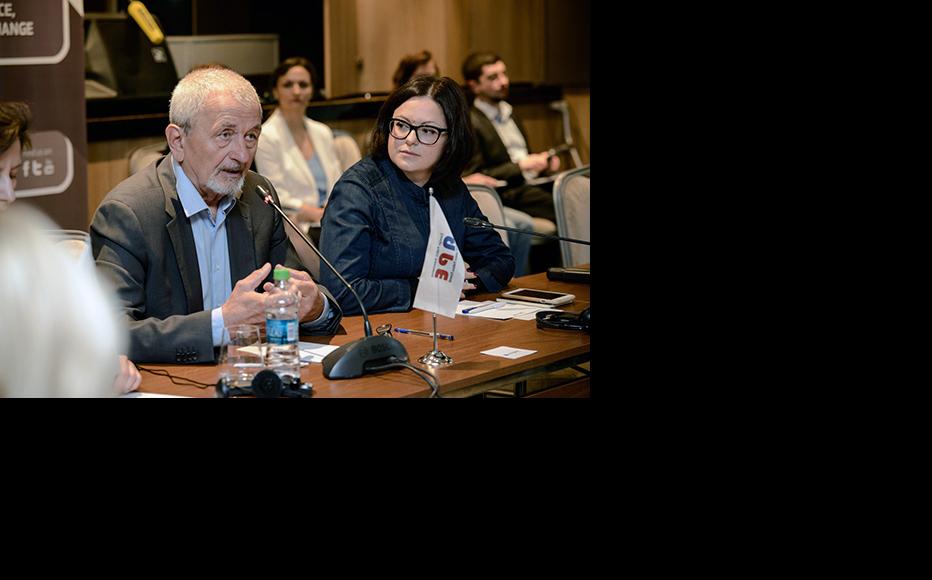 Arcadie Barbarosie, Executive Director of Institute for Public Policy delivering speech in the panel on hybrid threats phenomenon in the Republic of Moldova: challenges and resilience capacities. (Photo: IWPR) 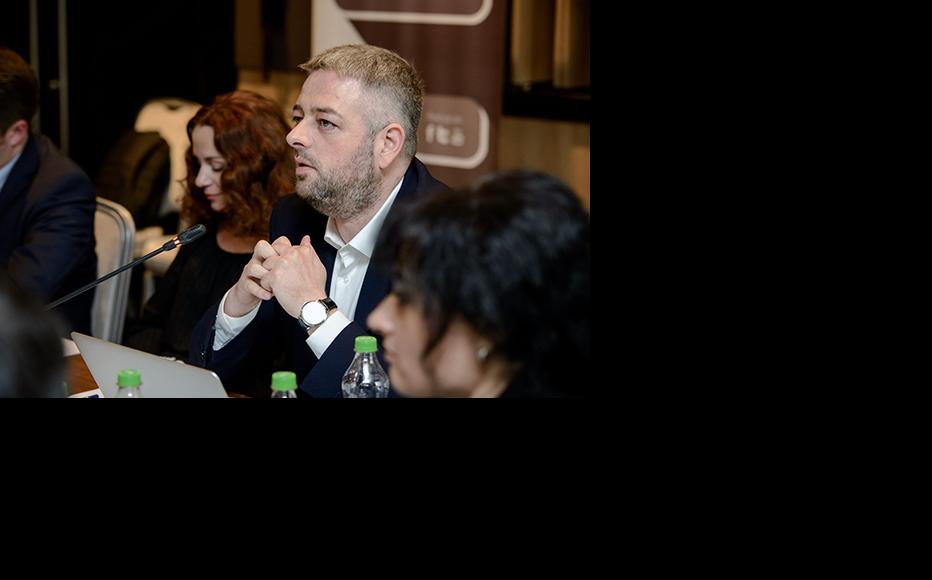 Dumitru Tira, Executive Director at The Institute for the Prevention of Hybrid Threats is discussing the ways to fighting propaganda and fake news in the context of Moldova and wider eastern EU’s eastern partnership region. (Photo: IWPR) 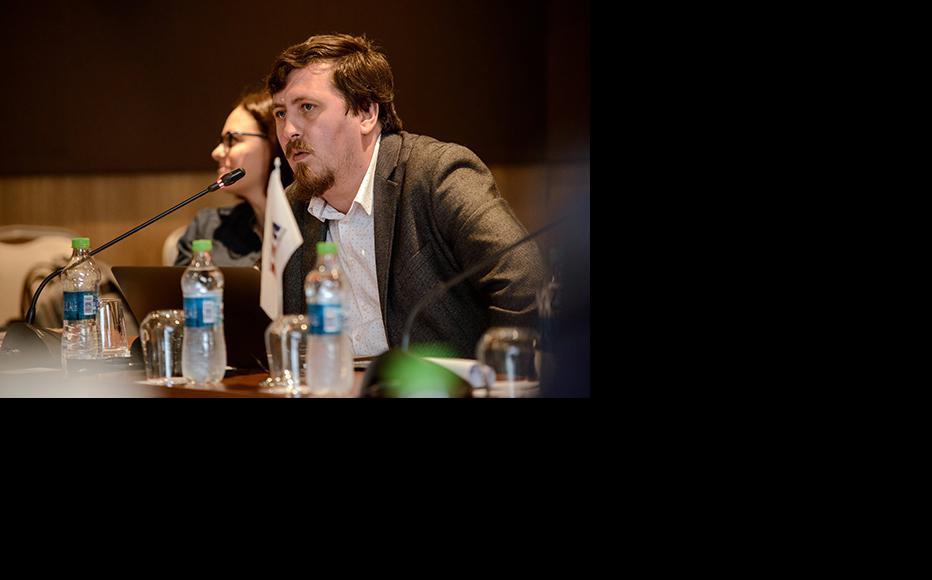 Moldova needs to urgently build its resilience to a new era of hybrid threats, according to a public  discussion organised by IWPR and the country’s Foreign Policy Association.

Hybrid threats can range from cyber attacks on critical infrastructure to diplomatic pressure, economic sanctions and the spread of fake news.

The event heard that social media disinformation campaigns were a particularly potent threat in Moldova and other post-Soviet countries.

For instance, during the Moldovan parliamentary elections in February, Facebook cooperated with civil society organisations to shut down more than 100 accounts, dozens of pages and eight Instagram feeds for coordinated inauthentic behavior.

Russian influence has also exploited weaknesses around the unresolved conflict in Transnistria and its Russian-speaking provinces, along with the autonomous region of Gagauzia.

Rosian Vasiloi, a security expert at the Institute for Development and Social Initiatives, said, “When we talk about hybrid dangers in the Republic of Moldova, we start with two important issues: the direct and continuous confrontation between the Russian Federation and the West - and we are part of this confrontation - and secondly, the obligation of the authorities and the state, to seek the necessary mechanisms to counteract these external pressures.”

“Moldova, Ukraine, our entire region is in an area of ​​geopolitical confrontation, and this confrontation itself is a source of instability,” added Tatiana Molcean, state secretary at the ministry of foreign affairs and European integration.

Participants at the May 30 event highlighted the lack of public awareness of the issue and the need to develop a common vision on how to combat hybrid threats.

“The event organised by IWPR was the first ever platform where stakeholders from all key government and non-governmental sectors came together to address the issue,” said Dumitru Tira, managing director of the Institute for the Prevention of Hybrid Threats.

In addition, Russian social networks Vkontakte and Odnoklassniki are used by many Moldovans.

“An effective tool in counteracting such tools as propaganda, fake news, misinformation, which are all elements of hybrid war, would be media literacy, which develops cognitive capacities and abilities that empower the company to effectively analyze the information,” said Tatiana Buraga, a member of the Audiovisual Council of the Republic of Moldova. “That is why it is very important to introduce this subject in all educational institutions, beginning with the pre-school stage, and using a language appropriate to each category.”

Ministry of defence representative Aurel Fondos explained that combatting hybrid threats was now part of their national strategy, including protecting critical infrastructure against sabotage and enhancing collaboration among key stakeholders.

“The principles of the development of the hybrid war do not represent the end of traditional or conventional war, but it is a factor that significantly complicates defence planning in the 21st century,” he continued. “Under the current security environment, driven by global resource crises, external climate change, economic migration, energy resource vulnerability, demographic growth and ideological extremism, hybrid threats are far more dangerous than all previous threats put together.”

Tira said that support for media was crucial.

“Also, parliament needs to adopt new legislation to fit the new information environment, including the threats, although considering the political situation in Moldova at the moment, this may be impossible in the foreseeable future,” he continued. “In addition, Moldova’s development partners should support media and civil society organisations that want to combat hybrid threats.”

The event was covered by several local media outlets, including TVR Moldova, Realitatea.md and Moldova9.com.

Recommendations included the further development of a national strategy and better coordination among stakeholders. The need for efforts to increase media literacy were also emphasised.

Giving Voice, Driving Change - from the Borderland to the Steppes
Moldova
Social media, Media, Education
Connect with us