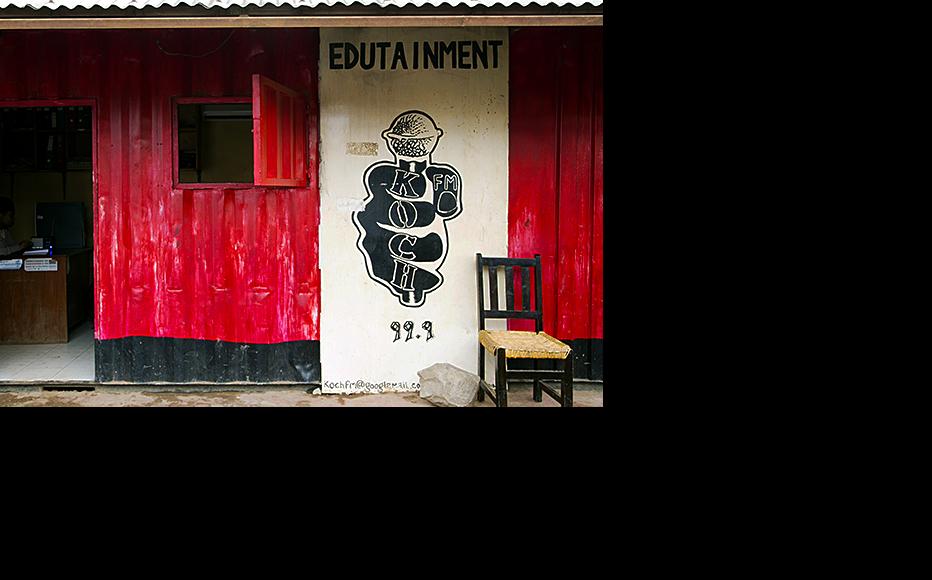 Koch FM in Nairobi's Korogocho slum tackled the issue of rape and the many obstacles to justice. (Photo: Matthew Rhodes/IWPR)
The link has been copied

Kenyan human rights activists and residents of one of Nairobi’s largest slums have welcomed a recent IWPR radio debate that questioned why rape was so rarely reported to the police.

The studio discussion, which incorporated a live phone-in on one of IWPR’s partner stations, Koch FM, in Korogocho, a sprawling settlement on the northeastern edge of the capital, and home to some 150,000 people.

Listeners and participants said the September 12 programme made them more aware of gender-based violence and of the many hurdles facing victims seeking justice.

“It was a great opportunity to share and hear the challenges rape survivors go through,” Rose Syombua, a gender activist in Korogocho who took part in the debate, said afterwards. “We require more platforms [for] making this debate big. Once it becomes a main subject, the rapists will also get that warning; the police will also know their part.”

Sexual violence is rife in slum areas of Nairobi. Victims often do not see such incidents as crimes, and if they do, they may do not know what steps they need to take to get justice. A further obstacle is mistrust in the police force.

“The reason why we don’t report, you know how Kenyan police are – they harass you first and sometimes they make fun of you,” one listener, whose 14-year-old daughter had been raped, told the programme. “You go there, you have no money to give them [as a bribe] and you fear them.”

The Kenyan police have come in for particular criticism for their handling of rape cases. (See Kenyan Police Needs Sexual Crimes Unit.)

Many victims believe that police officers will not take complaints seriously or make an effort to bring rapists to justice.

“When the perpetrator is influential, the victim would fear to report because he or she may think even if [they] report [it], the police will be bribed and release the perpetrator,” Syombua told listeners during the debate.

While some rape victims say they have been turned away by the police, others never even get that far, as they are deterred by the stigma they would face if the case became public, or are too shy to talk about it.

Some victims are unaware that the attack on them counts as a crime, particularly if the perpetrator is a friend or a family member. In such cases, they may also be afraid to expose someone they respect or know well, or they may fear a revenge attack.

“People fear reporting rape cases; they fear for their lives,” one listener told the debate. “At times, you might report someone and when he is released, he might come to harm you.”

During the radio show, panellists outlined the steps that victims should take and underlined the need to preserve evidence. They explained that police could not investigate if the victim did not report the crime promptly and follow the necessary procedures.

Kenyan law requires that incidents of rape are recorded in a document known as a P3 form. The victim must get the form from the police, take it to a hospital and have it filled out by the doctor who examines them. Panellists said victims should not shower or wash their clothes until police had gathered the evidence they needed.

Three years ago, designated desks were set up in many police stations across Kenya to deal with rape cases. The intention was to provide trained personnel and a private area where victims could record statements and discuss their ordeal. But lack of government funding has meant that these services have never functioned properly, making it difficult to collect the necessary evidence and investigate successfully.

“This is an area that really remains a big challenge – that our girls and women are getting raped so frequently but rarely [do] we hear these cases in court,” Lilian Wetu, a volunteer with the Federation of Women Lawyers, said.

Wetu said that it was particularly important to explain these issues to people in impoverished areas.

“The women who can report these cases are more empowered, educated, and can afford a lawyer,” Wetu said. “But in [poor areas] like in Korogocho, it is hard for them to come out. But whether they have money or not, they have a right to justice.”

Priscilla Mueni, an activist on gender issues who helps rape victims in Korogocho, says that at weekends, she generally receives at least ten reports of rape.

She told IWPR that the radio debate highlighted a number of important issues.

“For me, the show has given very rich information and it should be encouraged so that many more can hear,” she said. “We thank Koch FM for talking about this because this is a daily thing happening here.”

Nyabuto Omache, the local government head in Korogocho, was on the radio show panel, and said that discussing the problem in local media was a good way to reach people who were unaware of the issues.

“It is good for the media to be the voice of the voiceless people,” Omache said. “From the show, you could hear the thirst for information.”