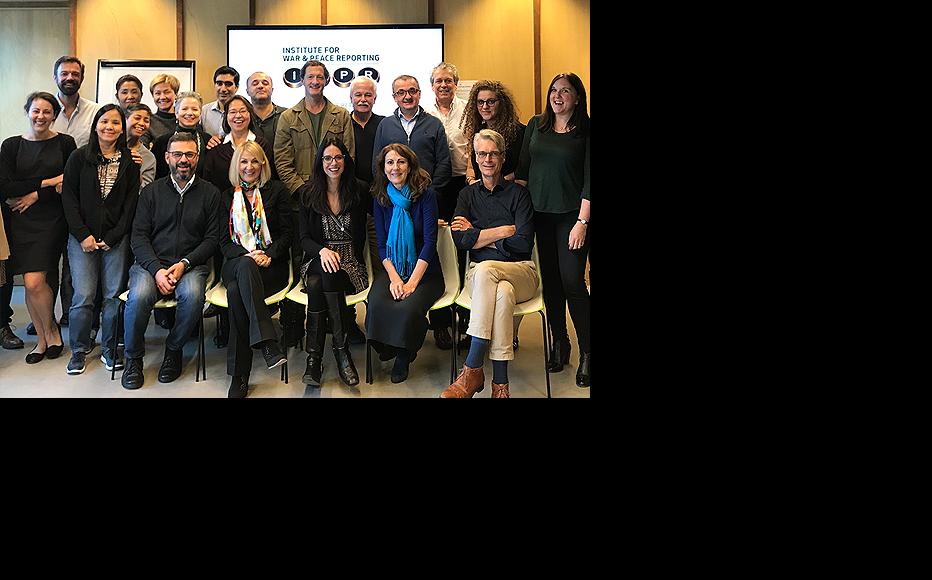 Group photo of IWPR staff during the retreat in the Hague. (Photo: IWPR)
The link has been copied

IWPR held its first-ever international retreat in the Hague to discuss current challenges and future opportunities as an organisation driving change in some of the world’s most challenging environments.

Around 35 staff from IWPR programmes in Latin America, the Middle East and North Africa, Central Asia and the Caucasus met for the four-day event, made possible with the support of the Dutch Postcode Lottery Fund.

Attendees included country directors and project leads from across IWPR’s international projects, as well as finance, HR and business development teams from London and Washington.

“The gathering was truly inspirational,” said IWPR executive director Anthony Borden. “At time of severe pressure on authentic local voices, the commitment of everyone to strengthen local voices was evident in every contribution, and the group confirmed a shared passion to champion critical thinking and freedom of expression in support of positive change,” he continued. “It was also a great opportunity just to be together and see everyone.”

The event was hosted by Adrienne Van Heteren, chair of the IWPR-NL Board and NL Country Director Steven Assies.

Outside attendees included representatives of the Dutch ministry of foreign affairs, the open source investigative network Bellingcat and Hivos.

“It was a unique opportunity to share experiences, troubleshoot and develop fresh ideas together as a group for the first time ever,” said IWPR deputy director Jerry Timmins. “Hearing the presentations from the programmes teams was a truly moving experience, as they reviewed their efforts, outlined their impact and demonstrated their huge passion. Critically, we all committed to shared values and a common vision.”

The event was held in The Hague, a location crucial to IWPR and its history. The organisation was formed during the Balkans war of the 1990s, and IWPR went on to cover the subsequent International Criminal Tribunal for the Former Yugoslavia (ICTY) trials extensively, as well as International Criminal Court (ICC) proceedings.

"IWPR’s connection with The Hague goes back a couple of decades and traces its own organisational history,” said Adrienne Van Heteren, chair of the Dutch board of IWPR. “After the ICTY was founded in 1993 in The Hague, IWPR launched a unique reporting effort from The Hague which it sustained over 20 years. The stories and analysis of the proceedings form an invaluable historic record of one of the most important steps in the development of international justice.”

The four-day event was made possible with the support of the Dutch Postcode Lottery Fund.