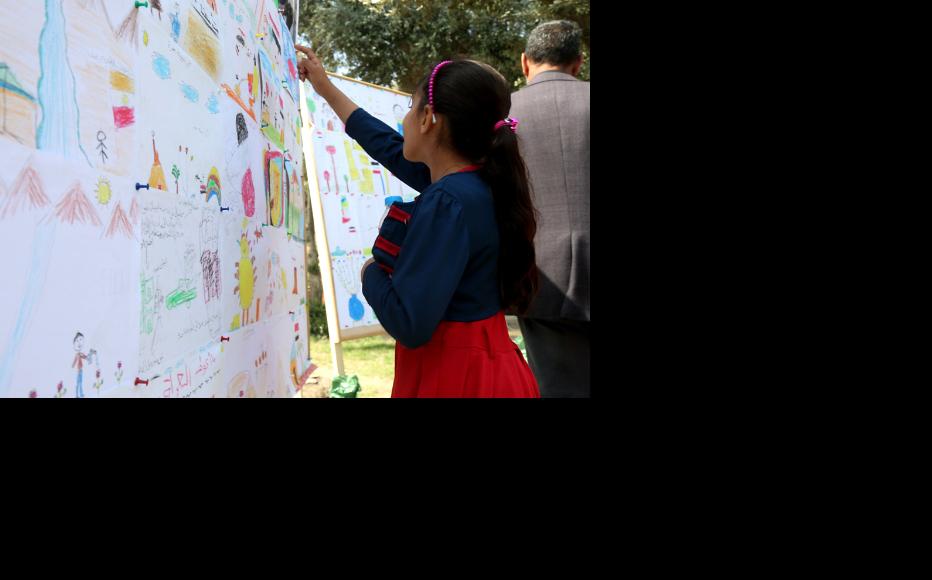 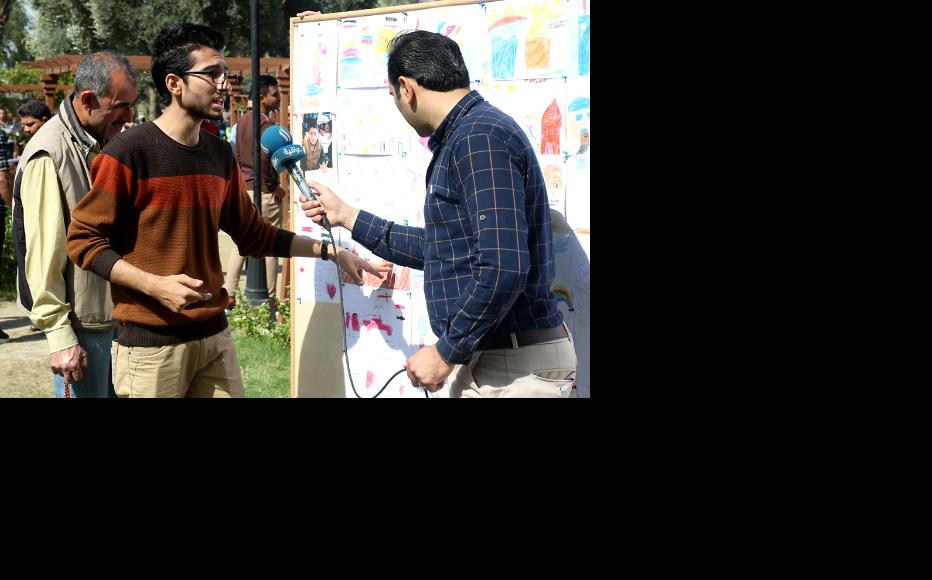 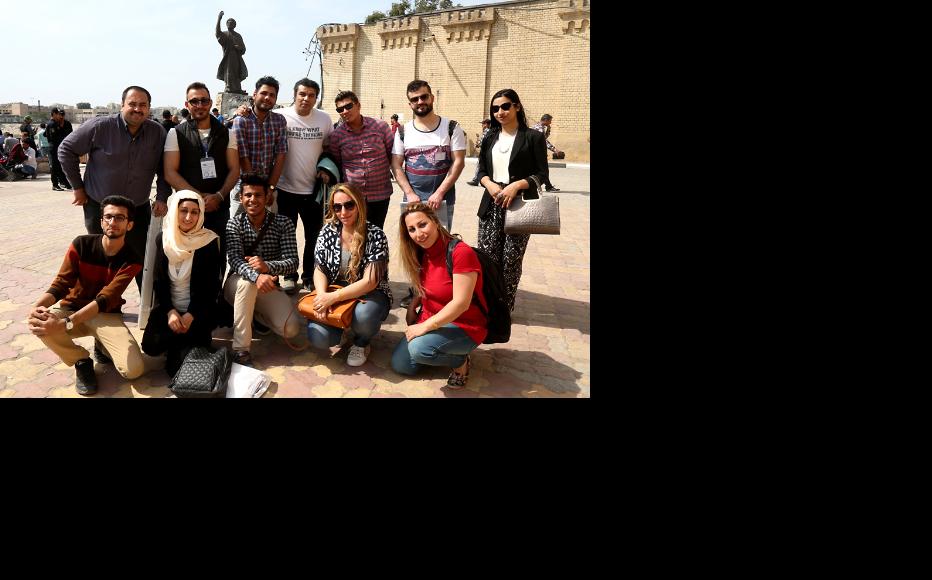 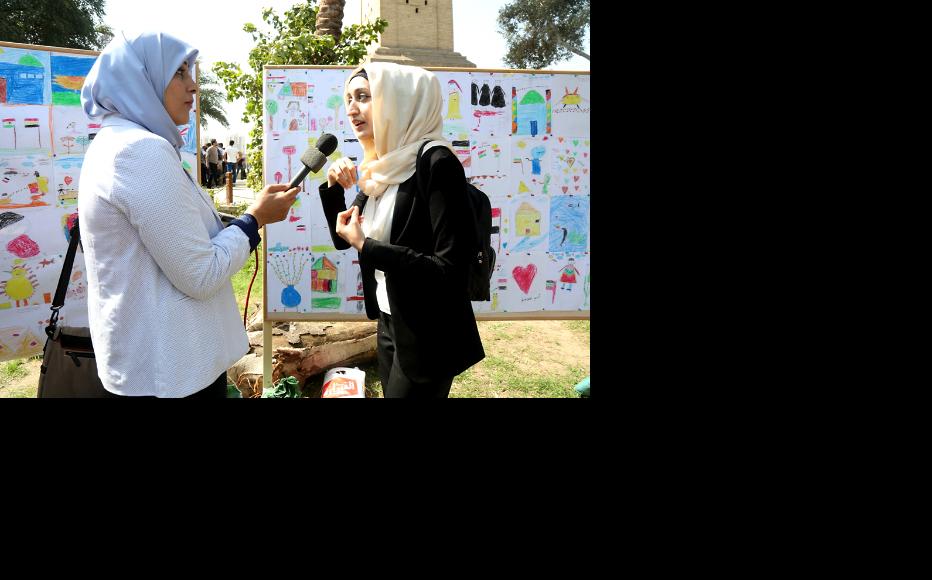 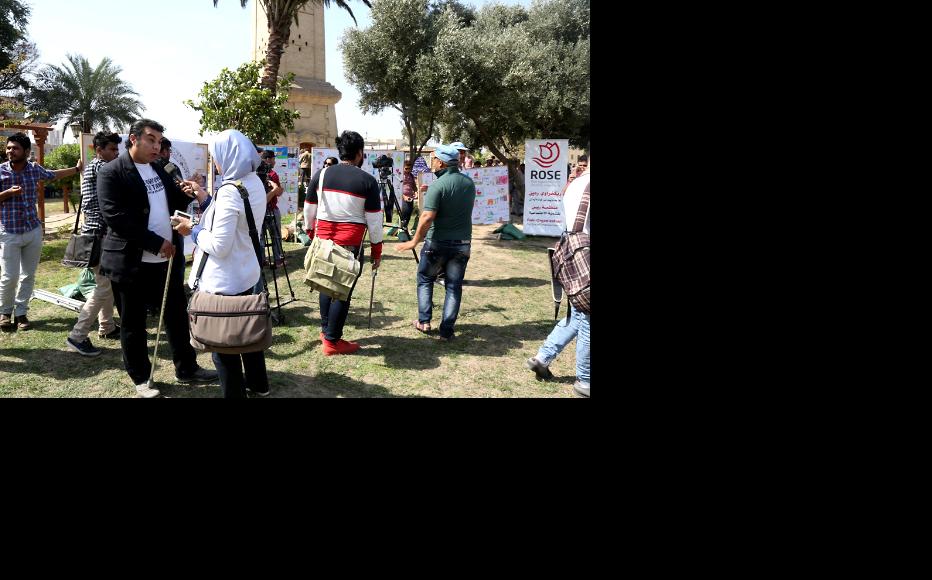 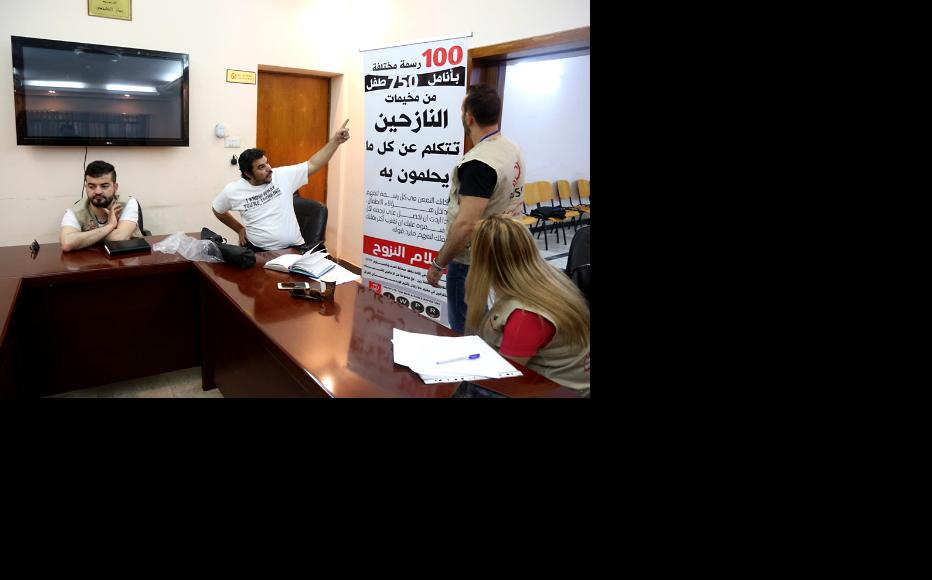 Preparations for the exhibition were held at the IWPR office in Baghdad. (Photo: IWPR) 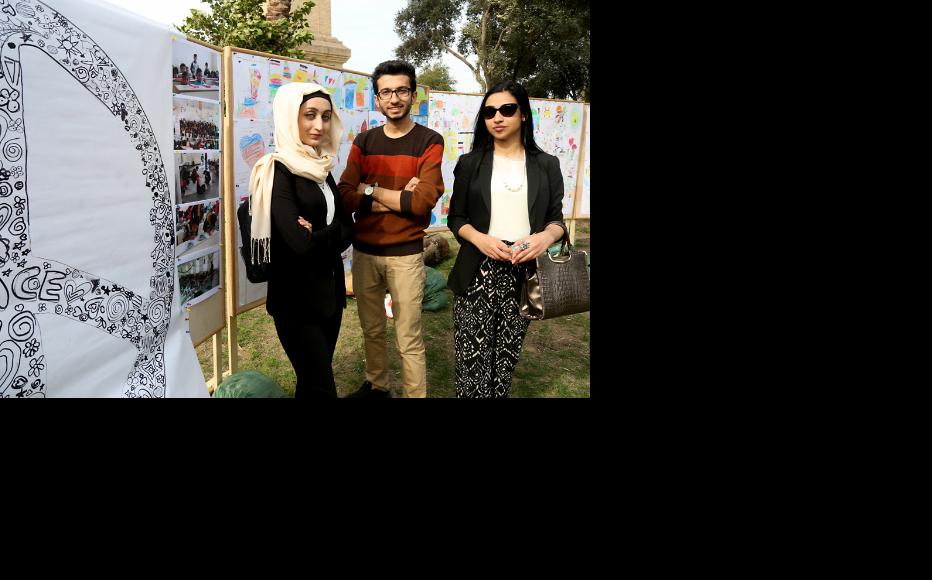 The artists who coached the children and supervised the drawings (left to right) Buboor Sabih Mustafa Nadir and Tabarak. (Photo: IWPR) 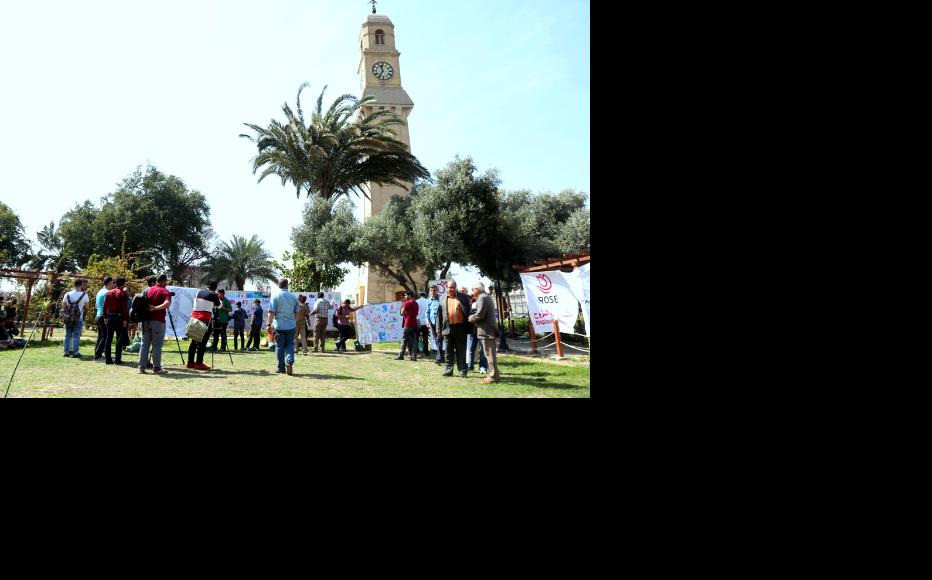 The exhibition was held in open air. (Photo: IWPR)
The link has been copied

More than 100 children displaced by Islamic State (IS) in Iraq have had their artwork displayed in a famous Baghdad cultural hub, giving them the opportunity to express their hopes, dreams and fears to a wider audience.

The pictures were chosen from workshops attended by over 700 children aged between six and 12 in Erbil last month, organised by IWPR in cooperation with the Rain Organisation for Social Empowerment (ROSE).

The artworks, displayed in an outdoor gallery on March 4 on Baghdad’s famous Al-Mutanabbi street, served as a vivid reminder of how IS still preoccupies the minds of many young internally displaced persons (IDPs).

Many of the drawings, produced last month in an IWPR-funded five-day workshop in Erbil, included scenes of blood and slaughter.

Some showed grinning militants brandishing knives. Another depicted insurgents aiming their guns at a house flying the Iraqi flag.

“Symbolism is very deep and pure in their simple sketches,” said Maytham Radhi, a well-known Iraqi painter and poet, who struggled to contain his emotions as he viewed the exhibition.

“There are very profound feelings conveyed by these children through their drawings,” he continued.

Although for some of the children this was their first attempt at expressing their feelings through art, observers said that the results were often profound.

“Their awareness is very broad, very sensitive, and highly susceptible to influence from the outside world. Once they have the tools to express themselves, in a suitably safe environment, they will always be able to amaze us,” said Zuheir Ahmed, a child psychiatrist.

“You can imagine a child’s mind as a highly advanced antenna, picking up the weakest of signals and magnifying them,” he continued. “But the display screen connected to the antenna is fuzzy and unclear. Therefore, we need to provide suitable means and an environment that encourages them to express feelings externally. Drawing is an important method of expression, often used in psychoanalysis, with healing functions as well.”

Alongside images of weapons and violence, children also drew pictures with messages of peace, love and even national unity.

“I closely examined the bold lines, and clear colours used by these displaced children, and also the phrases they attached to their pieces. My feelings resonated with their brushstrokes,” journalist and activist Jumana Mumtaz said after visiting the gallery.

“At one moment, I am overwhelmed with joy as they show their attachment to the unity of Iraq as they mentioned ‘Sunni, Shia, and Kurds’, but at another I am heartbroken seeing their suffering and ordeals,” she explained.

“Standing in front of the paintings, I was thinking about the pistols in their imagination, and [the faces of] IS faces which keep appearing in their drawings; instead of basic rights such as having a peaceful home which they have been deprived of for the past two years or so,” Mumtaz added.

“We divided the training among four artists, each of them in charge of two workshops per day over five days,” Qader said. “A large number of IDP children, along with poverty-stricken local children, participated in the project to depict their dreams and transmit their voices to society.”

Mustafa Nader, 20, one of the workshop trainers, said, “I had no idea how these children felt.

“All what I knew was that they had left their homes for the uncertainty of camps, poverty, cold and heat. But through this experiment, I discovered that they also left behind all their dreams and even wishes and future goals. We are here to reclaim their dreams, and present them as a message to Iraq and the international community.”

Nader said that he had been surprised by some of the content.

“Some expressed sadness, and the dark side of their memories, those of displacement and IS terror attacks; while others reflected happiness, and the bright side of his or her life,” he said.

Ibrahim Darraj, an artist who visited the gallery, said, “I was attracted by the children’s innocence I saw on these sheets.

The images varied, he said, “between a happy dream with a glimpse of hope, and a bitter memory… filled with fear and pain”.

“Your message was delivered, thank you for putting a smile on the faces of kids, as they draw their dreams,” he added.

Iraq
Children
Connect with us