Armenia Examines Its Record on Cancer

The mortality rate has increased, but so have government efforts to fight the disease. 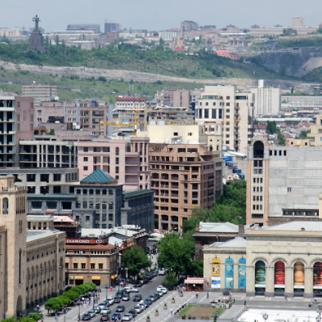 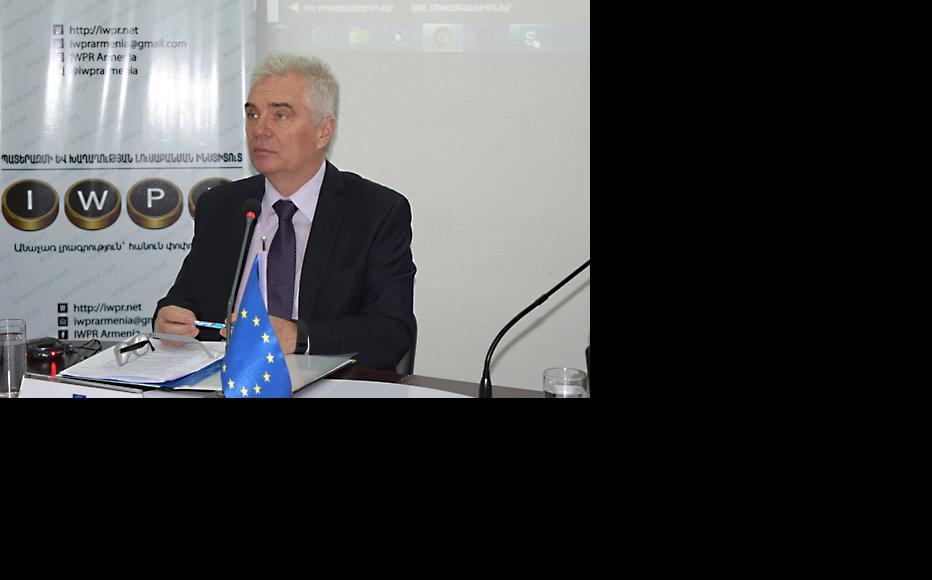 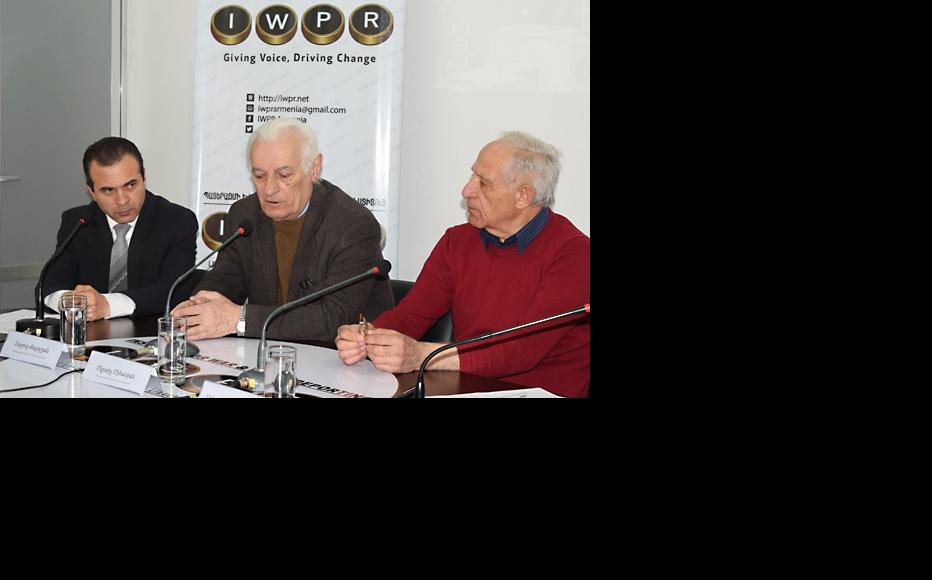 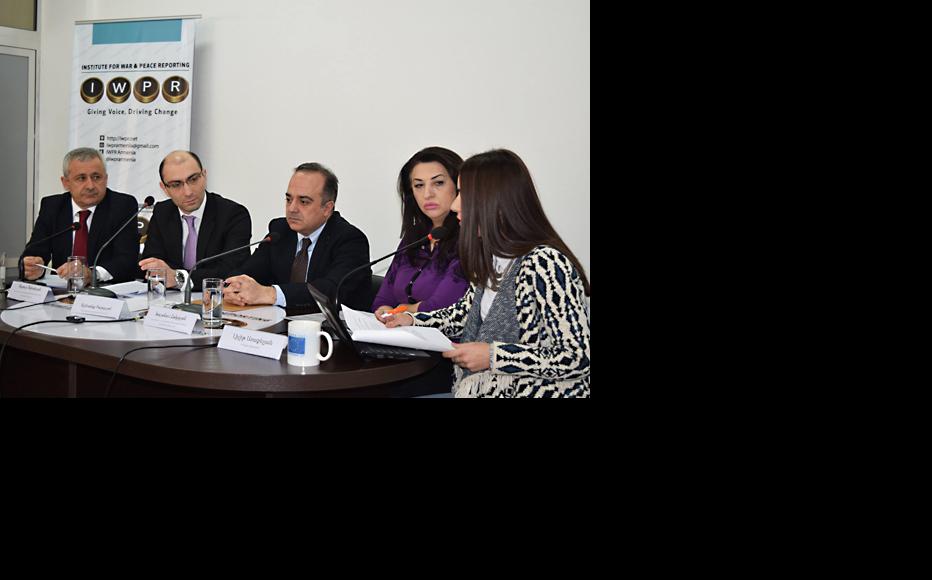 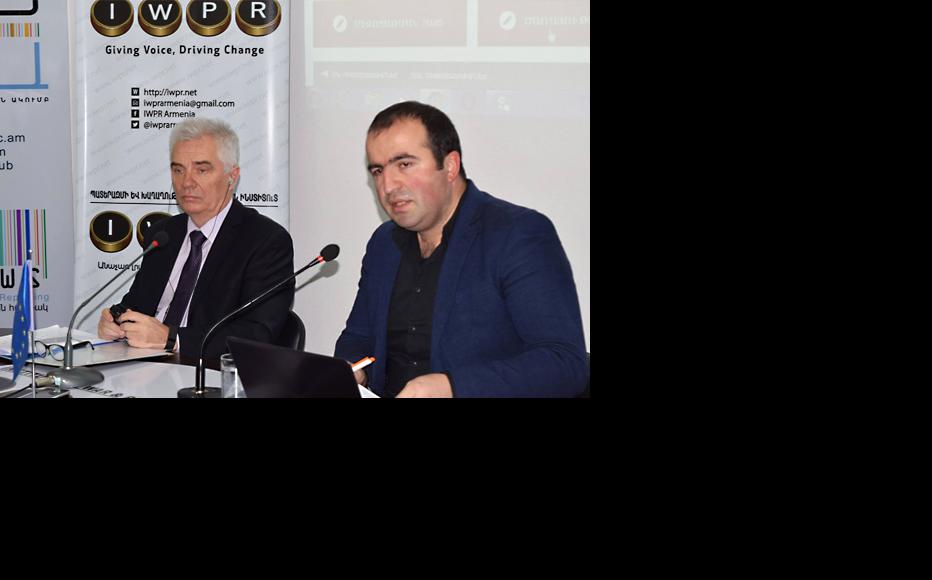 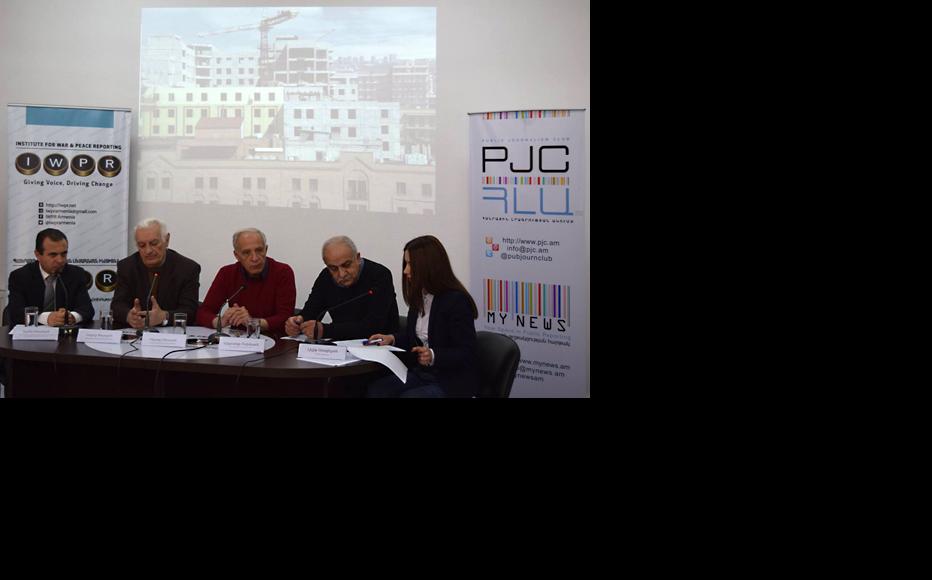 Round table on Urban Development. (Photo: IWPR)
The link has been copied

IWPR Armenia hosted a series of lively discussions earlier this year, in cooperation with the Public Journalism Club (PJC) and the Media Center.

Designed to give journalists an opportunity to put a wide range of questions to experts and officials, topics covered included public health, urban development and European ascension.

The first panel dealt with the prevalence of cancer in Armenia and explored the strengths and weaknesses of the country´s healthcare system.

The January meeting was moderated by journalist Arshaluis Mghdesyan, who presented recent data published by the World Life Expectancy database which caused controversy and concern in Armenia’s media and among the public.

According to this data, Armenia had the world’s highest cancer mortality rate in a ranking of 172 countries based on 2014 figures.

Government officials deny the accuracy of the data.

Alexander Bazarchyan, deputy director of the National Health Institute, said that 188 deaths from cancer per 100,000 people had been registered in 2014.

However, these figures contradicted the data published by World Life Expectancy, which reported 229 deaths per 100,000 people for the same period.

Bazarchyan pointed out that the website did not indicate its sources and methodology used, adding that the whole study did not seem to be well founded.

Tom LeDuc, founder of the World Life Expectancy website and CEO of the Global Life Partners organisation, sent a written answer in response to queries from PJC and IWPR.  He said both the chart and the study were based on 2014 World Health Organisation data and figures from national statistical offices of various countries. However, he did not provide any links.

Artur Avetisyan, an oncology surgeon and clinical director of the National Center of Oncology, told the event that cancer mortality had decreased in developed countries. However, Armenia still faced challenges, he continued.

“Today, our methods of treatment are in compliance with international standards. We also have modern devices of radiation therapy in the National Oncology Center. But the accessibility to medicines is another question. We have recently received very expensive medication, which is offered to patients absolutely free of charge.

“Every week, however, we admit to hospital patients at a late stage of the disease, who go to various healers and quacks,” Avetisyan said.

Although mortality was decreasing, Grigor Badalyan, chairman of the Association of Armenian Oncologists, said the number of cancer patients had increased by three to four per cent per year.

“There were 7,593 primary cancer patients in 2010, while in 2014 their number grew to 8,365. There are various reasons for this, but it mostly depends on food, carcinogen radiation and smoking. These are key factors in 40 to 60 per cent of the cases, other causes are still unknown,” he said.

The second event  was a press conference with Piotr Switalski, head of the EU delegation to Armenia, who discussed the country’s relationship with the wider European project.

Late last year, the EU and Armenia launched negotiations on a new overarching framework for deepening their bilateral relations.

The talks came two years after the failure of an association agreement, which would have included a deep and comprehensive free trade area. But, in September 2013, Armenia announced its decision to join the Moscow-led Eurasian Economic Union (EEU).

Switalski told the February meeting that Armenia and the EU had now embarked on a new, constructive phase of their relationship.

“The EU has a positive agenda – we are trying to build something new, to develop a new model of relationship. I am very glad that the political dialogue between the EU and Armenia is developing quite well – last year President [Donald] Tusk visited Armenia, and this year we are expecting a visit of High Representative [Federica] Mogherini quite soon. This is a good signal of the willingness of the EU to develop a productive relationship with Armenia,” Switalski said.

Those present noted the EU-Armenia relationship was strongly interconnected with Russia, particularly against the background of Moscow’s deteriorating relations with the European bloc since the Ukrainian crisis. Armenia has been closely cooperating with Russia on security issues, especially given the unresolved Nagorny Karabakh conflict with Azerbaijan.

Switalski said that he hoped Armenia’s EEU membership would not be incompatible with furthering relations with Europe.

“We are implementing a new revised neighborhood policy, which we hope will coalesce into a new framework agreement,” he continued. “The strategic objective the EU is pursuing in the negotiations is to show that it is possible to be a member of another supranational organisation and simultaneously have good relations with the EU.”

The EU is Armenia’s biggest foreign donor and, according to the ambassador, spends over 50 million euros in Armenia each year.

Europe is also paying close attention to Armenia’s ongoing constitutional changes following a referendum last December that will see the country shift from a semi-presidential system to a parliamentary form of government.

“Our aim is to support Armenia in its efforts to stabilise, prosper and modernise. The main method of supporting those efforts is to help Armenians to design and benefit from proper institutions and laws,” Switalski noted.

The seismic risks inherent in built-up areas in Yerevan and the state of Soviet-era buildings were the focus of a third round-table.

The event was moderated by the journalist Lilit Arakelyan, who gave a brief overview on the risks arising from the country’s recent construction boom.

Over the past two decades, large-scale building in Yerevan has caused serious urban development issues, including as the demolition of old buildings of historic and cultural value.

According to the National Statistical Service, the total area of residential buildings built in Yerevan between 2005 and 2015 was more than 2.6 million square metres.  This was six times more than between 1991 and 2004.

This also raised concerns of what the consequences of an earthquake could be in the city’s densely populated centre. The whole territory of Armenia is located in a seismically active zone. According to the ministry of emergency situations, 80 per cent of the 4,800 high-rise buildings in the capital do not meet safety requirements.

Alexander Movsisyan, adviser to the minister of urban development, said that 30 to 31 billion US dollars was needed to reinforce old buildings to bring them into compliance with current standards.

Mkrtich Minasyan, the chairman of the Union of Architects of Armenia, said there was no place for more construction “as the centre of Yerevan is extremely overbuilt”.

“As a result of haphazard construction works, we have been deprived of historic buildings and on the other hand, we have urban density occupying public green areas and taking every square metre of the city,” he said.

“In the years of independence, widespread privatisation flourished and basements of buildings were sold and used for public or other purposes, which caused great damage to the construction system. The tendency to construct attics worsened the situation,” Kalashyan noted.

Armenia
Environment, Health
Connect with us