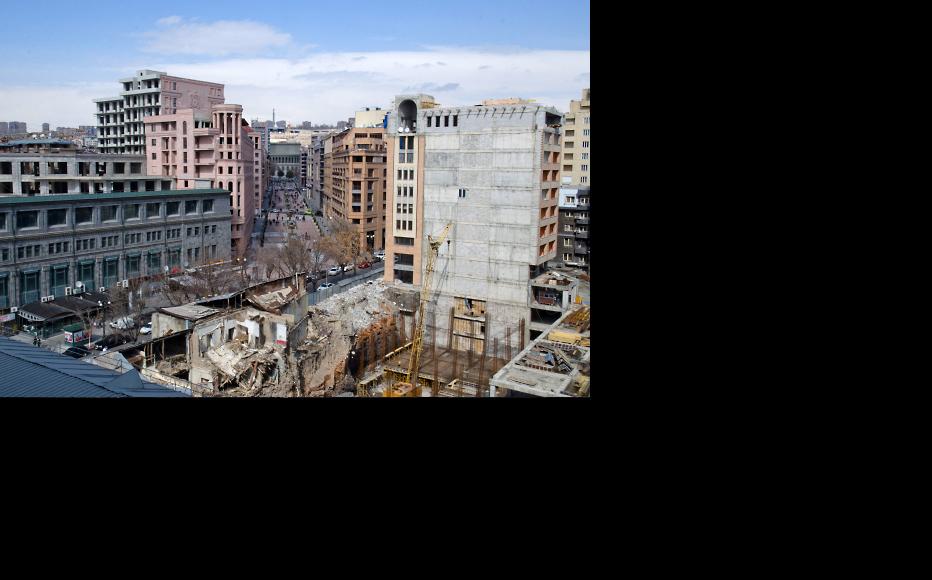 The Northern avenue was the first large construction project that started in 2000 in central Yerevan. (Photo: Hayk Bianjyan) 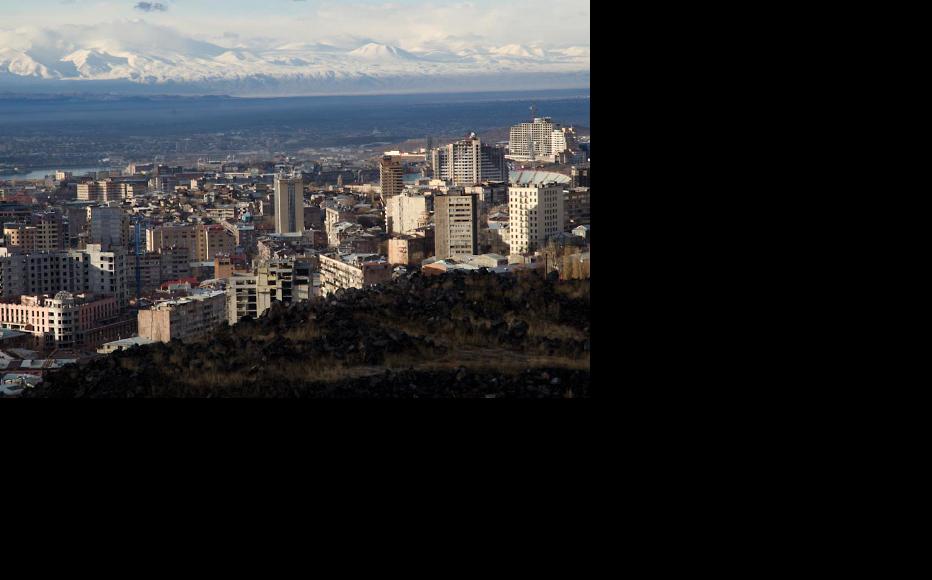 The new face of an old city with 2,800 years of history. (Photo: Hayk Bianjyan) 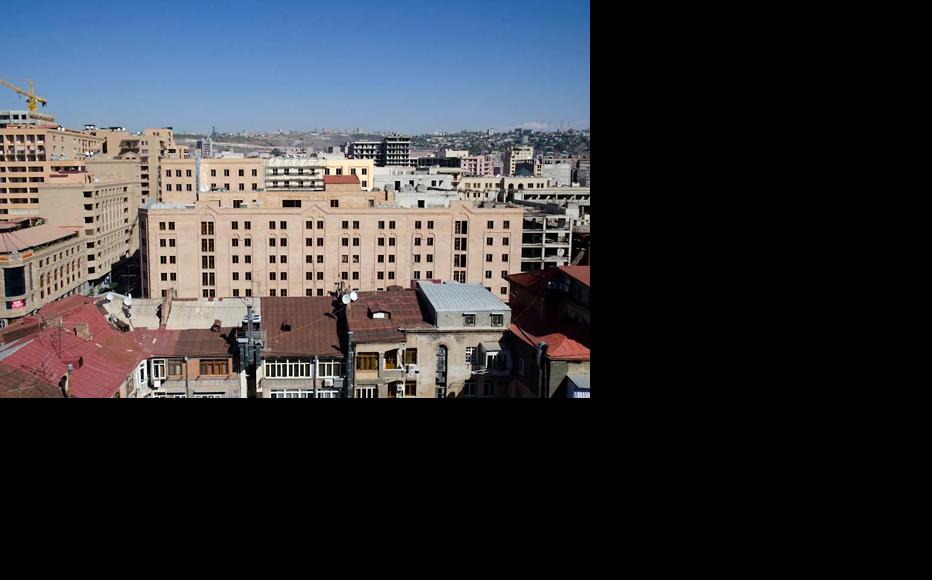 A view of central Yerevan from the rooftop of a building in Zakyan street. Yerevan, October 2012. (Photo: Hayk Bianjyan) 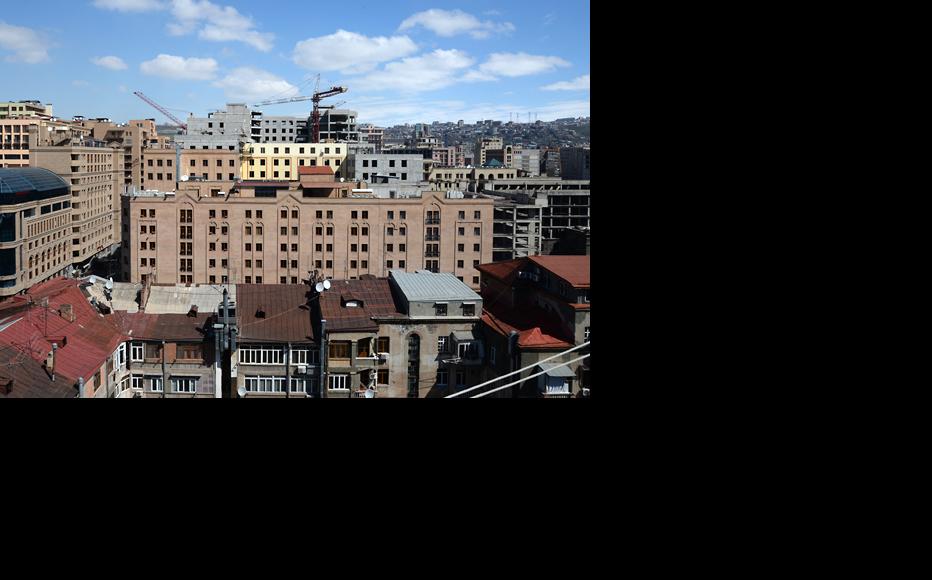 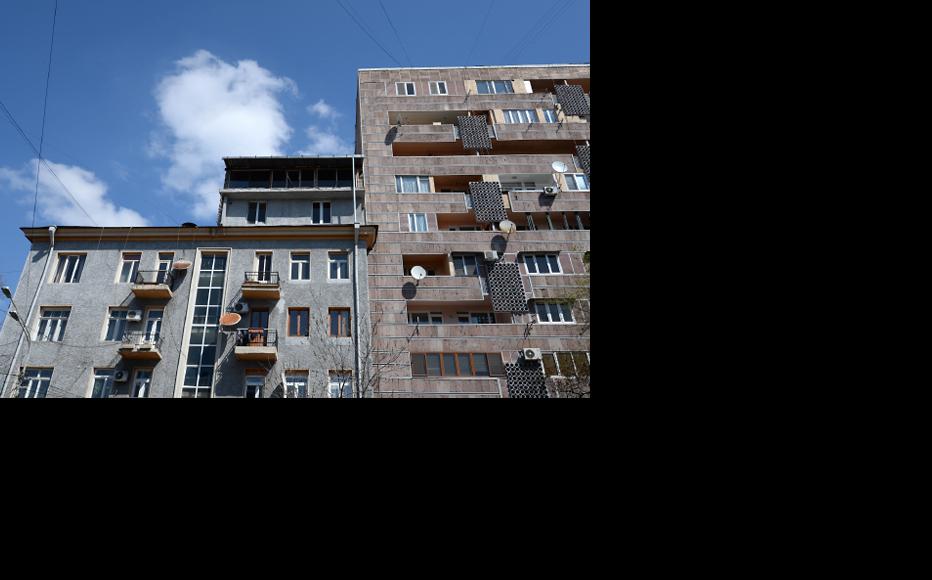 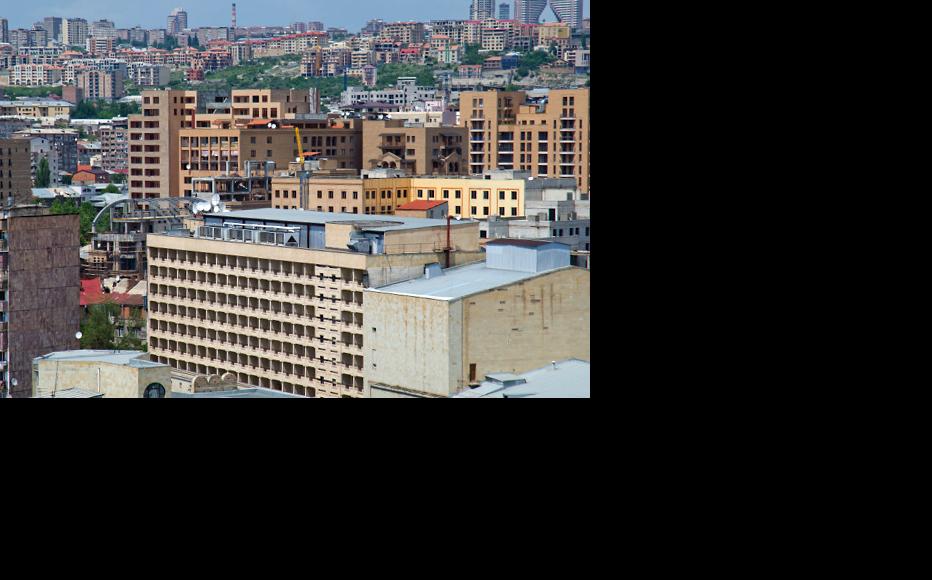 Most of the buildings in this picture of central Yerevan were built during the last decade. (Photo: Hayk Bianjyan) 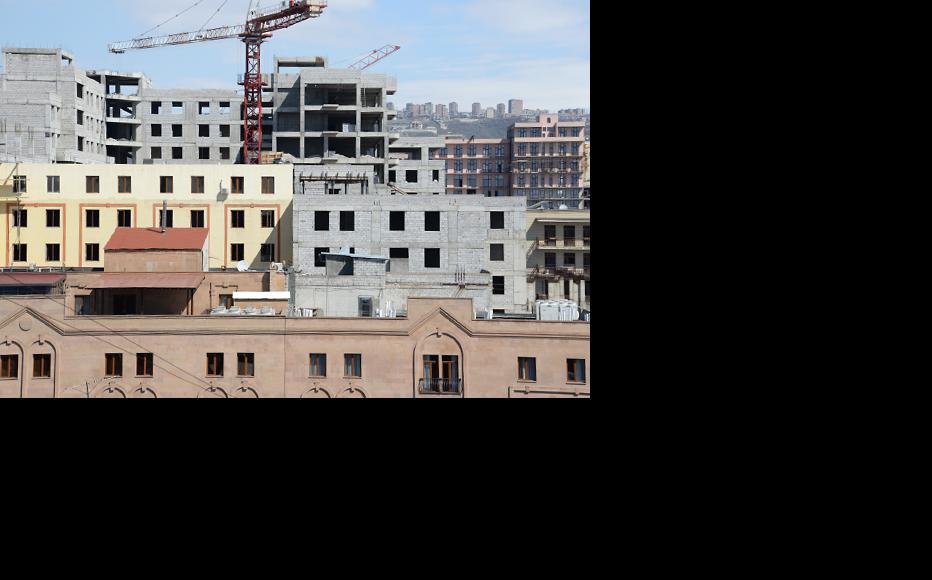 New buildings are getting higher and higher. (Photo: Hayk Bianjyan) 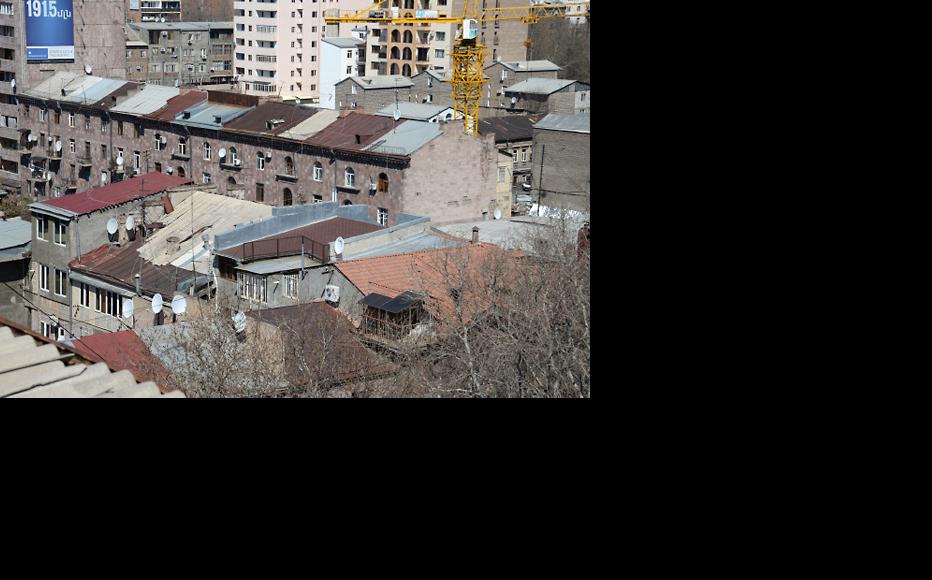 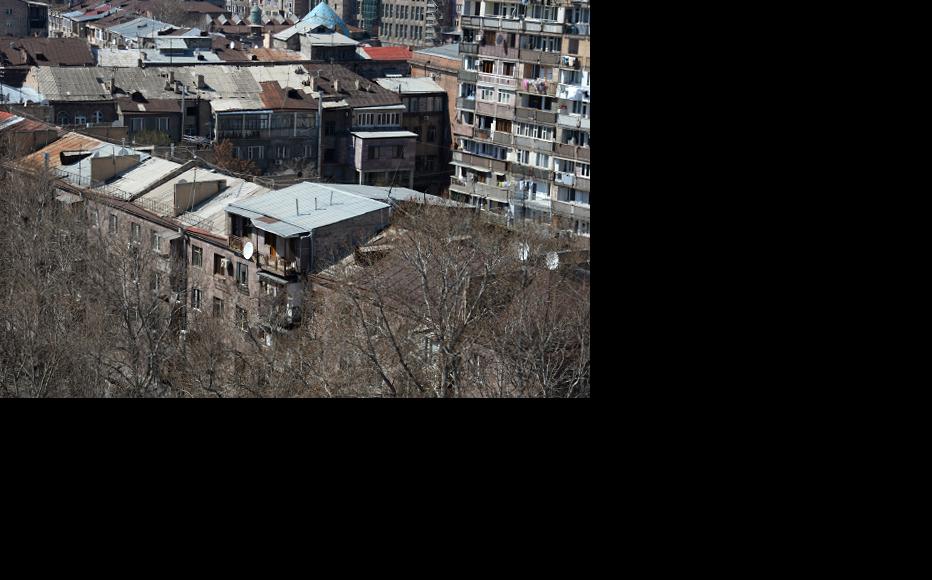 Residents added a new flat with balcony on top of the roof of an old building in Zakyan Street, Yerevan. (Photo: Hayk Bianjyan)
The link has been copied

Yerevan resident Ashot Kilikyan points towards new buildings made out of reinforced concrete, separated by a narrow passage from his two-storey house.

“I have no doubts that within a few years the whole area will be filled with such similar square, cold boxes,” the 83-year-old said.

Kilikyan’s home was built in the second half of the nineteenth century and is one of the few old buildings left in the centre of the capital.

A Soviet-era inscription, which reads “protected by the state”, is still visible on a wall of the house where he has lived with his family for many years.

But the modern-day state is no longer interested in its preservation. The government has given permission for its demolition and the land has been sold to a high-rise construction company.

In recent years, ambitious building projects have been rolled out in the centre of Armenia’s largest city.

According to the National Statistical Service (NSS), more than 2.6 million square metres of housing was built in the capital between 2005 and 2015, nearly six times more than between the post-independence years of 1991 and 2004.

Urban development has become an attractive alternative source of income for a country where the economy is based on mining, agriculture and trade.

The wealthy elite and the Armenian diaspora are particularly keen to acquire newly-built flats or offices in the centre of Yerevan.

Some locals complain that this not only shows a disregard for the value of historical buildings and the rights of local residents, but may also pose a danger.

Armenia is prone to earthquakes and experts warn that buildings are not being constructed or adapted in line with safety requirements.

According to Armenia’s National Survey for Seismic Protection, earthquakes with a magnitude of 5.5 or greater recur every 30 to 40 years.  The last such earthquake took place 28 years ago in December 1988 in the city of Spitak, 100 kilometres north of Yerevan.

Experts believe there could have been fewer victims if the Soviet-era buildings had met seismic stability standards and if residents had not made dangerous adaptations to their flats.

Yerevan´s housing stock is effectively the same as in Spitak, with much of it dating from the Soviet period.

According to the ministry of emergency situations, 80 per cent or around 3,500 multi-storey buildings in the capital do not meet safety requirements.

“Seismic safety requirements were tightened after the 1988 Spitak earthquake,” explained Grigor Azizyan, director of the ArmProject Institute, an architectural company.

New multi-storey buildings, referred to as “elite houses”, are replacing one or two-storey houses in the old districts. Sometimes, these new blocks are squeezed into the passages between Soviet-era buildings.

In the event of an earthquake, the dense arrangement of old and new buildings could be another serious threat to residents, Azizyan said.

Many city-dwellers also take creative liberties when it comes to maximising the comfort of their homes.  Some people put in new windows and interior doors without regard to the integrity of supporting walls.  Others build an extra floor on the roof to increase their living space.

The chairman of Armenia´s Union of Architects, Mkrtich Minasyan, said that construction was not only disfiguring the city but also weakening the stability of its buildings.

Minasyan added that the government was not ensuring that that “the seismic demands of the new buildings are being observed when [it] allows to erect one, two or sometimes three floors on the roof of 70 to 80-year-old buildings”.

“I have repeatedly demanded a response from the relevant city officials as to why they give permission for the construction of one, two and sometimes three new floors on the roofs of buildings constructed during the Soviet era,” she told IWPR.

“Despite assurances from the authorities that these buildings are seismically resistant and new floors do not affect the stability of the building, I am very sceptical,” she continued, adding,  “In my opinion, there may be risks associated with corruption.”

Narek Sargsyan, the minister of urban development, said that he understood such fears.

“Generally, there is a problem with seismic safety, as the buildings have been worn down over the years, and it is advisable to limit dense construction,” he told IWPR.

But he said there were few risks in building extensions on top of Soviet-era buildings.

“If such developments are organised by specialists, based on [the plans of] a qualified engineer, then there should be no problems,” he said.

Government officials have promised that the buildings most vulnerable to earthquakes are to be demolished after their current residents are moved to new specially-built housing.

However, as this initiative is run and also funded by the state, it has been progressing very slowly.

Minasyan said that over the past 15 years, about four dozen examples of classic architecture had been demolished in the centre of Yerevan. He added that almost all these demolitions had been motivated by business interests.

“We are concerned that Yerevan’s historical monuments are disappearing.  These monuments are being destroyed, and this impoverishes our city,” Minasyan continued.

“Sometimes, they retain only the façade of a historical building, but this is not a solution and cannot be considered the way to preserve the monument.  It should have been necessary to develop a general concept from the start, which was not done.”

Sargsyan said that the government was sympathetic to such complaints and acknowledged that many local people were unhappy about the pace of construction.

As a result a bill on the urban development of central Yerevan was due to be discussed by the National Assembly on March 14.

“It sets forth strict formula, particularly on density.  In the centre, such concentrated construction will be strictly limited,” he said.

“After the law is passed, such additional developments will be prohibited.”