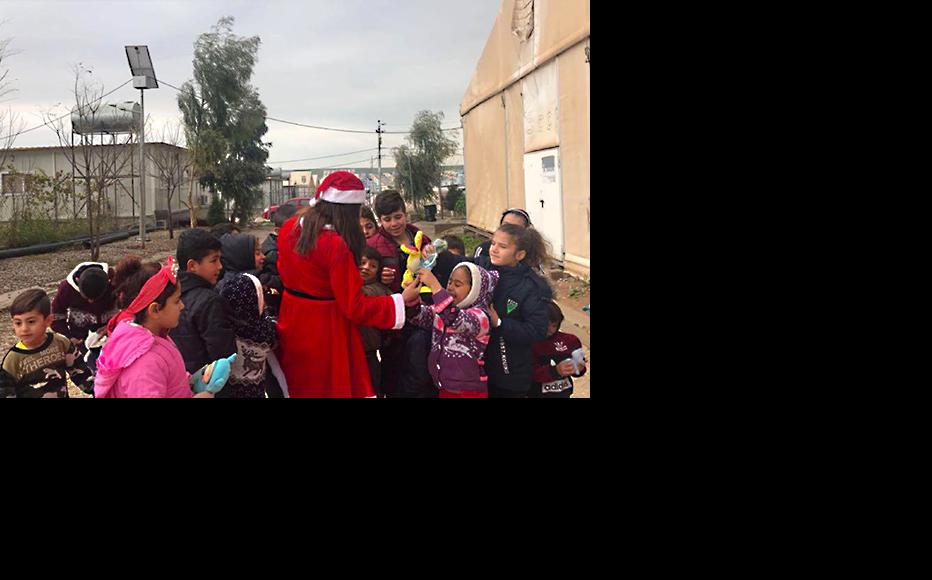 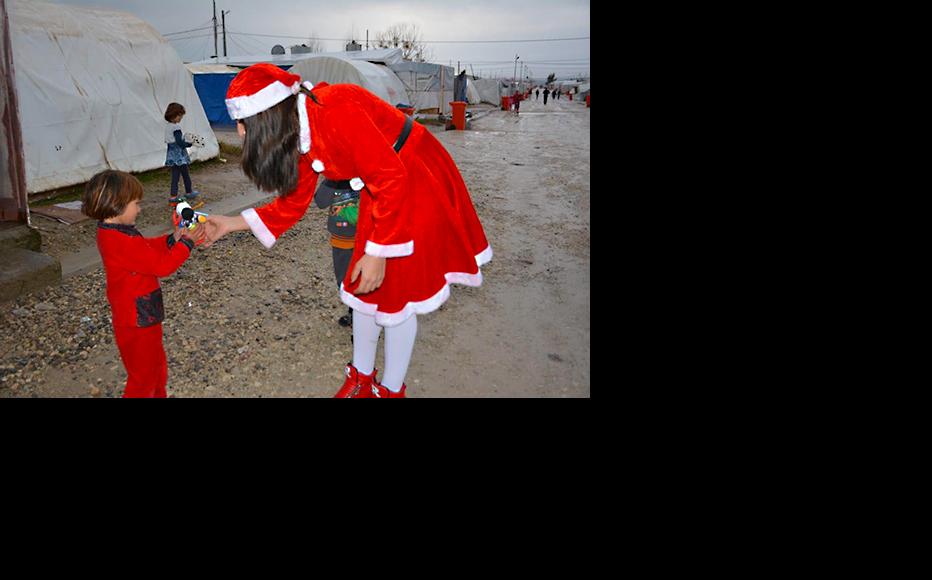 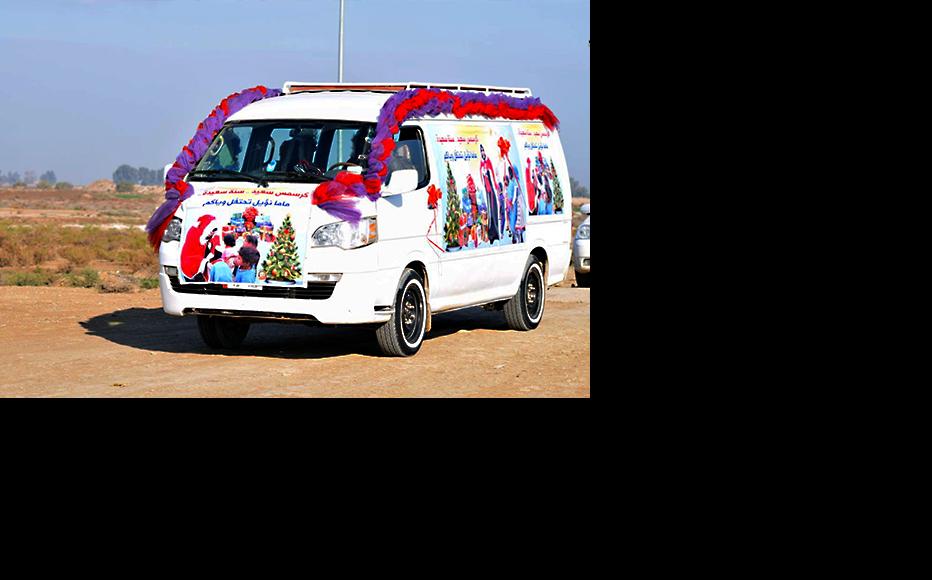 A bus carried the volunteers to the gypsy village. (Photo: Mohamad Al Jleihawi) 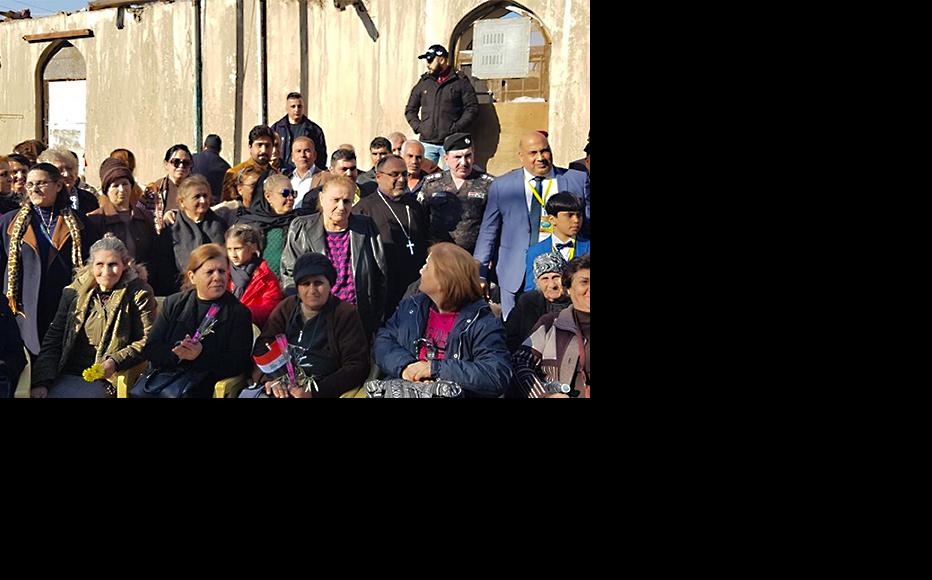 A group photo of the prayers at Al Habaniyah Church. (Photo: SAWT Al Shabab Radio)
The link has been copied

In one striking success, an Assyrian Christian church that had been closed for 15 years was renovated and reopened thanks to the efforts of a group of IWPR mentees.

The Mar Korkis church in Anbar’s Al Habbaniyah district had been abandoned since 2003, when around 1,000 Christian families left the area due to the deteriorating security situation. Partially destroyed by an explosion in 2005, the church had been semi-derelict ever since.

IWPR-trained journalist Aya Al Mashhadani highlighted the church’s plight in a report on coexistence in Al Habbaniyah for which she interviewed the Shia security guard who still watched over the site.

In response to the story, Sawt Al Shabab radio station - itself headed by IWPR-trained journalist Mohamad Sleiman - launched a campaign for the church’s rehabilitation.

Volunteers, local civil society organisations and municipal officials all joined together in a mass cleanup just before Christmas, braving heavy rain to light candles, decorate a Christmas tree and ring the church’s bell.

Christians who heard the Sawt Al Shabab follow-up report on the clean-up campaign said that they were deeply moved, and the Assyrian Church diocese in Baghdad decided to hold a mass in the church in response. Their delegation, welcomed by local Muslims holding olive branches, hosted a service on January 11, 2019 attended by 250 Assyrian Christians.

Valentiana Yuwarich, 46, a Christian from Baghdad who was among the visitors, said, “Thank you so much to the beloved people of Habaniyah and to Sawt Al Shabab radio. This visit will be always remembered in the history of Iraq as a birth for a brighter Iraqi future.”

Other deeply symbolic initiatives over the festive season included efforts by IWPR activists Manar Al Zobeidi, a Muslim, and Nazek Barakat – a Yezidi – whose projects promote empathy towards minority communities in northern and southern Iraq.

Al Zobeidi, whose campaign Gypsies are Human was launched in 2016, organised a visit to the village of Al Zohour village on the outskirts of Diwaniyah city to mark Christmas and New year.

Despite being from a religiously conservative background, al Zobeidi issued a call on social media for other female volunteers to don Santa costumes and visit the gypsy village.

Five women answered her call and joined her in her visit, all wearing Santa costumes and pushing a decorated cart loaded with gifts for the children.

The celebration was attended by international media including Reuters, France-Presse 24 and AlHurra TV.

After the event, London-based al-Arabi TV broadcast a talk show dedicated to the issue of gypsies in Iraq and Kurdistan, with Al Zobeidi as the main guest.

Meanwhile, Barakat raised 200 dollars to buy Christmas presents for internally displaced people (IDPs) in camps in Dohuk.  Barakat, herself displaced from Sinjar after it fell under the control of the Islamic State, said she hoped her initiative would help IDPs feel integrated and thus contribute to the reconciliation process.

Her efforts received widespread coverage in various media and she was nominated for the Al Sheikha Fatima Bint Mubarak Prize in the Emirates. Launched in 2018, this prize aims to honour individuals who create outstanding social initiatives.

Iraq
Reconciliation
Connect with us