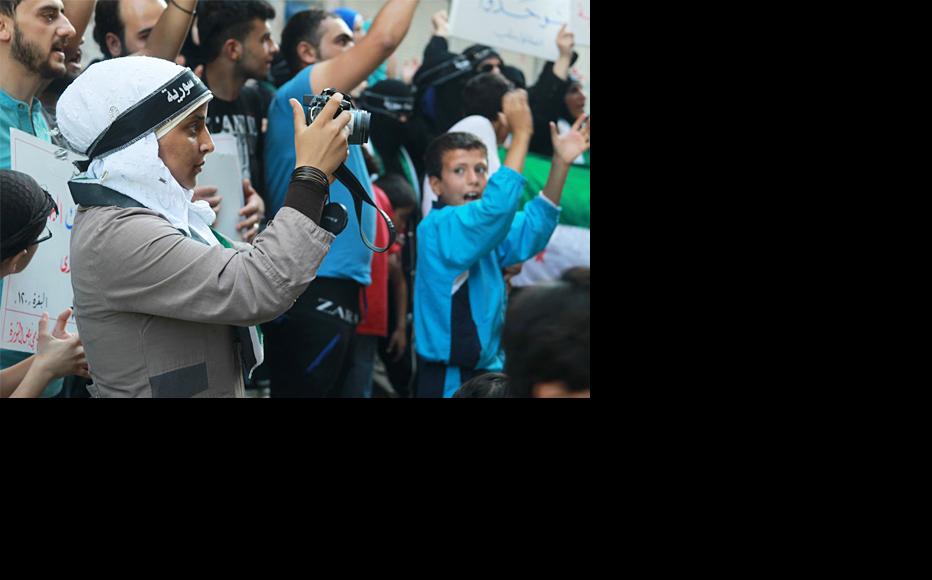 Photographer from the Syrian Women's Association covering a protest in Aleppo. (Photo: Ammar Abdullah)
The link has been copied

Around the world – in countries suffering open warfare or militia violence, dictatorship or civil tension – the voices of local journalists and citizen reporters have never been more important. Nor have they been more at risk.

The explicit focus of Islamic State and other extremist groups on so viciously attacking media and independent voices in Syria, Libya and elsewhere in the Middle East, and indeed in Europe, underlines the stakes.

In Azerbaijan, the ongoing detention of leading journalist Khadija Ismailova and many others is part of an intensifying cycle of repression. The conflict on the ground between Russian and Ukrainian forces, meanwhile, is a paralleled by a war of ideas in which any pretense at objective truth has been abandoned by the Kremlin’s expanding media empire.

The same holds true for many authoritarian and corrupt governments from Latin America and Africa to Asia, and for many areas of internal unrest and conflict.

Journalists are directly targeted in all of these regions precisely because they are so threatening to closed regimes, extremist movements and non-transparent political and financial practices.

Especially with the rapid emergence of new technologies, the capacity for independent voices to be heard from the frontlines has never been greater – and those with information to hide and power and privileges to protect know this.

Increasingly, it seems, so does the public at large. While media in the West may not enjoy the highest of reputations nowadays, there is a widespread appreciation of the importance of a free press and of the vital efforts of independent voices at the frontlines. This was powerfully demonstrated by the nearly four million people who took to the streets of Paris in support of the magazine Charlie Hebdo.

These conflicting trends encapsulate the paradoxes of World Press Freedom Day in 2015. Against the increasing risks, there are radically evolving technologies and a growing vibrancy in local journalism. Against the cynicism, there is profound, even passionate, support for free media.

At this time, we at the Institute for War & Peace Reporting recall colleagues over the years who have died in the service of journalism, and we honour their ultimate sacrifice. We celebrate the courageous efforts of colleagues now – whether in areas of open conflict, government repression or extremist violence – who are still taking risks to report and bear witness.

And we recommit to our efforts to provide support and assistance to local voices in areas of conflict and crisis around the world – building skills, strengthening capacity, and providing platforms from which their voices will be heard.

Anthony Borden is Executive Director of the Institute for War & Peace Reporting.

Syria
Media development
Connect with us