Programme expands its reach to dozens of news portals and advertisers.

Programme expands its reach to dozens of news portals and advertisers. 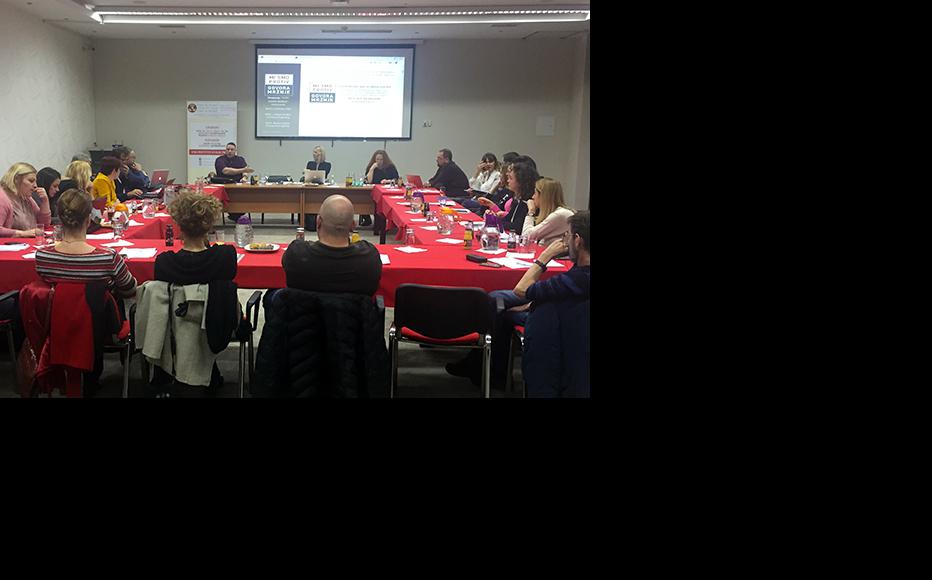 Representatives of online portals participating in the campaign exchanged their experiences at a conference held in the town of Konjic on 12 December. (Photo: IWPR) 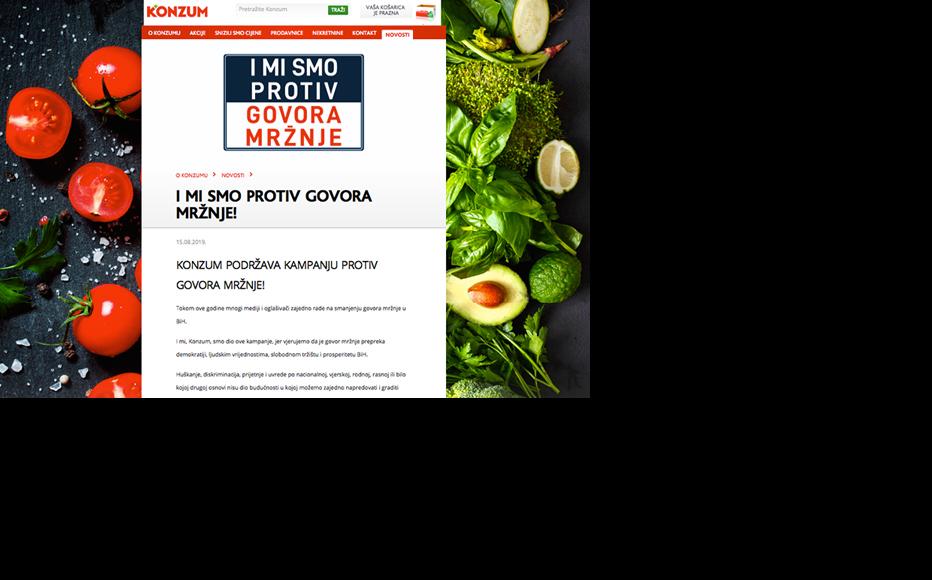 Campaign's banner "We Too Are Against Hate Speech" on Konzum's website, one of the biggest retail chains in Bosnia.
The link has been copied

IWPR and local partners in Bosnia and Hercegovina (BiH) marked the end of the second stage of their project to combat online hate speech with a conference where participants shared their experiences of the innovative campaign.

In 2018, IWPR joined forces with the Press Council BiH and Media Content Management (MCM) to renew efforts to limit the space for hate speech in this deeply divided post-conflict country.

In the second stage of the campaign, implemented in 2019, IWPR and its partners expanded the project’s reach to a larger number of stakeholders. In addition to more than 20 news portals participating in this campaign, dozens of marketing agencies and advertisers have been invited to contribute to the project.

Last year’s Stop! Hate Speech campaign indicated that many editors deliberately ignored insults and derogatory speech online in the belief that this would increase the number of visitors to their website - and consequently, their marketing value. This stage of the campaign significantly raised awareness among advertisers that online media sometimes exploit hate speech as a tool to increase profit.

Many advertisers whom IWPR and its partners approached this year expressed their support by posting the campaign’s banner on their webpages and social media profiles, thus letting customers and partners know that they too opposed hate speech. Some even went a step further and offered their support in other ways.

One of the leading retail chains in BiH and Croatia, Konzum, put the campaign’s banner on the front page of their August catalogue, with 250,000 copies distributed all over BiH.

Many advertisers approached the campaign team independently, asking to get involved. All the advertisers that the team talked to agreed it was high time for such a campaign and that the whole community must be included in efforts to limit hate speech and its devastating consequences.

Some companies stressed that they were deliberately avoiding online media which ignore hate speech and were advertising their products and services elsewhere.

IWPR and its partners worked closely with editors and journalists from 20 online media outlets who monitored reader comments over a six-month period, removing those that contained hate speech and banning repeat offenders. A number of users were reported to the police because their comments were particularly dangerous.

At the December 12 conference in the town of Konjic near Sarajevo, editors and journalists from a dozen participating portals shared their experiences of the campaign.

Angelina Albijanic-Durakovic, director of Depo.ba from Sarajevo, said that at first she had been very sceptical about her outlet’s chances to control hate speech online.

“We are a small portal with just a few employees, so regular monitoring of reader comments seemed like a daunting task,” she said. “I honestly didn’t think regular moderation would make any difference. But now, six months later, I stand corrected – moderation is the key.”

Jurica Gudelj, editor-in-chief of Dnevnik.ba from Mostar, agreed that “thanks to the continuous and persistent moderation of reader comments, we’ve managed to greatly reduce hate speech on our portal”.

Gudelj disagreed with some claims that outlets could not be held responsible for reader comments, especially on social media accounts.

“I’ll use this metaphor: if the portal is our home, then its social media accounts are its backyard. If you have angry, indecent guests in your backyard, it is your duty to force them to leave your space so that they wouldn’t disturb other guests,” Gudelj said.

“Even just the fact that someone is moderating comments has a positive influence on readers,” he continued. “In the past, we used to block comments altogether, but now we feel that we can control and moderate them successfully.”

Milan Šutalo, the editor-in-chief of Hrvatski medijski servis (hms.ba) from Mostar, said that his portal was pre-moderating all comments before they were posted.

“We don’t have the resources to allocate one person to moderating comments alone, so for us the safest option is to pre-moderate comments and post them within an hour or two hours of being sent to us,” Šutalo explained.

“In our view, this is much better than publishing everything the readers send immediately, because, without proper moderation, we would expose ourselves to possible lawsuits.”

He emphasised that owners of media outlets must ensure that the ethical standards of journalism were upheld.

“Our position is that a media outlet is responsible for its entire content, including reader comments, regardless of its capacity - or lack thereof - to moderate them. We cannot hide behind the freedom of speech and the freedom of internet – we have responsibility to protect our media space from hate speech and other inappropriate comments,” Šutalo concluded.

The Stop! Hate Speech campaign is supported by the Bosnia-Herzegovina Resilience Initiative (BHRI), funded by USAID and implemented by the International Organisation for Migration (IOM).

Bosnia and Herzegovina
Broadcast, Journalism, Media
Connect with us