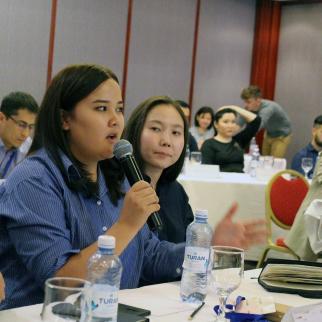 Thirty participants gathered in Almaty, Kazakhstan on November 12-16, for a six-day intense seminar aimed at widening the scope of tools and information of CABAR.Asia’s contributors. Academics, analysts, experts and editors, from across the region, as well Ukraine and Russia, discussed Information wars and world powers’ influence on Central Asia, data analysis and artificial intelligence, populism and hate speech. © CABAR

Four graduates of IWPR’s Central Asia Bureau for Analytical Reporting (CABAR.Asia) had the opportunity to build cross-border ties and share best practice during a two-week study visit to Georgia in which they met senior government and civil society representatives.

The June trip was organised in partnership with CABAR.Asia and the Georgian Foundation for Strategic and International Studies (GFSIS) in Tbilisi and in coordination with IWPR’s regional South Caucasus office.

Established in 1998, the GFSIS, also known as the Rondeli Foundation after the institution’s founder Alexander Rondeli, is an independent non-profit policy think tank that aims to contribute to the country’s public policy decision-making to promote democracy and strengthen regional cooperation.

CABAR.Asia focuses on strengthening human capital, deepening the knowledge in the field of political, security and socio-economic analysis as well as fostering cross-border relations in the region and beyond.

The four analysts – hailing from Kazakstan, Kyrgyzstan, Tajikistan and Uzbekistan – enjoyed an intense programme of seminars, lectures and visits that allowed participants to engage with the institution’s researchers and analysts, who include former high-ranking government officials.

“There is a lot to learn from Georgia."

With the supervision of Nargiza Muratalieva, CABAR.Asia’s editor, developed personal research project under the mentorship of researchers at the Rondeli Foundation, which were illustrated at the end of the trip.

During the visit, the group - graduates of CABAR.Asia’s fourth School of Analytics - also visited parliament and the ministry of foreign affairs, meeting deputies and diplomats.

Asylgul Kanatbekova, the participant from Kyrgyzstan, noted that “there is a lot to learn from Georgia, especially in terms of building a transparent public administration system,” while Farrukh Khakimov, from Uzbekistan, said that he had benefited from being able “to study in more detail the methods and modern technologies that are used by Georgian analytical centres to collect and analyse information”.

Freedom of expression and disinformation were at the centre of a series of meetings with civil society representatives, including Paata Gaprindashvili, director of Georgia’s Reform Associates (GRASS), a non-governmental policy watchdog, and Zura Vardiashvili, founding director of the independent media outlet Publika.

“Civil society in Georgia is an important phenomenon. It’s therefore necessary to work on the promotion of joint projects in this particular area involving civil society, think tanks, research. We have a lot to share with each other,” said Kamila Smagulova, an analyst from Kazakhtan.

The organisations that participants interacted with included the Caucasus Institute for Peace, Democracy and Development (CIPDD), the Georgian Institute for Strategic Studies (GISS), and the Economic Policy Research Centre (EPRC).

“We can follow the path of Georgia, a country that is under Russian oppression, and build real independence, creating a regional organisation without the participation of large players, [to] strengthen the sovereignty of each Central Asian country.”