Analysts discuss the tense situation around Nagorny Karabakh following a meeting between their two countries´ presidents.

Analysts discuss the tense situation around Nagorny Karabakh following a meeting between their two countries´ presidents. 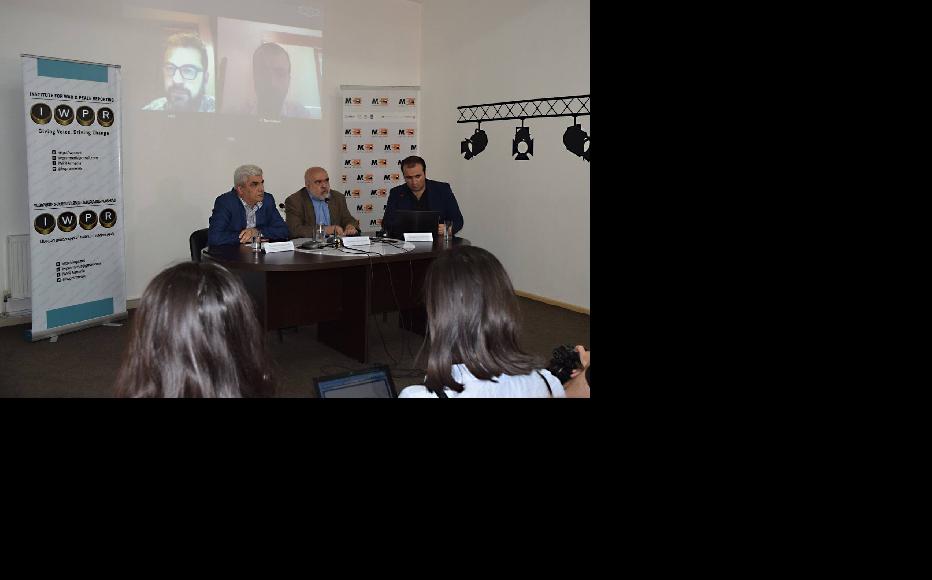 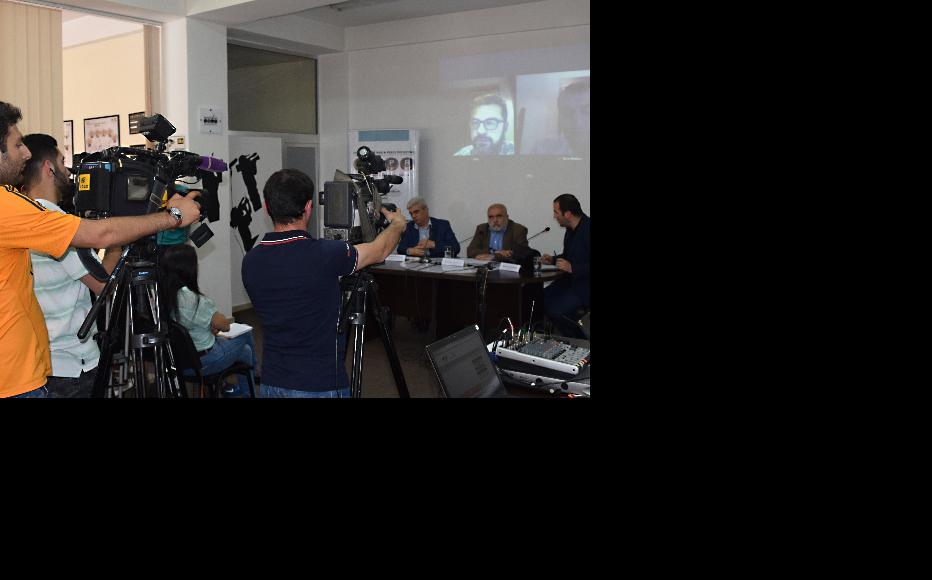 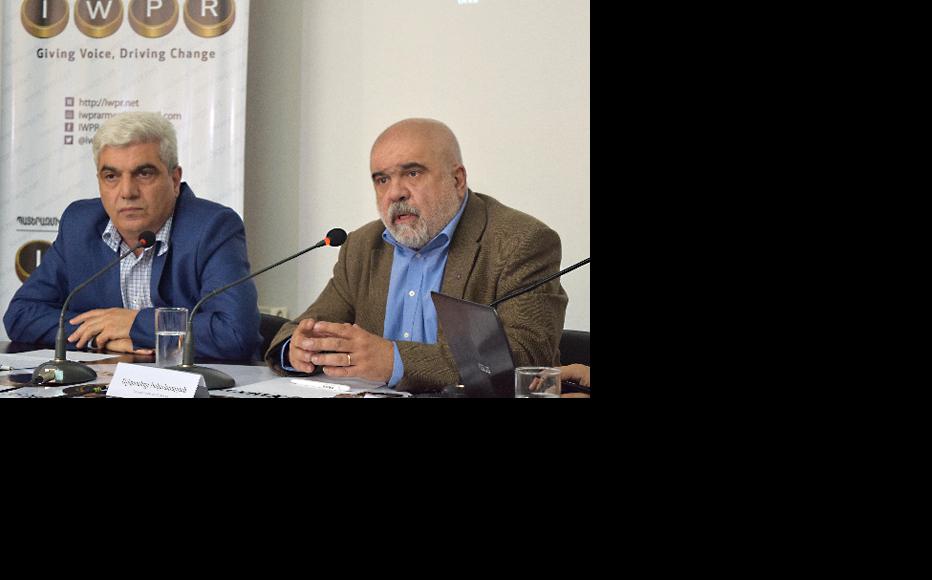 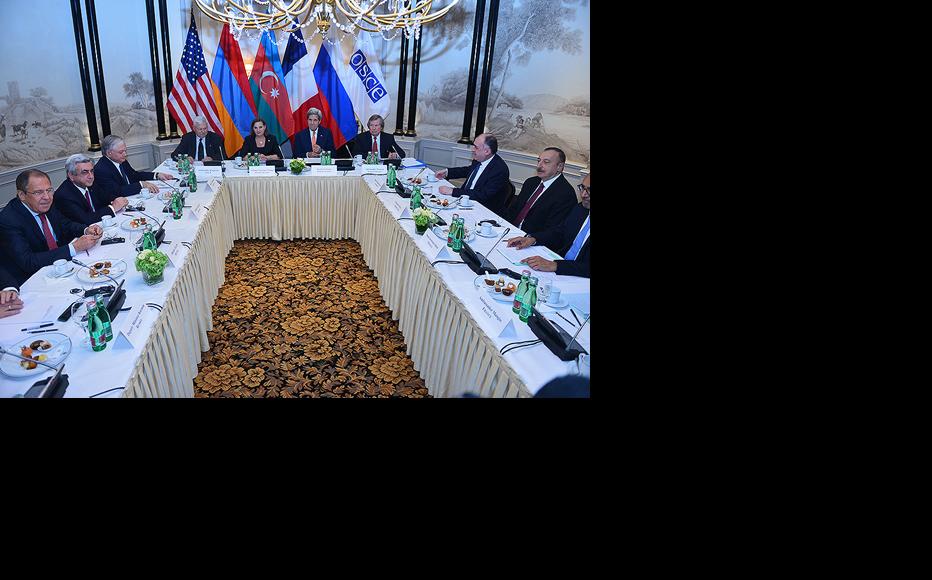 President Sargsyan and President Aliev took part in the discussions initiated in Vienna by the OSCE Minsk Group (Photo: President of Armenia/official)
The link has been copied

IWPR Caucasus has provided a rare opportunity for public debate Armenian and Azerbaijani experts on Nagorny Karabakh with an event held via video link between Baku and Yerevan.

Such exchanges usually only take place in third countries, but the event meant that local journalists from more than a dozen news outlets had a chance to hear the diverse points-of-view for themselves on May 17.

The four-day war in early April between Azerbaijani and Armenian-backed Karabakh armed forces left close to 200 people dead on both sides, including civilians.  It was the largest outbreak of violence since the 1994 ceasefire. Although a new Moscow-brokered truce was reached, the situation on the contact line remains fragile.

Following these clashes, the presidents of Armenia and Azerbaijan, Serzh Sargsyan and Ilham Aliyev, met on May 16 in Vienna to discuss the Karabakh situation.  They agreed to respect the new ceasefire and to resume political dialogue over the future of the disputed region.

IWPR Caucasus and with the Public Journalism Club in Yerevan organised the video forum the day after, on May 17, to discuss the presidential meeting and its implications.

Yerevan-based Alexander Iskandaryan, director of the Caucasus Institute, said the meeting of the two presidents marked a revival of negotiations.

“This is to prevent the risk of new violations and to establish mechanisms of trust. It is better to speak than to shoot,” he said.  “Of course, it is hard to speak about trust in the case of Armenia and Azerbaijan.  There is no trust at all.”

Stepan Grigoryan, chairman of the board of the Analytical Centre on Globalisation and Regional Cooperation (ACGRC), said that Baku was dissatisfied with the status quo and the state of negotiations.

“I am surprised that the presidents met only after these bloody events and expressed some positive ideas. Couldn’t they do it earlier and avoid so many victims?” he asked.

Grigoryan also questioned why there was no agreement about the withdrawal of the snipers from the contact line.

“I don’t understand why Azerbaijan should withdraw its snipers, if its territories are occupied,” responded Nijat Melikov, press secretary of the Azerbaijan National Committee of Helsinki Citizens Assembly.

“Though some part of society is for a peaceful settlement of the conflict, a significant part is for a military resolution,” he said.

Melikov added that some people were indignant that Azerbaijani authorities and the army did not go all the way and restore territorial integrity.

Both tthe opposition and the authorities agreed that the country had the right to restore its territorial integrity, including by military means, he concluded

He said that the increased violence in Karabakh in early April had been orchestrated to prepare the societies for a peace agreement.

He recalled Russian foreign minister Sergey Lavrov’s announcement that by the end of June Aliyev and Sargsyan would initiate the final procedures of the conflict resolution.

“Lavrov put his reputation on the table. Why did the violations in the Karabakh conflict zone increase just at the beginning of April? I can suppose that the aim was to prepare the societies for a peaceful agreement,” Rzayev said.

Though some participants hoped that the Vienna agreements would be implemented, others did not share their optimism.

Iskandaryan said he was suspicious about the “Vienna bargain,” adding that trust-building mechanisms would not be useful as Azerbaijan had a rational “demand to shoot”.

“I would be happy to agree with Shahin, but politicians say one thing, think another thing and do the third.  This is their job.  And, imagine, all of a sudden there was a reason for the conflict to be quickly resolved, and this trend of the last 22 years evaporates because Lavrov for the umpteenth time puts down his authority – this is difficult for me,” Iskandaryan said.

Iskandaryan also warned that the level of violence had increased over the last eight to nine years.

The discussion turned to the Madrid Principles, one of the proposed peace settlements of the Nagorny Karabakh conflict suggested by the OSCE Minsk Group in 2007 and was updated in 2009.

Grigoryan stressed that the Madrid Principles laid the ground for a settlement and included no information about the occupation of Karabakh.

“I am surprised that both the authorities of Azerbaijan and the representatives of civil society take only one principle out of six principles and 14 steps of the Madrid document and consider that the most important. If you remember, there is an issue about the status of Karabakh, about the refugees, the Peace Corps. We have never said that there is nothing about the territories, but you designate one point out of the context,” he said.

“If Azerbaijan does not shoot and everything is quiet and peaceful on board, the conflict will be forgotten. Shooting reminds you of the conflict. It is the only way for Baku to influence the procedure. And it is not clear why Baku should abandon this tool at once,” Iskandaryan said.

“Even if Armenians and the Azerbaijans do not like each other, they should try to settle the conflict through negotiations. There is no other Armenia for Azerbaijan and no other Azerbaijan for Armenia,” he said.

IWPR closely monitored developments on the frontline in April and May and published a series of articles in its Global Voices section written by reporters from Azerbaijan, Armenia, Nagorny Karabakh and Georgia. They gave insights into the conflict and highlight the concerns of the population in the region.  The materials are available at https://goo.gl/8zw8oH.