Aspiring parliamentarians forced to struggle against widespread resistance to women in politics.

Aspiring parliamentarians forced to struggle against widespread resistance to women in politics. 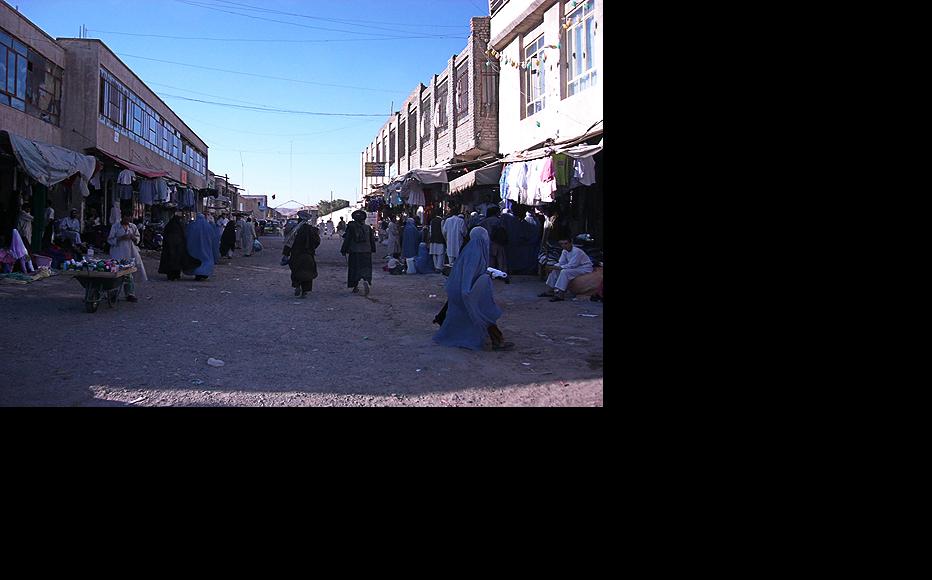 Women at the clothes bazaar in Herat. (Photo: Sven Dirks/Flickr)
The link has been copied

Women candidates in Herat province complain that intimidation, misogynistic attitudes, and lack of funding are hampering their campaigns for the September 18 parliamentary election.

“I wish I hadn’t nominated myself,” said aspiring lawmaker Nahid Ahmadi Farid, explaining that as with many other female hopefuls, her campaign posters had been torn down or sprayed with paint by those who oppose women’s participation in politics.

“Our religion, the Koran and our Prophet have given women the right to participate in public life, but the chronically fundamentalist vision of our people has weakened the role of women,” she said.

Farid gave the example of a mullah in a village in the Korokh district of Herat province, who she said “announced that anyone who votes for women is to be considered an infidel. Since people believe what the mullah says, they think this is true”.

Accusing government security agencies of failing to do enough to stem the attacks on election posters, she said, “It happens at night, and it’s the work of the security forces to arrest the perpetrators.”

The press office of police headquarters in Herat said four people had recently been arrested for tearing down pictures of candidates.

A quota system guarantees that 68 of the 249 seats in Afghanistan’s parliament must go to women. In Herat, 25 of the 153 candidates running for the province’s 17 seats, five of which are set aside for women.

Saadat Fatahi, a member of parliament for Herat who is running for re-election, said women could take more than this quota of five seats if they got enough votes.

Candidates say deep rooted beliefs among the wider population mean that many people are opposed to women working outside the home. Some members of the religious establishment also believe female participation in politics is against Islamic law.

“Women’s entry into politics and elections is neither religious nor acceptable in Afghanistan,” said one mullah, Faiz Mohammad, warning that it was anti-Islamic for women candidates to hand out colour pictures of themselves in full makeup.

“Those who do not vote for women are doing the right thing,” he added.

Such attitudes can be found among women as well as men.

“In the last election, I voted for someone who was suggested to me by my father,” said Zahra Gol, 20. “I’m going to vote for someone whom my father decides on, because men have more knowledge and understanding than women. Besides, they have seen more good and bad experiences in life. Whatever they decide will be to our benefit. The decision taken by the men in our family is more important than my own decision.”

But others argue that there is nothing in Islam that excludes women from the political sphere.

Fereshta, a veiled 22-year-old from a religious family, said those who opposed female politicians were not well enough informed about Islam.

“Together with all my sisters and my mother, I have decided to vote for a female candidate who is acceptable for us, because the men know nothing except bribery, corruption and tribalism,” she said.

Social and political affairs analyst Mohammad Naser Kabiri says there are numerous factors that place women at a disadvantage in Afghan politics.

“The presence of women in these areas is still a new thing, because they were only given a chance to participate in political and state matters after the Taleban regime,” he explained. “Men see women as secondary beings. Such individuals prevent their families and relatives from voting for women. They force their families and relatives to vote for the person they have chosen.”

Such attitudes were most prevalent in rural areas, he explained, adding that corruption also played a part.

This view was backed up by another analyst, Mohammad Khaled Daqiq.

“Women don’t have enough money,” he said. “They don’t have many vehicles in which they can travel to distant parts of the city. All in all, women aren’t able to do proper campaigning and show what they’re capable of. That means a large number of capable women don’t make it into the legislature and other national.”

The media had a significant role to play in addressing this imbalance, he added.

“The media are important in this regard, to inform the public about the importance of a female presence in the social and political arenas. The media can tell people that women too can defend their rights,” he said.

Soraya Daqiqi, head of the women’s section of the Human Rights Commission in Herat, said her organisation had offered advice to female candidates who had run into problems.

Wakil Ahmad Sediqi, a representative of the provincial election commission in Herat, said his organisation had also been making efforts to support female candidates.

While accepting that women faced some challenges in the political arena, he maintained that the situation was improving.

“Women should not lose heart,” he said. “Those women who are already in parliament won elections with the popular vote, and other women will now get into parliament as well.

“I believe the problem of mistrust in women has decreased after many years, and the problem is slowly being solved in Herat,” he said.

According to Sediqi, the provincial election commission is conducting awareness-raising exercises in which “two men and two women [per district] are responsible for disseminating information about the candidates. They also talk about the abilities and capacity of the women.”

Shahnaz Hemati, a female member of parliament running for a second time, was also upbeat, stressing she believed it was possible for more women to win power.

“More women in the parliament can thus do more for society and better defend the rights of deprived men and women, because they are more honest then men and are far removed from corruption and bribery,” she said.

Hemati said lack of funds and the difficulty of travelling to remote locations to campaign were obstacles for women. In some places, she said, female candidates were simply not welcome.

“Women for sure have more ability, mental power, knowledge and honesty than men,” she said. “If women had the economic opportunities that men have at their disposal, they would definitely win more votes than men.”

Mohammad Shafi Ferozi is an IWPR trainee reporter in Herat.