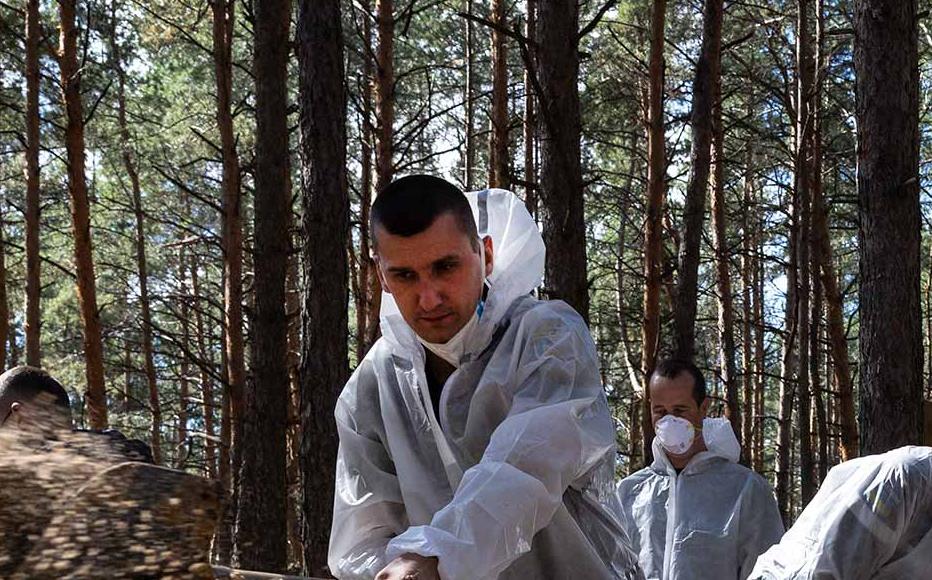 Rescue workers and forensic police exhume bodies from unidentified makeshift graves at the Pishanske cemetery on September 19, 2022 in Izium, Ukraine. The bodies will be examined by forensic officials for possible war crimes. Izium was recently liberated from Russian occupation after six months. Approximately 440 bodies are buried at the cemetery, so far 161 bodies have been exhumed, taken to the morgue in Kharkiv. © Paula Bronstein/Getty Images
Interview

Rescue workers and forensic police exhume bodies from unidentified makeshift graves at the Pishanske cemetery on September 19, 2022 in Izium, Ukraine. The bodies will be examined by forensic officials for possible war crimes. Izium was recently liberated from Russian occupation after six months. Approximately 440 bodies are buried at the cemetery, so far 161 bodies have been exhumed, taken to the morgue in Kharkiv. © Paula Bronstein/Getty Images
The link has been copied 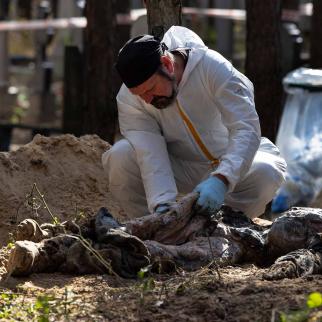 Rescue and forensic police examine bodies from unidentified makeshift graves at the Pishanske cemetery on September 19, 2022 in Izium, Ukraine. The bodies will be examined by forensic officials for possible war crimes. Izium was recently liberated from Russian occupation after six months. Approximately 440 bodies are buried at the cemetery, so far 161 bodies have been exhumed, taken to the morgue in Kharkiv. © Paula Bronstein /Getty Images

Mykola Pashkovsky is a member of the Ukrainian Association of International Law and associate professor at the National Academy of Law Sciences of Ukraine’s Institute for the Study of Crime. He explained to IWPR the issues over universal criminal jurisdiction in Ukraine.

IWPR: What is the principle of universal criminal jurisdiction and where does it originate from?

Mykola Pashkovsky: Criminal law developed rapidly in the mid-1800s and considered that the fight against crime was not just a state’s task but one for the entire international community. This is because a crime committed in one state potentially threatens law and order in any other state. Back then, it was piracy. Regardless of their nationality, where they were detained, or who owned the ship, any state could begin a trial over them. Later, the principle of universal criminal jurisdiction began to be applied to cases of slave trade.

The principle of universal criminal jurisdiction was formalised after World War II for crimes of aggression, genocide, war crimes and crimes against humanity.  It has been recognised in the 1949 Geneva Conventions, which define the rules of war. The conventions provide the right to any state to bring to criminal responsibility any person, regardless of their citizenship or the place of the crime, for committing crimes under international law.

Is this legal principle included in the criminal code of Ukraine?

Today, 147 countries have incorporated universal jurisdiction in their criminal codes, and Ukraine is among them. This, in particular, is confirmed by research of Amnesty International.  Part 1 of Article 8 in the criminal code of Ukraine recites that “foreigners or stateless persons who do not permanently reside in Ukraine, who have committed criminal offences outside its borders, are subject to liability in Ukraine under this Code in cases stipulated by international treaties”. Still, the problem lies in interpreting the phrase "in the cases stipulated by international treaties" - which treaties, what exactly are the state’s obligations?

The prosecutor general's office already lists about 41,000 war crimes reported in Ukraine. Not all, however, can be prosecuted by Ukraine, because not all are listed in the Geneva Conventions. Therefore, it is problematic for Ukraine to prosecute all war crimes on the basis of the existing norm of universal criminal jurisdiction in the criminal code of Ukraine. These include, for example, using people as human shields, sexual violence as an independent crime, crimes against cultural objects, crimes against humanitarian missions like shelling evacuation buses. They are not yet criminalised in Ukraine.

There are four Geneva Conventions that protect victims of war. Each of these conventions provides for the duty of the participating states to prosecute persons who are guilty of gross violations of these conventions, regardless of where the crimes were committed. For now, Ukraine can prosecute such war crimes as wilful killing, torture or inhuman treatment, including biological experiments, wilfully causing great suffering or serious injury to body or health, unlawful deportation, taking of hostages and so on.

What has Ukraine done to improve its implementation of universal criminal jurisdiction in its code?

A draft law submitted during Petro Poroshenko’s presidency aimed at extending universal criminal jurisdiction to the crime of aggression, crimes against humanity, war crimes and genocide.

The relevant draft law 9438 was submitted to the Ukrainian parliament in December 2018 and was adopted in the first reading in June 2019. Then in July 2019, parliamentary elections were held and a new Verkhovna Rada [Ukrainian parliament] was elected. Accordingly, all draft laws introduced in the previous assembly were annulled.

In December 2019 a new bill, the 2689, was introduced and included the universal criminal jurisdiction provision. There was an interesting point: universal criminal jurisdiction over war crimes could be implemented only in those cases when the relevant persons were on the territory of Ukraine. That means that Ukraine could start criminal proceedings only against foreigners or stateless persons in the territory of Ukraine. On the one hand, this makes the principle more efficient; however, some time passes between when the investigation begins and when an individual is pronounced as suspect of having committed a crime. It means that in that window of time the suspect can leave the territory of Ukraine

The Verkhovna Rada approved it on May 2020, but the bill is still pending presidential sign off.

Why does it take so long?

There are fears that when criminal legislation changes, if transitional provisions are unsuccessfully prescribed, some of the crimes committed by the Russian military may be decriminalised. There is a danger that some people who committed these war crimes may stay unpunished. It takes a lot of work to prevent this from happening.

What do international partners think of this delay?

It is a question of reputation. Ukraine is trying to get support in investigations from European states. And they can say, why don't you develop the institution of universal criminal jurisdiction but try to get help from us? Germany, Spain, Lithuania and Sweden have opened proceedings regarding the possible commission of war crimes on the territory of Ukraine, based on universal criminal jurisdiction. They are expecting the same from Ukraine.

Ukraine’s legal community is trying to put public pressure on the prosecutor general’s office, the president’s office and the government to move forward. There is an added problem because the deadline for the president’s sign off has expired, according to Ukraine’s law. The Rada will need to start the approval process again.

Is there an example of how Ukraine can use universal criminal jurisdiction now?

In March this year, a Russian air force pilot shot down by the Ukrainian armed forces was detained. He turned out to have committed war crimes against civilians in Syria while serving with the Russian military. He can then be prosecuted not only for war crimes committed in Ukraine but also for war crimes committed on the territory of Syria. To do this, Ukraine needs to make the norm of Universal Criminal Jurisdiction more effective.