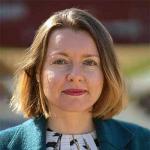 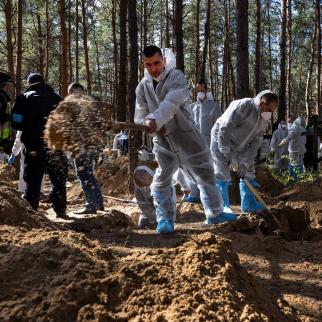 Rescue workers and forensic police exhume bodies from unidentified makeshift graves at the Pishanske cemetery on September 19, 2022 in Izium, Ukraine. The bodies will be examined by forensic officials for possible war crimes. Izium was recently liberated from Russian occupation after six months. Approximately 440 bodies are buried at the cemetery, so far 161 bodies have been exhumed, taken to the morgue in Kharkiv. © Paula Bronstein/Getty Images 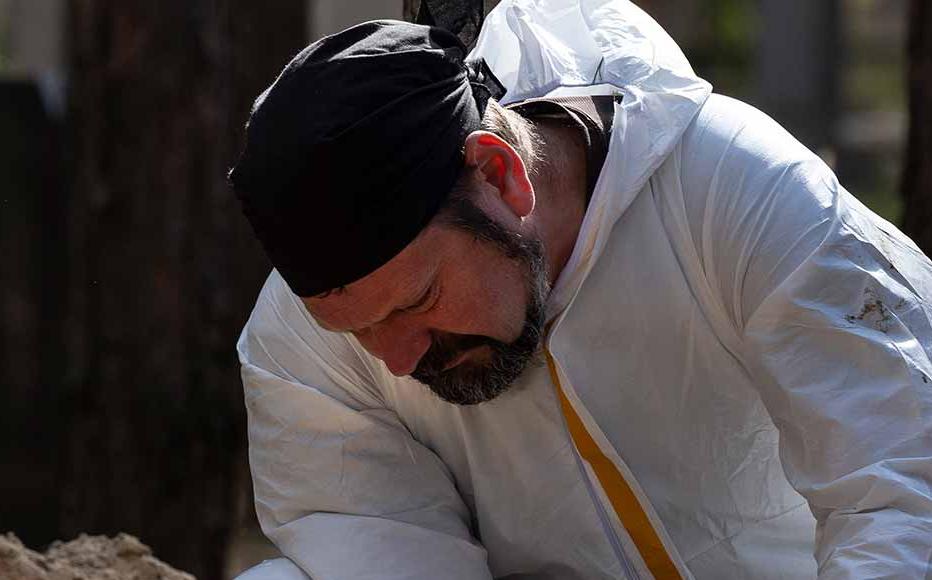 Rescue and forensic police examine bodies from unidentified makeshift graves at the Pishanske cemetery on September 19, 2022 in Izium, Ukraine. The bodies will be examined by forensic officials for possible war crimes. Izium was recently liberated from Russian occupation after six months. Approximately 440 bodies are buried at the cemetery, so far 161 bodies have been exhumed, taken to the morgue in Kharkiv. © Paula Bronstein /Getty Images
The link has been copied

Russia’s full-scale invasion of Ukraine poses a significant challenge to the functioning of Ukraine’s judicial system.

The foremost among them is the physical security of those involved in justice processes as well as the targeting and destruction of court buildings. It is for this reason that courts located in areas occupied by Russian armed forces or experiencing active hostilities have ceased operations. Within the first month of the war, some 20 per cent of the country’s courts had closed. Parliament adopted a law allowing the transfer of jurisdiction to courts located in relatively safe regions.

Some courts such as those in the Chernihiv, Kyiv and parts of Sumy regions have renewed their work since the liberation of these territories in April 2022. More recently, certain courts in the Kharkiv region in the east of Ukraine began functioning again, in some cases hindered by damage inflicted by hostilities. According to the chairman of the supreme court of Ukraine, about 70 such buildings in Ukraine were damaged or destroyed as of mid-July 2022. The fact that some court personnel have left the area in search of safety or to fight in the war may pose another challenge to the resumption of work.

Access to case materials presents a further challenge, especially in areas under occupation by Russian forces and in instances of the destruction of court premises as a result of hostilities.

Ukrainian courts have already faced this issue since 2014 in the context of case materials located in illegally annexed Crimea and in areas outside governmental control in the east of Ukraine. Ukrainian courts’ failure to examine cases because of lack of access to materials has been challenged by the affected individuals before the European Court of Human Rights (ECHR). In a leading case on the issue called Khlebik v Ukraine, the ECHR found that the delays resulted from circumstances outside the control of the Ukrainian authorities, which took all reasonable measures available to them to mitigate adverse consequences.

Although Ukrainian legislation envisages a procedure for the renewal of cases with lost files, it may not always be possible to do so in practice. This and other war-related safety concerns may be addressed by the increased digitalisation of Ukrainian courts. In the past several years, Ukraine has been working on the introduction of the Unified Judicial Information and Telecommunication System (UJITS), which envisages virtual court proceedings, electronic submission and storage of documents and evidence and digital workflows. The war and resultant threats to the physical security of judges, court personnel and participants who may be reluctant to travel to and appear in court in person because of active hostilities or risk of airstrikes has highlighted the need for the effective implementation of the UJITS.

Even while affected and partly disabled by the war, the Ukrainian justice system continues functioning. One important task that it faces now is prosecuting war crimes committed since the start of Russia’s full-scale invasion of Ukraine in February 2022. The courts in Ukraine have already delivered their first convictions for war crimes committed by Russian soldiers. In May, a Russian soldier was found guilty of killing a civilian in the Sumy region and two others were convicted of indiscriminate attacks on civilian areas in the Kharkiv region. Guilty verdicts for an attack on a civilian building and pillaging in the Chernihiv region followed. A case related to charges of murder and rape of civilians in the Kyiv region is pending examination.

These cases are only the tip of the iceberg. As of September 15, 2022, about 32,500 allegations of war crimes have been officially registered in Ukraine. The difficulty of prosecuting these crimes lies not only in their very large number and widespread character. Expertise in international humanitarian law – the area regulating means and methods of war and treatment of civilians and other protected persons – is required.

It must be noted that the Criminal Code of Ukraine (CCU) contains no provisions on specific war crimes. All such cases are prosecuted under one and the same general provision criminalising conduct constituting violation of the laws and customs of war. Supplementing the CCU with a set of detailed norms on specific war crimes, as has already been attempted by the Ukrainian parliament in 2021, would bring more certainty into the prosecution of war crimes, and provide judges with a better tool for trying them.

International assistance to the Ukrainian justice system, for instance in the form of knowledge sharing or the involvement of experts on the ground, is crucial in improving expertise in prosecuting war crimes.

In this connection, the creation of the Eurojust joint investigation team and the support of such initiatives as the atrocity crimes advisory group set up to assist war crime units within the office of the prosecutor general of Ukraine, and the legal task force on accountability is welcome.

Finally, although Ukraine had long struggled with maintaining an independent judiciary, significant advancements have been made in the past decade. In its opinion on Ukraine’s application for EU membership on June 17, 2022, the European Commission noted the key anti-corruption reforms and the strengthening of judicial independence in Ukraine in recent years.

It is of outmost importance that Ukraine maintains these gains and guarantees the integrity and independence of its judiciary. The legitimacy of Ukraine’s effort to ensure accountability for war crimes committed during the Russian aggression hinges on the ability of its justice system to ensure fair and independent trials.

Gaiane Nuridzhanian is associate professor at the National University of Kyiv-Mohyla Academy and a postdoctoral research fellow at UiT the Arctic University of Norway.