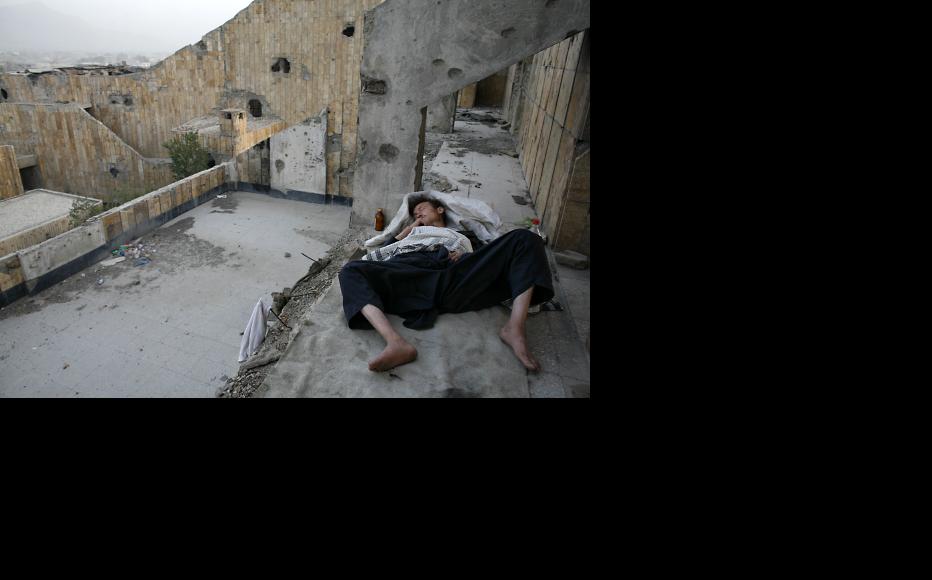 A homeless heroin addict sleeps outside on the ledge of an abandoned building in Kabul. (Photo: Paula Bronstein/Getty Images)
The link has been copied

Addiction rates in Afghanistan are being fuelled by high rates of unemployment, according to speakers at IWPR debates held in three different provinces this month.

Events in Uruzgan, Farah and Nuristan discussed the reasons behind Afghanistan’s ongoing drug problem. The country is the world’s top producer of opium and its refined product, heroin, and both are widely available and inexpensive.

The discussions took place in the second week of November 2015 in the Chora district of Urozgan province, Farah, the main town of the western province of the same time, and Parun, the administrative centre of Nuristan in the east.

In Uruzgan in central Afghanistan, the head of a youth association in Chora district, Amanullah Ghamkhor, said opium poppy cultivation there was very low, but many young people, and some older ones too, were using drugs. Ghamkhor said poverty was at the root of drug use, and called on central government to create jobs by setting up infrastructure projects.

Omari said the government had failed to deliver on pledges to invest in areas that curbed narcotics production.

“Central government made many promises to Chora district on condition that it prevented poppy cultivation, but those promises haven’t been fulfilled yet,” he said.

In contrast, the debate in Farah heard that poppy cultivation as well as drug addiction had risen.

Abdulwudud Anwari, head of Farah’s drug rehabilitation centre, said, “The number of addicts in Farah province reaches into the tens of thousands, and grows larger with every passing day.”

Anwari said his 100-bed clinic was the only facility providing addiction treatment in the entire province, and this was woefully inadequate for the scale of the need.

Faqirgul Amini, head of counter-narcotics at Farah police headquarters, said his officers had made every effort to destroy poppy fields and arrest dealers and smugglers.

Amini said Farah’s location near Iran made it a prime route for taking heroin westward, so “external forces” supported the insurgents in a bid to weaken government control to allow cultivation and smuggling to carry on.

Farah provincial councilor Dadullah Qani accused religious leaders of failing to speak out about the Islamic prohibition on using and growing narcotics. He said that in parts of Farah not under government control, local clerics collected “ushr” and “zakat” – religious tithes on produce and income – from poppy farmers.

At a debate held in Nuristan, speakers said rates of drug use were relatively low.

Harun Moahid, the head of the province’s counter-narcotics agency, said that while he did not have precise figures, Nuristan’s drug problem was smaller than that in other parts of Afghanistan.

Raes Khan Wali, acting head of the counter-narcotics police, agreed with the consensus view that poverty was a major factor in drug use.

“If employment opportunities are created for people in this country, the number of drug addicts will be reduced substantially,” he said.

Rizwan, the official in charge of addiction treatment at the provincial health department, explained that medical facilities were limited.

“Addicts who are in a serious condition are sent to the neighbouring province, Nangarhar. In Nuristan, we only treat mild cases,” he said.

Afghan Peace and Reconciliation
Afghanistan
Drugs
Connect with us