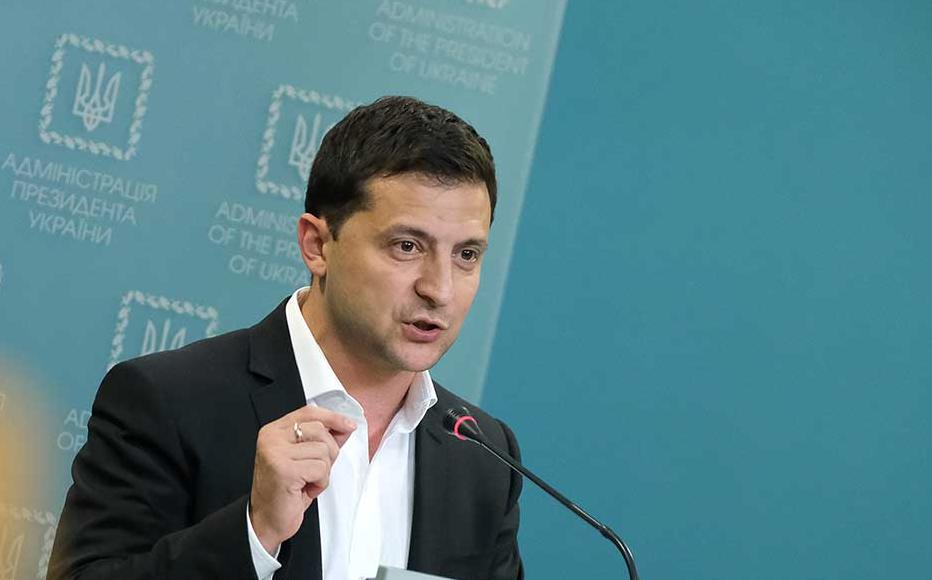 Ukrainian President Volodymyr Zelensky speaks to the media. © Sean Gallup/Getty Images
The link has been copied

The Ukrainian government’s decision to close three pro-Russian television channels has highlighted the ongoing debate on the boundary between freedom of speech and the fight against fake news.

But analysts fear that the legal basis for the dramatic move may have been shaky, warning also of potential retribution from Moscow.

The National Security and Defence Council of Ukraine (NSDC), formally headed by President Volodymyr Zelensky, shut down the channels - 112 Ukraine, NewsOne and ZIK - as part of sanctions imposed on parliamentarian Taras Kozak.

His assets are widely believed to controlled by Viktor Medvedchuk, also a lawmaker with the pro-Russian Opposition Platform - For Life party. Medvedchuk himself is personally strongly associated with Russian president Vladimir Putin, and is said to be the godfather to his daughter.

Zelensky said that the February 2 decision had been “legal, logical, justified and fair,” adding that “it is fully supported by the United States, the European Union and the G7 countries, which clearly see the difference between censorship and the protection of national interests”.

According to a poll by the Rating Group, 49 per cent of respondents approved of Zelensky’s move, with 41 per cent opposed.

The international response was indeed positive, with the US calling the move a “counteraction to the malicious influence of Russia which Ukraine applied in defence of its sovereignty and territorial integrity and in accordance with the Ukrainian law”.

However, the EU foreign policy chief Josep Borrell also warned that Ukraine’s self-defence from disinformation “should not come at the expense of freedom of media and must be done in full respect of fundamental rights and freedoms and following international standards”.

Lyubov Tsibulskaya, the head of hybrid warfare analysis at the Ukraine Crisis Media Centre, said that their own recent experience of Russian tactics had made the international community more sympathetic to Ukraine’s plight. In addition, the storming of Washington’s Capitol by supporters of former president Donald Trump had shown the potential effect of unfettered disinformation.

“We can say that over the past couple of years many leading Western countries experienced Russian interference in their internal affairs, including by means of disinformation,” Tsibulskaya said. “It included interference in the elections processes and lobbying those initiatives which were beneficial for Russia.

“Consequently, the attitude towards the boundaries between freedom of speech and the protection from propaganda has changed. I think that the Capitol attack played a crucial role in that - it showed what consequences propaganda can have if it is not blocked.”

However, it remains likely that the NSDC’s decision will be overturned. Sanctions can only be applied to Ukrainian citizens with links to terrorism. Kozak had been accused of illegal trade in occupied Donbass, and consequently of financing terrorists.

However, no legal actions had been filed before the NSDC move, putting the entire ruling into question.

“It is notable that until now the authorities have not presented any legal grounds for banning the TV channels,” said political analyst Evgen Magda, adding that it seemed the ruling party had hoped their popularity would ensure the success of this action. “This worked well in 2019, when their ratings were high, but now this strategy looks doubtful,” he concluded.

The executive director of the Anti-Corruption Action Centre, Daria Kalenyuk, said that the cancellation of the decision would seriously impact the president’s legitimacy, showing that “the pro-Russian lobby is simply wiping his feet on Zelensky”.

Indeed, at the end of January, For Life’s ratings were 20 per cent, while the ratings for Servant of the People were 11 per cent, lagging behind the parties of former President Petro Poroshenko and ex-premier Yulia Tymoshenko.

The drop in ratings may have spurred Zelensky to change his previously more passive tactics.

First there was the dismissal of Servant of the People lawmaker Alexander Dubinsky - recently sanctioned by the US for alleged interference in the 2016 elections – followed by the decision to ban the pro-Russian TV channels. These were perceived to have helped For Life win back part of the electorate that voted for Zelensky in 2019.

Both moves may have already had a positive effect. February figures showed that the rating of the Servant of the People party increased to 15 per cent, while the support of the For Life party without TV channels fell to 17 per cent.

But analysts warned that, although such decisions may have boosted Zelensky’s popularity in the short term, they were not without risk.

The For Life party has vowed to launch an impeachment process, although in practice this is almost impossible to do. More pressing was the prospect of retribution from Moscow.

“Zelensky’s refusal to fulfill Russian wishes in Donbass has already led to the deterioration of the situation on the front line,” Magda said. “Most likely, the tension will intensify. The shutdown of TV channels, and most importantly, the unwillingness to recognize Medvedchuk’s untouchable status, might even speed up this process.”

Ukraine Voices, Giving Voice, Driving Change - from the Borderland to the Steppes
Ukraine
Disinformation, Sanctions, Media
Connect with us