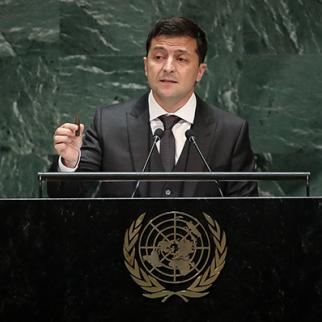 President of Ukraine Volodymyr Zelensky holds up a bullet as he addresses the United Nations General Assembly at UN headquarters on September 25, 2019 in New York City. (Photo: Drew Angerer/Getty Images) 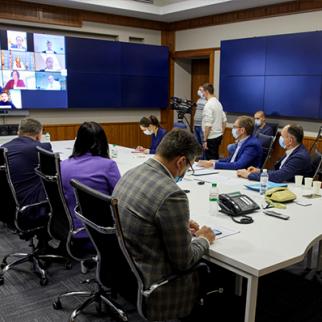 Ukrainian president Volodymyr Zelensky has had to confront an influential figure in his own party after the lawmaker was sanctioned by Washington for alleged intervention in the 2016 US election.

Oleksandr Dubinsky, head of the ruling Servant of the People party’s office in Kyiv, was included in a January 11 list for actions “related to a Russian disinformation network which attempted to interfere in the US elections”.

This put Zelensky in the uncomfortable position of having to challenge one of the most influential figures in his entourage. In addition, Dubinsky has long been associated with a group of politicians loyal to oligarch Igor Kolomoysky, who opposes Zelensky’s trajectory towards EU and NATO integration.

Zelensky has carefully avoided conflict with Kolomoisky, whose influence has grown significantly since the 2019 presidential elections.

Analysts say, however, that the US sanctions left him with little choice but to demonstrate his commitment to his Western allies.

For two weeks, Zelensky took no action, before finally asking Dubinsky to step down during a faction meeting on January 25. The lawmaker refused, arguing that the US claims against him were untrue.

After lengthy debate, the Servant of the People voted to expel him from the parliamentary faction at a February 1 meeting.

In a message on his Telegram channel, Dubinsky said that this decision was “irresponsible, unsubstantiated, immoral, and humiliating towards the country”.

“For the US, this issue has become a litmus test measuring the independence of Volodymyr Zelensky,” said political analyst Galina Zelenko, from the Institute of Political and Ethnic Studies of the National Academy of Ukraine. “Now he has to prove that cooperation with Ukraine’s key ally is more important for him than his political alliances.”

The accusations against Dubinsky first surfaced in May 2020, when independent Ukrainian lawmaker Andriy Derkach published audio materials he had received from investigative journalists he claimed could prove the influence that then-US vice-president Joe Biden had had on the fifth president of Ukraine, Petro Poroshenko.

Dubinsky took an active part in the publication of this material, in particular participating as a speaker at one of Derkach's press conferences.

The recordings followed the 2019 scandal in which Trump was reported to have pressured Zelensky to open an investigation into the Biden family or face having US aid frozen. Derkach was also involved in that case, having negotiated with Trump’s lawyer Rudolph Giuliani and provided him with material.

The US made no comment on the May 2020 recordings, while Poroshenko issued a statement questioning their authenticity and stating that they were just a compilation of several conversations.

However, at the time, Zelensky told reporters, “I believe that this is not the last call which the Ukrainians are going to see... the Prosecutor General of Ukraine registered the criminal investigation yesterday on Derkach’s application, the case is going to be investigated,” the president said.

He was widely criticised for appearing to indicate Kyiv was willing to open a criminal investigation against Biden, as Trump had demanded a year earlier, and the step was never taken.

Then, in September, the US treasury department imposed sanctions against Derkach, describing the release of the recordings as an attempt to influence the American vote.

Online newspaper Ukraynska Pravda reported that Zelensky had previously warned Dubinsky to stay away from Derkach, and following the sanctions against him had asked the lawmaker to resign from the party to avoid further embarrassment. Dubinsky refused and the president had been reluctant to put the issue to a vote.

An early online poll of lawmakers conducted by faction leader David Arahamia showed that most of his colleagues were also reluctant to vote openly for the exclusion of a colleague with a reputation for wielding significant power.

Ukrainian analysts said that the vote for Dubinsky’s exclusion had been the most serious test for the government since last year’s historic vote lifting a long-standing ban on sales of farm land.

“Vladimir Zelensky finally broke the truce with the oligarch Kolomoisky,” Zelenko said. “This truce was comfortable for him, personally, but blocked the development of the country. Now Ukraine will receive both new opportunities and new risks.”

Economist Vasily Yurchishin said that Zelensky had been presented with a clear choice.

“The retention of Alexander Dubinsoky in the presidential faction was no longer just perceived as a potential problem in relations with the US, but already as a rejection of reform and a way of curtailing them,” he continued. “In other words, the private question of an individual deputy suddenly turned into a marker of which path of further development for Ukraine the president and his party would choose.

Giving Voice, Driving Change - from the Borderland to the Steppes
Ukraine
Sanctions
Connect with us