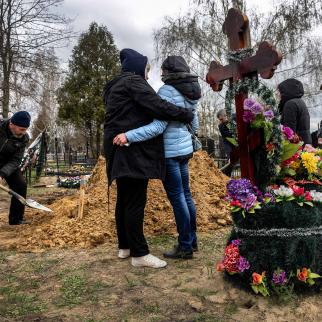 Family members mourn the death of Ruslan Nechyporenko, 47, after his funeral on April 18, 2022 in Bucha, Ukraine. His body was found in Bucha after Russian soldiers withdrew weeks before, one of at least 700 murdered civilians found in towns around Kiev, according to authorities. The slayings launched investigations for possible war crimes perpetuated by Russian forces during the occupation. © John Moore/Getty Images 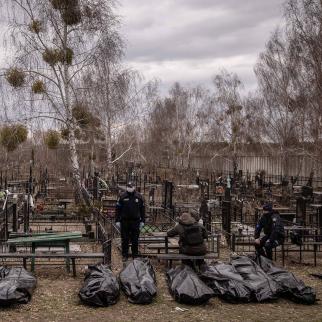 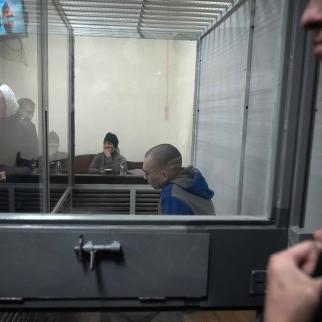 Captured Russian soldier, Sgt. Vadim Shishimarin, 21, attends a court hearing on May 18, 2022 in Kyiv, Ukraine. Sgt. Shishimarin pleaded guilty to shooting a civilian on a bicycle in the village of Chupakhivka, Sumy Region, days after Russia's invasion of Ukraine on Feb. 24. The trial of the Russian soldier was the first that Ukraine has conducted since the invasion related to charges that could be considered war crimes. © Christopher Furlong/Getty Images 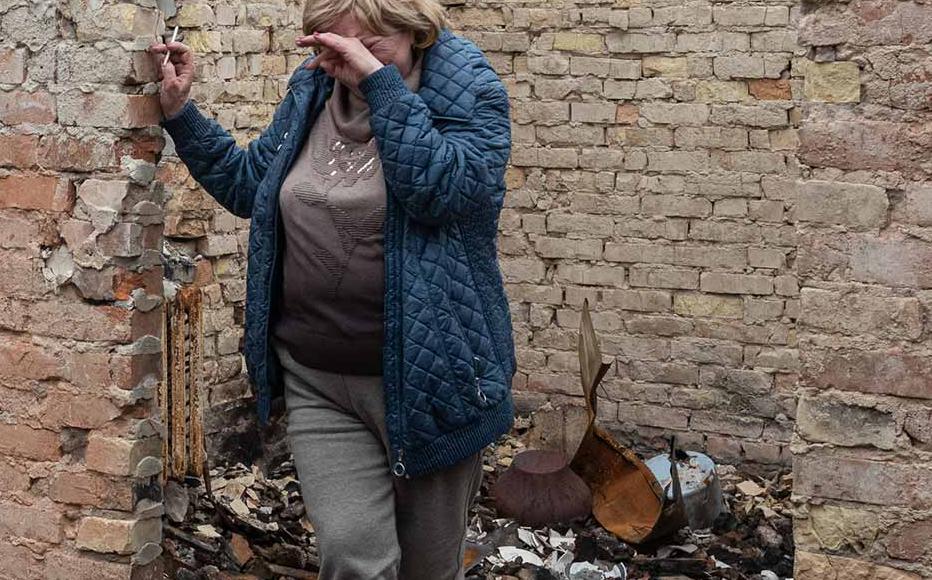 Inna, 53, cries inside her burnt out house on April 25, 2022 in Ozera, Ukraine. The towns around Kyiv are continuing a long road to what they hope is recovery, following weeks of brutal war as Russia made its failed bid to take Ukraine's capital. © Alexey Furman/Getty Images
The link has been copied

Russia’ recent series of strikes on Ukrainian towns and cities far from the frontline has provided yet further evidence of its policy of targeting civilians, according to human rights activists and legal scholars.

Experts point to a series of attacks apparently on civilian targets, such as a July 14 strike in which three Russian Kalibr missiles fired from the Black Sea hit the centre of Vinnytsia. According to the city’s governor, Serhii Borzov, 26 people - including three children - were killed and more than 200 injured. Three weeks earlier, a missile strike that hit a shopping centre in the city of Kremenchuk led to the deaths of at least 20 people, with nearly 60 injured.

Vyacheslav Rajevskyi, a spokesman for the office commander-in-chief of Ukraine’s armed forces, said that such Russian attacks were unequivocally unjustified.

“The basis of conducting hostilities is to obtain a military advantage, not to destroy everything and kill everyone,” he said. “Therefore, if you analyse the cases of the use by Russians of missiles in heavily populated areas of Ukraine - Odesa, Mykolaiv, Dnipro, Kremenchuk - and evaluate somehow the obtained military advantage, then there is none. Therefore, from the classical point of view of international humanitarian law, this is a war crime.”

Oleksandra Romantsova, executive director of the Centre of Civil Liberties, said that it was clear that Moscow was targeting civilians with the intention of damaging Ukrainian morale.

“When we see such massive attacks with missiles on a place full of civilians, like in the middle of the day in the centre of Vinnytsia, it’s one of the ways that the Russian Federation is trying to create terror,” she said. “They are trying to scare people, ordinary civilians, because they try to destroy our resilience and our support of the work of the Ukrainian army. Under international humanitarian law, this is not a legal way to wage war.”

On July 27, the US senate called for the recognition of Russia as a state sponsor of terrorism for its actions in Chechnya, Georgia, Syria and Ukraine, which led to the death of "countless numbers of innocent men, children, and women".

A similar resolution was submitted to congress, although it is the state department that ultimately makes such a decision.

The current US list of state sponsors of terror includes four countries: Syria, Iran, Cuba, and North Korea. Inclusion on this list means the almost complete cessation of diplomatic communication and the introduction of tough sanctions.

“The core principles - the military necessity, distinction, proportionality, and humanity - of IHL characterise the main methods of warfare and lay out that they are not unlimited,” he said. “However, not all violations of these principles are equal. The most serious crimes become grave breaches and are defined as war crimes.”

These, he continued, included acts such as willful killing, torture, or inhuman treatment against protected persons.

“According to a statement from the ministry of defence of Ukraine on July 16, 70 per cent of Russian attacks were against civilian targets, and only 30 per cent were against the military.

“There was no military necessity for the Russian armed forces to target Kramatorsk, Chasiv Yar or Vinnytsia, for example. They should and could distinguish between military and civilian targets. We can define the attack of Russian forces on civilian targets not on the frontline but in central and western parts of Ukraine as grave breaches of IHL. They are absolutely war crimes.”

Yury Usmanov, an expert at the Regional Centre for Human Rights, stressed that Russia had failed to distinguish between military and civilian targets from the very start of the full-scale invasion.

“First of all, it is worth saying that not only the recent rush of mass missile strikes on Ukrainian cities [such as] Kremenchuk and Vinnytsia, but all other attacks by the armed forces of the Russian Federation on civilian objects and civilians will be a violation of international law,” he said. “Failure to comply with the distinction between military objectives and civilian objects, combatants, and civilians is a serious violation of IHL… Secondly, such illegal actions of the military-political leadership and the military of the Russian Federation are qualified as war crimes by the provisions of IHL and the Rome Statute of the International Criminal Court.”

Rajevskyi stressed that, even amidst ongoing hostilities, Ukraine’s legal system was ensuring that evidence would be available for future justice processes.

“It is very gratifying that recently in Ukraine much work is ongoing to create a whole system of documenting war crimes committed by the Russian Federation on the territory of Ukraine,” he concluded.

Romantsova, from the Centre of Civil Liberties, said that civil society was playing a crucial part.

“We, as human rights defenders, document Russian war crimes and store these attacks in our database,” she said. “We collect evidence to support the understanding that [Russia’s] motivation was terrorism.”

Usmanov also said that he felt confident that justice would be served for crimes committed in Ukraine.

“All individuals involved, who commit such crimes, will sooner or later be brought to [justice] in the International Criminal Court and national courts within the limits of universal jurisdiction, because there is no statute of limitations for such crimes,” Usmanov continued. “Right now the prosecution of all persons involved in the commission of all atrocities during the armed conflict on the territory of Ukraine is a crucial task for our state and the entire international community.”