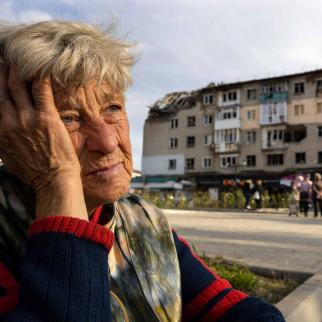 Galina Ivanenko, 77, sits in the central square on September 20, 2022 in Izium, Ukraine. She never left the city because she was taking care of handicapped family members. Izium was occupied by Russians since April 1st causing major destruction and death to the small city. © Paula Bronstein /Getty Images

Members of a special unit tasked with reconnaissance and sabotage imprisoned and interrogated Ukrainian civilians in September 2022.

Justice ministers from around the world are set to convene in London in March to support the International Criminal Court (ICC) investigation of war crimes in Ukraine, the British ministry of justice announced on January 7.

ICC prosecutor Karim Khan KC will brief the event on the court’s work and the role of the international community in supporting its investigations.

The meeting will also increase the global financial and practical support being offered to the ICC and coordinate efforts to ensure it can prosecute those responsible for war crimes in Ukraine, the official statement read.

The Hague City Council has also favoured an initiative to host a special tribunal to prosecute Russia.

Ukraine has filed five lawsuits against the Russian Federation to the ECtHR, including one case concerning the full-scale invasion, the official said. However, as Russia has left the Council of Europe and the Convention on Human Rights it has no duty to comply with court decisions adopted after its exit. In these circumstances, Mydra said, Ukraine considers an ECHR decision a political tool that could be used to monetise decisions on compensation for damages caused by Russian aggression.

Meanwhile, Prime Minister Denys Shmyhal announced that Russia had inflicted more than 700 billion US dollars of damages on Ukraine since the start of the full-scale invasion.

He reported that Ukrainian law enforcement officers had found more than 920 bodies of civilians in the liberated territories  - including 25 children - killed as a result of the Russian military invasion.

Of this number, 656 have been identified.

The official photos of war crimes documentations are here and here.

Meanwhile, Ukrainian law enforcement officers established the identities of three Russian soldiers who participated in the kidnapping and torture of civilians in the temporarily captured districts of the Zaporizhzhia region.

Ukrainian law enforcement officers have identified ten Russian soldiers suspected of killing 13 civilians and injuring six as they attempted to prevent people from fleeing the Kyiv region in spring 2022.

Two battalion tactical groups from the 5th separate tank brigade of the Russian Federation were among the first to enter the territory of Ukraine from Belarus. On March 3, they went to the Zhytomyr road near Kyiv city. One group took up a position in the village of Berezivka, the second at a gas station near the village of Mila.

Between March 4-25, the occupying forces set up combat positions from which they shot at cars carryinvg civilians trying to evacuate. As a result, 13 people died and six were injured.

The second battalion tactical group is believed to have committed the most shootings.

See official photos and video on the police website here.