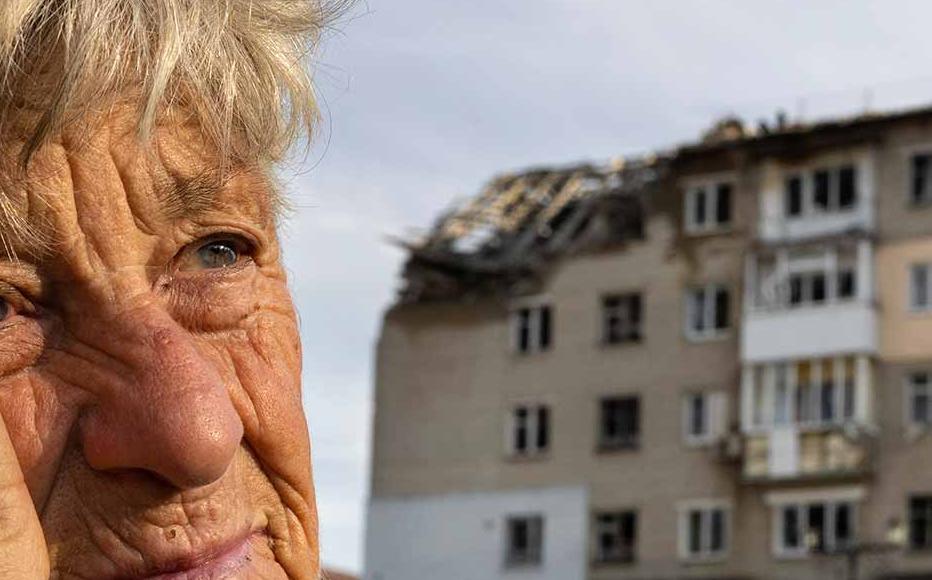 Galina Ivanenko, 77, sits in the central square on September 20, 2022 in Izium, Ukraine. She never left the city because she was taking care of handicapped family members. Izium was occupied by Russians since April 1st causing major destruction and death to the small city. © Paula Bronstein /Getty Images
Court Report

Members of a special unit tasked with reconnaissance and sabotage imprisoned and interrogated Ukrainian civilians in September 2022.

Galina Ivanenko, 77, sits in the central square on September 20, 2022 in Izium, Ukraine. She never left the city because she was taking care of handicapped family members. Izium was occupied by Russians since April 1st causing major destruction and death to the small city. © Paula Bronstein /Getty Images
The link has been copied

Four Russian soldiers have been convicted of torturing three Ukrainian men during the occupation of the town of Borova in the Izyum district of Kharkiv oblast.

Judge Antonina Sholudko of the Kotelevskiy district court in the eastern region of Poltava found Valentyn Bych, Maksym Volvak, Mykhailo Ivanov and Ruslan Kolesnikov guilty in a hearing on December 23. They were sentenced to 11 years in jail.

The four were captured by the Ukrainian security service in early October 2022 during the Kharkiv region counteroffensive.

The three victims were former combatants in the anti-terrorist operation (ATO) set up in 2014 to fight in Donbass and transformed into the Joint Forces Operation (JFO) in 2018. They no longer fought.

The four, present in the dock during the trial, were members of a special unit tasked with reconnaissance and sabotage. Two were mercenaries with the Redoubt private military company, while the others were special soldiers of the 16th separate brigade of the Russian General Intelligence Directorate.  Kolesnikov was the group’s commander.

The Russian army pushed into Izyum district on February 24, 2022, the first day of the full-scale invasion and in April occupied Borivska, the territorial community of which Borova is the administrative centre. In May, media reported the torture and interrogation of civilians in the area; the information was shared on the community’s Telegram channel.

“From one of the houses in the centre of Pisky-Radkivski village from time to time screams and groans of people are heard,” read one of the Telegram messages. “There is also information of the disappearance of ATO participants who remained in the occupied territory, and other people.”

The soldiers of the 16th separate brigade and the Redoubt mercenaries were stationed in Borova. Kolesnikov’s commander was an unidentified Russian serviceman with the call sign Amur, who is being investigated separately. According to the court, Amur worked for the Russian Federation’s Federal Security Service (FSB) and instructed the soldiers, including the four on trial, about who to capture and interrogate in the community.

The case files show that in early September, Kolesnikov received orders to kidnap three civilians in Borova, former ATO members who had already been released from military service, from various locations. The men, their heads covered and their hands tied, were driven to the Miner's Light recreation centre just outside Borova, in the back of a four-wheel car with the word Sevastopol, Crimea’s largest city, written on one door. Once there, the three men said that they were kept tied up in a three-metre deep hole in the ground without water or food.

Bych, Volvak, Ivanov and Kolesnikov took one of the victims from the premises of Boriva’s police station. After two days of threats of violence, psychological pressure and interrogations conducted by Amur, the former ATO participant was taken back to the settlement and released near the local hospital.

The second victim was abducted from his home. During the interrogation, Amur threatened to cut off his fingers if he did not disclose the information about other former ATO fighters in the town. A day later, the victim was taken from the recreation centre and released near the military commissariat.

The third victim was also seized from his house. According to the investigation, the man was hit with a hammer on his hands and feet and subjected to psychological pressure before being thrown into the pit with the other two. The beating continued the following day after which he was interrogated by Amur and subsequently taken to Mir Street, meaning peace in Ukrainian, where he was released.

The victims were not present during the trial and their personal data was withheld for security reasons. The court took into account the testimonies the victims gave during the pre-trial investigation.

The indictment was submitted to the court on December 9. The Russians were charged under the Criminal Code’s Ar. 28, part 2, and Art 438, part 1 - cruel treatment of the civilian population and violation of laws and customs of war, carried out by a group of persons in advance.

Art 438 provides for punishment from eight to twelve years of imprisonment; Art. 28 provides for the aggravating circumstances of the commission of the crime by a group of people.

The preparatory court session took place on December 13 and the defendants followed it via video connection from the Kharkiv pretrial detention centre. During the trial, each Russian soldier was defended by a lawyer appointed by the regional centre of Ukraine Free Legal Aid, and a translator helped with the translation from Ukrainian to Russian.

In court, the prosecutor declared that the defendants took advantage of the victims’ defenceless situation, stating that the Russian military had identified them as no longer Ukraine armed forces servicemen, but civilians. As such, they were protected by the 1949 Geneva Convention for the Protection of the Civilian Population in Time of War.

Bych, Volvak, Ivanov and Kolesnikov admitted their guilt and confirmed the circumstances of the crime established by the court. The four acknowledged their actions were illegal and stated that they “sincerely repent” and “ask for forgiveness for everything of the Ukrainian people”.

The forensic psychiatric examination confirmed that the accused do not have mental illnesses and were aware of their actions.

The accused’s acknowledgement means that the court limited itself only to questioning; they will not be able to challenge the circumstances of the crime and will be able to appeal only to the prescribed punishment.

When choosing a punishment, the court took into account the remorse and assistance of the accused as mitigating circumstances but also the crime’s particular gravity and the fact it was committed “using the conditions of martial law”.

The 11 year sentence matched the prosecutor’s request. The accused have 30 days to appeal the verdict. It is possible that the four will be included in a prisoner swap as has been the case with other convicted Russian soldiers.

Ukrainian law enforcement officers continue to investigate other atrocities committed in Borova during the occupation; mutilated bodies were found in a pit at the Miner's Light centre recreation. Two bodies were handcuffed to each other. In the pit, one of the deceased had scratched his name on the walls of the pit so that he would be recognised.