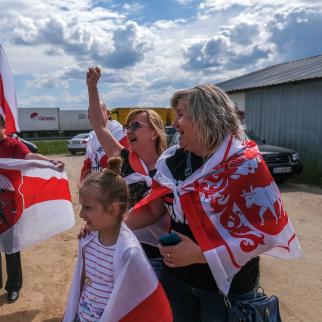 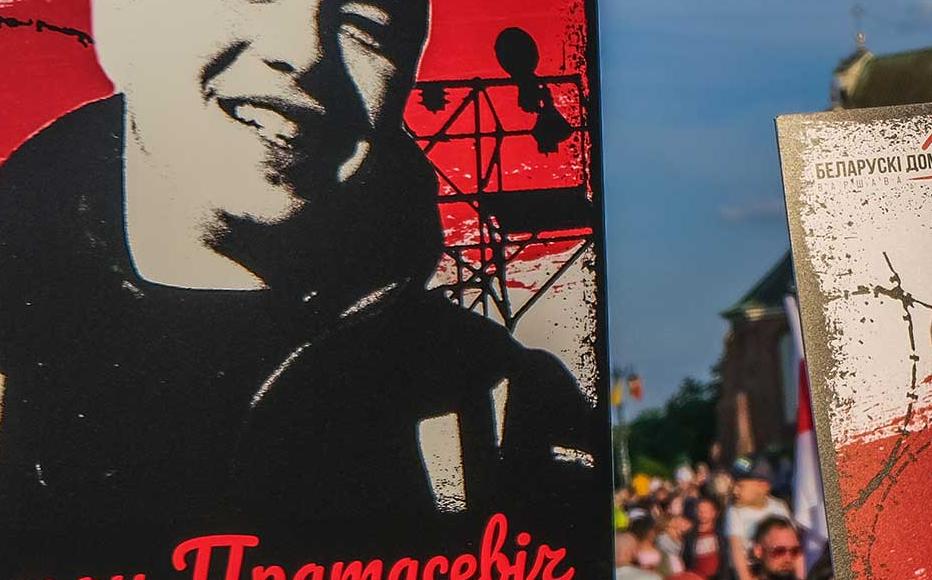 Belarusian dissidents in Poland call for international support against Belarusian President Alexander Lukashenko after authorities forced a plane to divert to Minsk to allow the detention of a prominent opposition activist. © Omar Marques/Getty Images
The link has been copied

Dmitriy and Lia had just been to McDonald's in central Minsk, when driving past a group of anti-regime protestors, they tooted their horn in solidarity. Soon after, the married couple were flagged down by a patrol officer.

“We stopped the car and I saw four law enforcement officers running toward us,” Dmitriy said. “They started smashing the windows with batons and shouted at us to get out. They pointed guns at me. I was in a state of shock and I decided to leave.

“Whilst I was pulling away, three shots were fired at our car. One hit me in the left collarbone and the other hit the car,” he continued.

Dmitriy's car was blocked in, and he bumped a traffic police car while trying to leave. They were chased through the city until the police car overtook their vehicle and the policeman threatened Dmitriy with lethal fire if he did not stop.

Dmitriy was then beaten in front of Lia and taken to a police station, where he was videoed being beaten again: the footage would later circulate on the Internet.

Human rights organisations warn that systematic violence has become routine in Belarus, with such ill-treatment amounting to torture. Even small acts of defiance can have serious consequences.

According to Human Rights Watch, common abuses include forcing people into “prolonged stress positions, electric shocks… [with] detainees in custody for several days, often incommunicado, in overcrowded and unhygienic conditions”.

The Belarus women’s association is in the process of filing a case against the Belarusian regime for “grave crimes against women,” and Lia said that she had seen evidence of abuses when she herself was detained.

"There was not enough air in our cell, women were crying,” she said. “One woman had her head bashed against the wall. I hid under the bed in the cell and crammed myself into a corner. I realised that I still had my phone with me, and that's how I managed to inform my family what was happening to us.”

After further beating, Dmitry was then forced to confess to crashing into the police car deliberately.

“I said it so they would let me live," he recalled, although he refused to agree that he had hit the riot policemen on purpose, despite being hit again by three soldiers.

He was then hospitalised with multiple injuries including concussion, facial fractures and numerous bruises. Whilst in hospital he learned that a criminal case had been opened for which Dmitry could face up to five years in prison. The couple fled to Poland, where they have now claimed asylum.

Since rigged presidential elections in August 2020 sparked a wave of protests in Belarus, the authorities have clamped down with continuing violence and intimidation. A year on, there has been a fresh wave of arrests throughout the country, including former ambassador Ihar Lyashchenya, who was accused of “organising mass disturbances” in August, 2021.

According to a recent report by Amnesty International, more than 30,000 people have been detained since protests first began. Often, partners and family members are also targeted.

The ill treatment of prisoners amounts to torture according to Viasna, a Belarusian NGO, which has been documenting human rights abuses since 1996. It says that the overall human rights situation in the country has continued to “deteriorate significantly”.

Human rights activist Victoria Fedorova said that by August 2020, more than 600 citizens had filed complaints about injuries received during detention, according to official data from the Investigative Committee NGO.

The World Organisation Against Torture (OMCT) has concluded that the authorities have done nothing to investigate allegations of such abuses.

"According to our estimates, we can say that almost every detainee between August 9 and August 12, 2020 [when the election protests started] was subjected to either torture or excessive use of force and inhumane detention conditions,” Fedorova said.

“About 7,000 people were officially detained at that time. It is worth noting that torture continues to this day, so the number of victims is constantly growing. Of course, not everyone files complaints or petitions to the investigative committee. Many are afraid of reprisals and do not see the point. Since August 2020, not a single criminal case against law enforcement officials has been initiated.”

The situation has deteriorated to such an extent that even football fans have found themselves targeted by the authorities, who accuse them of being the main driving force of protests in Belarus.

In March 2021, Belarusian law enforcers reported 65 criminal cases against soccer fans. The names of most of them remain unknown.  In August 2021, the police detained five more fans who participated in last year's protests.

Football fans Anton and Ilona were sitting on the terrace of a restaurant with their parents, when two vans pulled up to the venue. Unidentified masked men demanded that all young men come with them for a “document check”.

The men were beaten and insulted on their way to the police station.

"They told me I would never be released. I was also subjected to violence and torture, after which they sentenced me to 13 days of administrative arrest,” Anton said.

Anton was detained for a second time in October 2020, whilst he was at a pro-peace march.

"On the way to the police department and inside the building I was repeatedly beaten and left out in the cold in a garage all night. In the end I was given 15 days in jail,” Anton says.

Anton and Ilona fled to Ukraine, where they still live. They have no plans to return to Belarus whilst Lukashenko is in power.