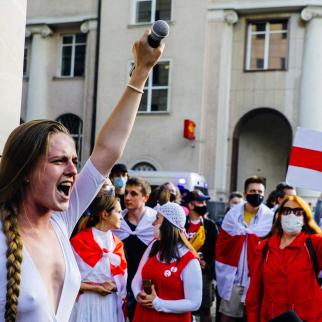 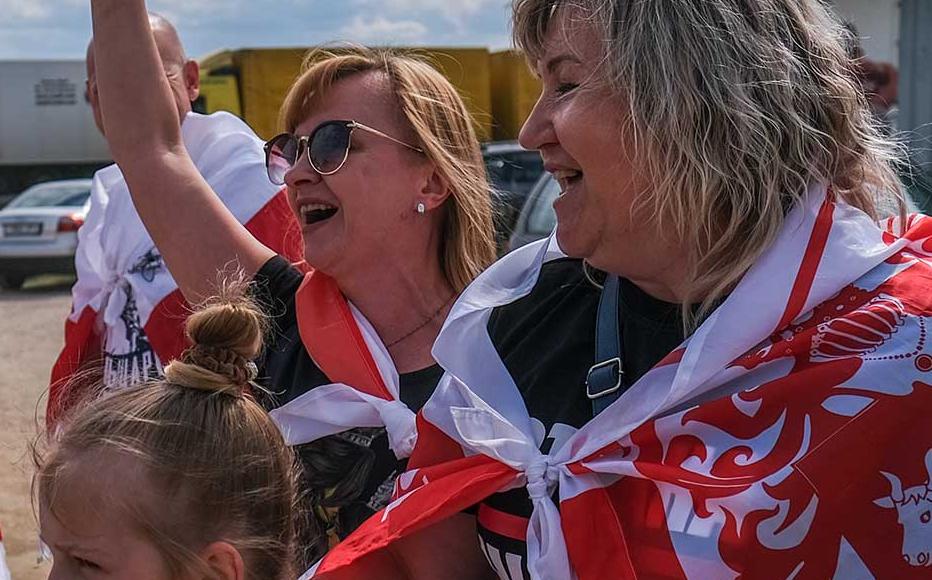 Exiled Belarusians hold historical Belarus opposition flags as they take part in a protest at the Polish-Belarusian border crossing on June 05, 2021 in Bobrowniki, Poland. © Omar Marques/Getty Images
The link has been copied

Journalist Valiaryna Kustava was returning from the gym in Minsk when friends called to warn her that police officers had burst into her flat and begun searching it.

“I had to escape immediately, without clothes, money and documents,” explained Kustava, a presenter at Polish satellite station, Belsat TV. “A friend lent me a warm dress.”

She then had to cross the border by river at night, leaving her two-year-old daughter with relatives in Minsk.

“It was Belarus’s mass boat people exodus. Deep in the night, people like me, wearing indoor clothes, without any possessions, trying to find a place in a flimsy overloaded rubber boat,” Kustava said. “I realised it’s a regular route. It’s how Belarusians escaped before me and will flee after. I was terrified. It was like watching a movie..”

International justice campaigners say that this Belarusian diaspora could be key when it comes to holding the regime to account at the International Criminal Court (ICC) in the Hague.

In May 2021, international human rights organisations together with Belarusian NGOs asked the ICC prosecutor to open a probe into alleged crimes committed by the Lukashenko regime, following a previous attempt in September 2020 .

The ICC has the mandate to prosecute those suspected of serious crimes on the territory of states party to the Rome Statute, its founding treaty. Some argue that the governments of Poland and Lithuania, where many Belarusians have relocated, could set a regional precedent by appealing to the court on the grounds that crimes in Belarus have continued on their territories.

“Poland and Lithuania can easily take Belarusian authorities to the International Court. Both countries have ratified the Rome Statute,” said Eugenia Andreyuk, a human rights lawyer with the International Committee on Investigation of Torture. “This is what Bangladesh did in 2019, initiating an ICC investigation into the situation in Myanmar. The same mechanism could be used for Belarus. It’s completely up to the governments.”

Germany, Lithuania, Poland and the Czech Republic have already opened criminal cases within their jurisdiction against the Belarusian authorities.

Lithuanian and German prosecutors have launched a pre-trial investigation into crimes against humanity following complaints by Belarusians.

Another way to invite the ICC to exercise criminal jurisdiction in Belarus would be to refer the case to the UN Security Council, even though it would almost certainly be vetoed by Russia. In her annual report to the Human Rights Council, UN Special Rapporteur Anaïs Marin described the situation in Belarus as “requiring renewed attention of the international community” as it “could threaten regional peace and security”.

“In 2014, Russia and China vetoed the referral of the Syrian case to the ICC,” she continued. “In 2015, Russia was the only country that blocked the UN resolution to set up an international tribunal into the Malaysian Airlines flight MH17 shot in July 2014. As a result, the United Nations general assembly established a mechanism to investigate and preserve evidence of international crimes in Syria. The trial of the Malaysia Airlines flight MH17 crash has also started hearing evidence and witness testimony in the district court of The Hague.”

In very rare cases, the ICC chief prosecutor can independently decide on preliminary examination into alleged crimes in states which have not signed the treaty, despite a UN Security Council veto.

This can lead to unexpected consequences. For example, the Trump administration ostracised the office of former ICC prosecutor Fatou Bensouda, for her efforts to investigate US personnel over alleged war crimes in Afghanistan and Iraq, and Israeli operations in the Palestinian territories. She became the first chief prosecutor on whom the United States imposed economic sanctions and a travel ban.

At the end of June, British barrister Karim Khan took over as third prosecutor in the ICC's 18-year history. It remains unclear whether Khan will open a full probe into alleged atrocities in Belarus. There are several precedents in which the ICC prosecutor has returned to an investigation which had been previously closed, although it may take years to complete. In Ukraine, for example, this lasted six years.  A similar lengthy process would give  Lukashenko apparatchiks enough time to find a safe haven somewhere in Russia.

Thus far, the ICC has maintained that the case of Belarus remains outside its jurisdiction.

“Belarus is not a state party of the Rome Treaty and the United Nations Security Council has not referred the situation to the Court,” said Fadi El Abdallah, head of the public affairs unit at the ICC. “Thus, it has no jurisdiction to look into the allegations.

"If there is evidence on deportation or forcible transfer or such crimes of which a part happens on the territory of a state party to the ICC Rome Statute, such evidence shall be communicated to the ICC prosecutor. He will decide on whether or not to open an investigation about it.