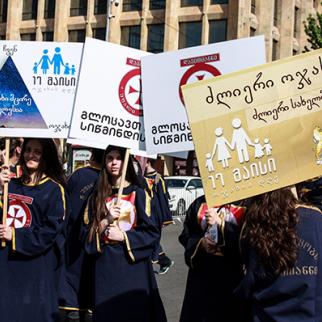 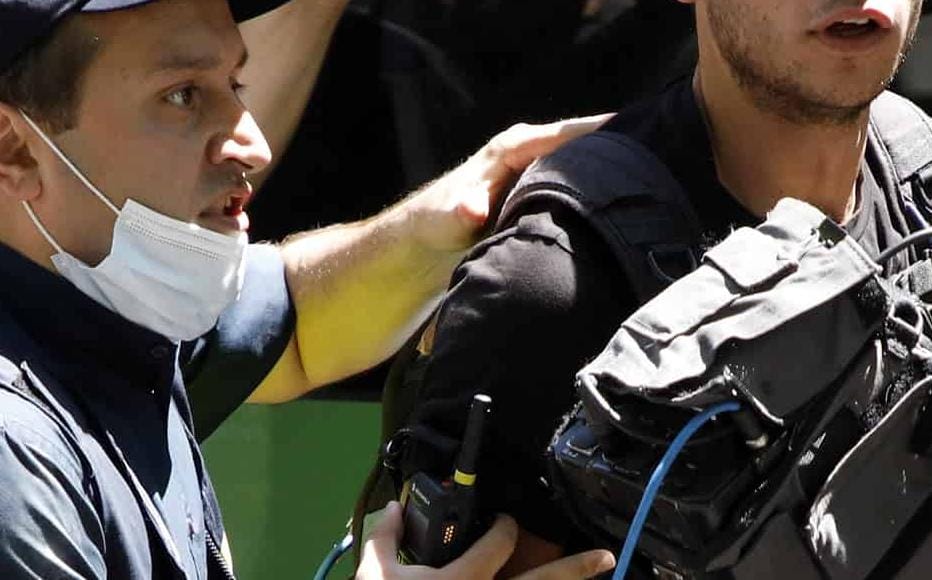 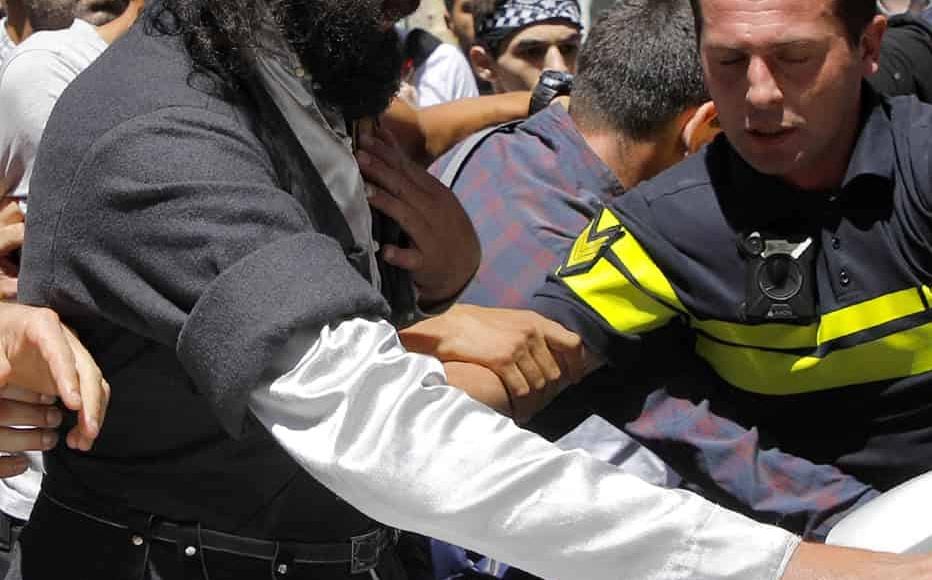 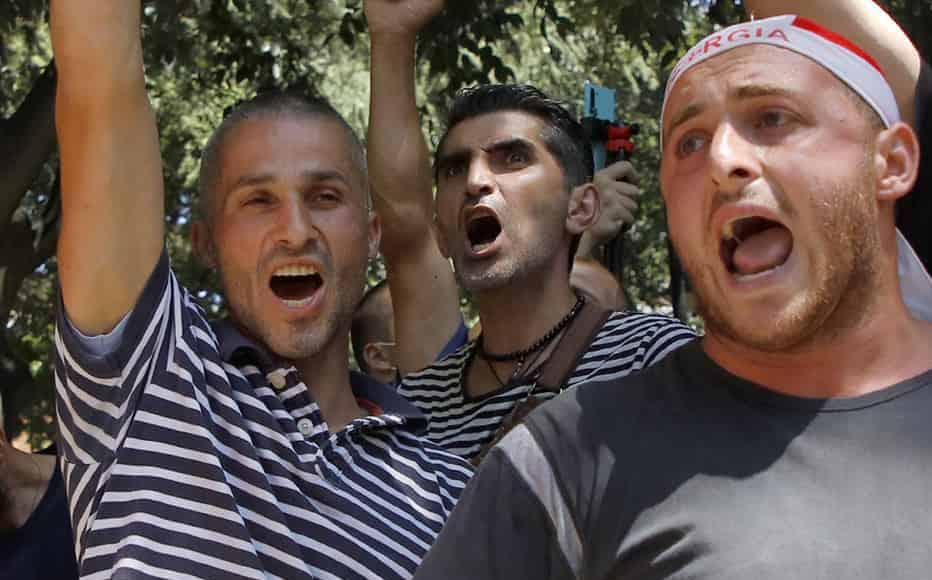 A violent mob stormed the area and the planned July 5 march was cancelled. © Davit Mdzinarishvili/IWPR 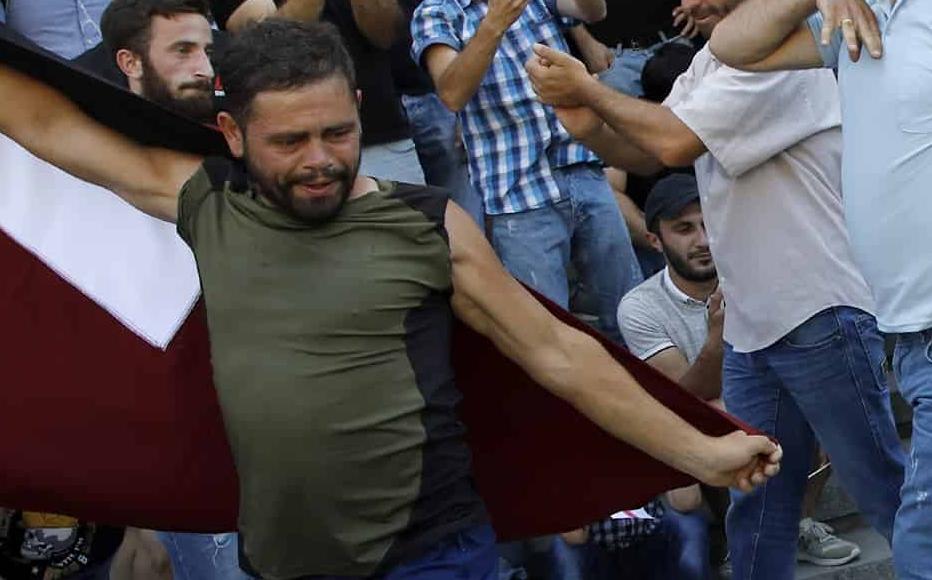 Counter protesters celebrated by dancing and singing in front of parliament, where they tore down the US and EU flags and replaced them with a black iron cross. © Davit Mdzinarishvili/IWPR
The link has been copied

Organisers of this week’s cancelled Pride march in Tbilisi have accused the government of fuelling the violence that led to its cancellation and allowing the angry mob to attack activists and media workers with impunity.

The planned July 5 march was abandoned after scenes of extreme violence by counter-protestors in the Georgian capital.

Until the last minute, I believed that this march would become a turning point for the queer community,” said Pride organiser Giorgi Tabagari.

Indeed, the two previous events within Pride week had gone smoothly. The Tbilisi Pride Fest and the screening of a documentary about the 2019 march were attended by the ambassadors of the UK, France, Germany and Israel, and police prevented attempts by counter-protestors to disrupt them.

Activists say that the situation changed after Prime Minister Irakli Gharibashvili said, just hours before the march was due to begin, that former Georgian President Mikheil Saakashvili and his allies were behind the Tbilisi Pride and that “such rallies and events, on the contrary, only serve to increase the discrimination of these minority groups”.

Irakli Kobakhidze, chairman of the ruling Georgian Dream party, also announced that “the radical opposition” had organised the march for its own political interests and that its purpose was not to protect “the rights of anyone”.

Prominent anti-LGBTI activist Guram Palavandishvili staged a protest in front of the EU delegation to Georgia, calling for US ambassador Kelly Degnan and her EU counterpart Carl Hartzel to be declared personae non grata.

“We are not violent and we are not attacking anyone at home,” Palavandishvili said. “They can do whatever they want at home. But we will not allow anyone to promote sodomy and lechery.”

As the violence escalated, journalists became the main target of the counter-protestors. Media workers from more than a dozen outlets were physically and verbally assaulted and had their equipment damaged

According to the ministry of internal affairs, 53 out of the 55 people injured during the rally were journalists.

“I do not know why I was attacked and who [the attackers] were,” said Tornike Mandaria, a reporter from Radio Liberty. “Several people were beating me. They broke my nose and teeth. Our cameraman Dato Koridze came to help me and they beat him as well. More than ten people were beating him. The police were standing 30 metres away and saw everything, but they did nothing to protect us.”

The protestors even attacked a Polish tourist, apparently because he was wearing an earring. He was stabbed four times in the chest.

The mob also raided the office of Tbilisi Pride and burned their flag, and attempted to attack the office of the Shame youth movement, co-organiser of Pride Week. An explosive device was detonated at the Tbilisi Human Rights House, where about 50 activists were gathered.

“The authorities not only failed to ensure the safety of the queer community and our supporters, but also created obstacles for us to exercise our right to assembly,” said Tazo Sozashvili, one of the founders and organisers of Tbilisi Pride. “The prime minister’s statement encouraged the aggressors and turned the vector of violence towards us.

“The number of violent activists on Rustaveli Avenue was small and the ministry of internal affairs could freely detain them if they wanted,” Sozashvili continued. “We met with the officials from the ministry of internal affairs many times. They were well aware of our plans. We also proposed specific ideas for holding the march safely. But instead of taking effective measures, the government encouraged violent groups.”

LGBTI activism has been growing in Georgia since 2013, when the community organised its first rally outside parliament, which was also attacked by a violent mob. Gharibashvili in his role then as minister of internal affairs did little to restrain the aggressors, instead dispatching security forces to evacuate the LGBTI activists in minibuses.

The LGBTI community remain an extremely vulnerable group, widely discriminated against and facing physical and psychological violence. Since 2014, three transgender women have been killed in Georgia because of their identity.

One of the leading forces opposing Pride and the LGBTI rights movement is the orthodox church, the country’s most trusted and influential institution. This year, the Patriarchate issued a statement insisting that Pride organisers were “promoting a non-traditional way of life under the guise of human rights” and that the march “deliberately distorts” values that “can have extremely negatively impact on minors and violate the best interests of children”.

Mariam Kvaratskhelia, a lawyer and LGBTI activist, said that this accusation was nonsensical.

“You can have propaganda of values ​​and ideas but propaganda of sexual orientation is impossible,” she said. “There is no scientific evidence to suggest that anyone changed their sexual orientation after a public rally by the LGBT community. This fear is irrational and unfounded. To someone who says that members of the LGBT community should stay in their own bedroom, I say put yourself in my position and imagine what it is like to hide all your life, hide love from your loved one, to lie all your life and then die like that.”

Vasadze had issued an ultimatum to the government, threatening to disrupt the march unless it was cancelled. He claimed that it would allow the “enemies of national traditions to break the moral code of Georgia” and called on law enforcement forces “not to support the celebration of immorality in Georgia”.

Campaigners warn that the violence was intended as an attack on democracy and Georgia’s Western trajectory as much as on the LGBTI community.

“What happened was not about the pride march,” said Salome Barker, one of the founders of the Shame Movement. “It was a deliberate act against the entire liberal community of the country. It was an intentional attack on the non-governmental sector and all the media that worked in the streets. Georgian democracy and the secular state were defeated again. It’s very painful because I believed that the community was moving forward and evolving.”

Others also see malign outside influences stoking social divisions in an attempt to destabilise the country.

“What happened in Tbilisi is an expression of the classic Russian hybrid war,” said opposition lawmaker Teona Akubardia. “It is in Russia’s interests to divide the society and implant distrust in state institutions, and Russia has achieved its goal today. What we saw was an attack on statehood, democracy, free media and Western orientation. The country has a declared course of Euro-Atlantic integration, and Georgian Dream has included it in the constitution. However, with the current developments, Georgia became very similar to Putin’s Russia, where people are persecuted for their different viewpoints and freedom of expression is restricted.”

LGBTI activists have vowed to fight on, holding a mass pro-Pride and democracy demonstration in front of parliament on July 6.

Tabagari also said that the movement would not be defeated.

“This is an irreversible process that will not stop despite the violent resistance of hate groups, the patriarchate and the government,” he said. “We will definitely come out again for pride.