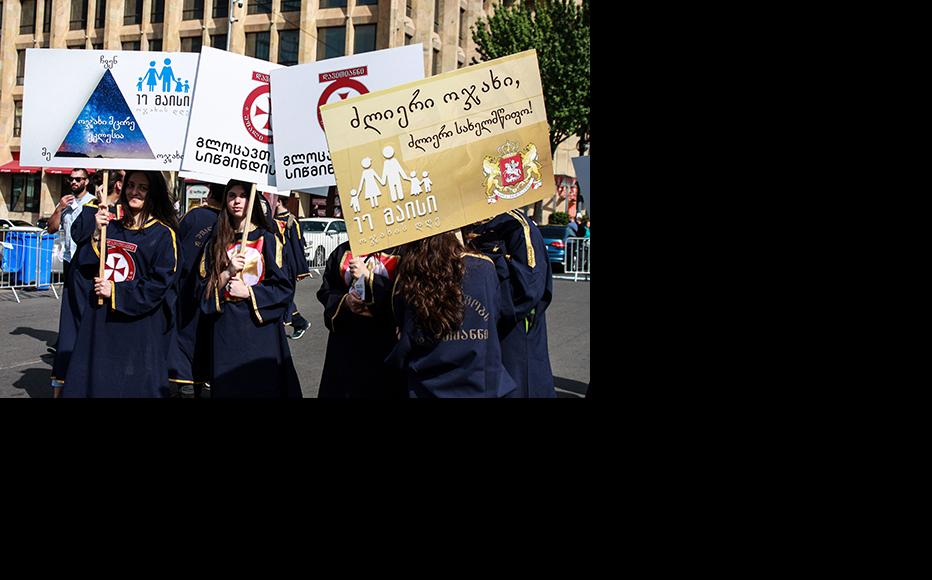 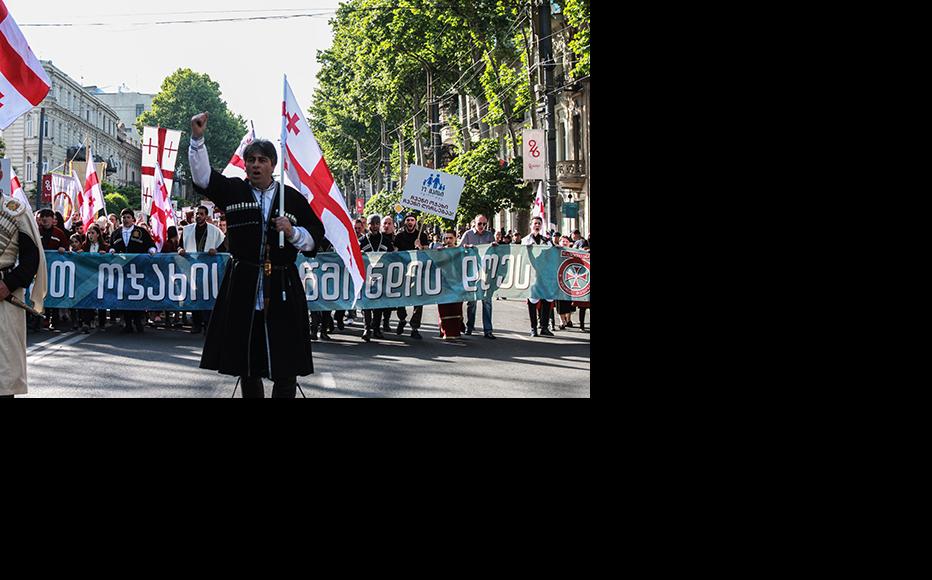 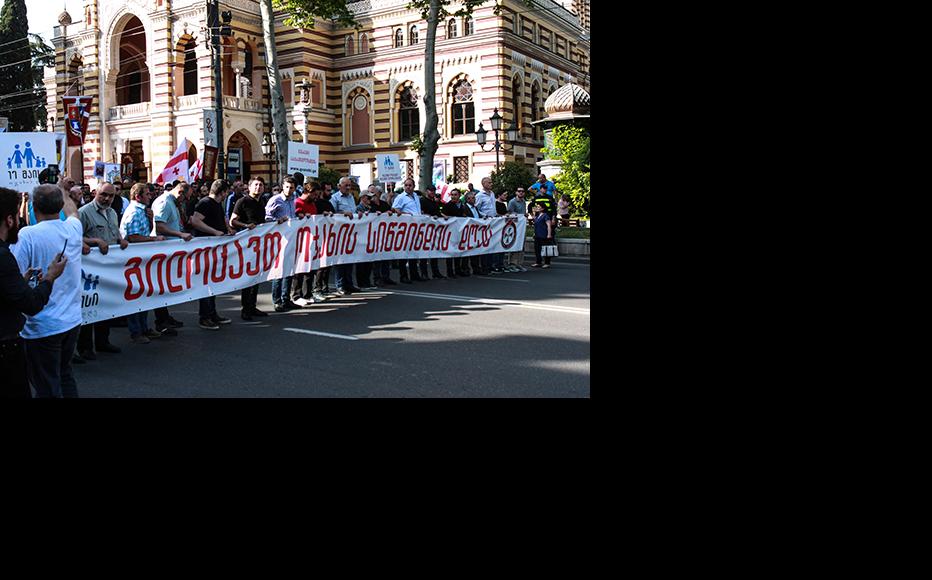 Organisers of Georgia’s first-ever Pride week in Tbilisi this month are bracing themselves for a backlash from the religious establishment and conservative figures.

The five-day event will kick off on June 18 with a performance of Kafka’s Metamorphosis staged by LGBTI people. A conference with delegates from the Caucasus and the Eastern Partnership countries as well as the Balkans will discuss the challenges facing LGBTI people in the region. The proceedings will conclude with a Pride march - which organisers fully anticipate to be more political than celebratory.

“We are expecting violations and aggression,” Tbilisi Pride organiser Giorgi Tabagari said, explaining that the LGBT community and their supporters had long been engaged in a battle with the Church and right-wing groups. “We have already received threats from different groups. This is not new for us, we have gotten used to these kind of attitudes. Our appearance in the public space usually activates these groups.”

Pride organisers had anticipated that around 2,000 people would attend the march. However, the ministry of internal affairs announced that they were unable to guarantee participants safety unless the event was held in a club or stadium instead. Attendees may now need to be registered for security reasons, which organisers expect will likely affect overall turnout.

Although Georgia has made some legal improvements to LGBTI rights, including the adoption of an anti-discrimination law, attitudes remain largely negative. The Public Defender’s annual parliamentary report emphasised that discrimination on the grounds of sexual orientation and gender identity remained a key challenge in Georgia. For instance, according to the Caucasus barometer 2018, 54 per cent of Georgians do not want LGBTI people as their neighbours.

“One of the biggest problems still is the stereotypical view of society of the LGBT community and their supporters, which many times reveal homophobic attitudes,” she continued, noting that one manifestation of this was the response to attempts to mark International Day Against Homophobia and Transphobia (IDAHOT) each year on May 17.

In 2013, thousands of protesters attacked a group of LGBT activists holding a peaceful gathering. The following year, the Georgian Orthodox Church decided to rename May 17 as Family Purity Day and an opportunity to celebrate ‘traditional’ values.

For the last two years, attempts to mark IDAHOT have been cancelled. Instead, Family Purity Day celebrations have grown, this year concluding with a concert in the courtyard of Trinity Cathedral. Hundreds of worshippers led by clerks, far-right groups and politicians, as well as various conservative groups gathered at the First Republic Square and marched along the central Rustaveli Avenue towards the cathedral to be welcomed by the head of the Georgian Church, Patriarch Ilia II.

“A family can only be happy if it is legal, formed by a man and a woman,” the Patriarch said in his homily, while emphasising that Family Purity Day was not directed against any one group.

“The church has no antagonism, we worry about Georgia,” the Patriarch said.

The Patriarchate youth organisation Davitianni organises Family Purity Day each year and its president, Kote Svanadze, also said that their celebration was peaceful and did not endorse any kind of violence.

“For us, family comes first and we care about protecting our Georgian traditional families,” he continued. “People love this day and every year we celebrate it widely. I think our country gained one more beautiful day to celebrate. We always distance ourselves from the aggression of far-right and radical groups.”

However, he stressed that while every citizen had the right to self-expression, openly displaying one’s private life “in such way or forms” is provocative in a country with such conservative traditions as Georgia.

Some analysts fear that anti-LGBTI sentiments in Georgia are being manipulated as part of a wider attempt to sow dissent. Eto Buziashvili, a researcher at the Atlantic Council's Digital Forensic Research Lab, said that some of the online discourse ahead of Pride may have been stage managed.

“The narratives shared by a number of Georgian far-right Facebook pages, one of which featured a manager based in Russia, identically demonise the West and liberal democracy, as well as presenting the LGBT community as a threat to Georgia,” she explained. “The duplicated messaging, coupled with the observation that the pages often posted simultaneously, is evidence of an operation with some degree of coordination dedicated to stopping the Pride event, as well as having a broader agenda of increasing polarisation regarding LGBT issues, and undermining Georgia’s Western integration by demonising the West.”

But there is also plenty of home-grown prejudice. Research conducted in 2017 by the Media Development Foundation (MDF) on hate speech noted that homophobia was rife. Of the nearly 1,926 discriminatory comments logged on mainstream media, 38 per cent were homophobic in nature.

MDF researcher Tinatin Gogoladze said that common narratives around homosexuality included that it was a trait imposed by the West, an act of sin or perversion. There had been numerous calls for same-sex relationships and marriage to be banned.

For instance, when Guram Kashia, the vice-captain of the national football team and a centre-back for Vitesse Arnhem, chose to wear an armband in support of the LGBT community in a 2017 match he was fiercely criticized and threatened with violence.

Nonetheless, the Georgian Church appears to remain intractably opposed to any expression of LGBTI rights.

“The teaching of the church is unique,” he said. “Maybe some members of the church are wrong, but the church and its doctrine - never. Homosexuals’ doctrine is different, it is violent. Read the Gospel and you will understand what the church teaches, and read their [LGBT] doctrine which says, ‘beware human! I am coming, the world will convert to my laws, you will be broken, beware me’ this is their gospel.”

Nationalist politicians are also weighing in. The Alliance of Patriots party, represented by a handful of deputies in parliament but which seems to be gaining popularity, has been a staunch critic of LGBT rights in Georgia.

One of its lawmakers, Emzar Kvitsiani, drafted a bill to remove references to LGBT rights in the country’s anti-discrimination law, although this ultimately failed.

“This law is discriminatory for people with a normal orientation,” he said. “It puts [LGBTI people] higher than us. I don’t know what happens elsewhere in the world, but here we are in Georgia, we have our identity, our religious and traditions and we celebrate Family Purity Day. We do not need propaganda on abortion, homosexuals and drug addicts. Their private life belongs to them, but we will not allow them to march on the main avenue.”

Tako Svanidze is a freelance journalist and IWPR contributor based in Tbilisi.

Giving Voice, Driving Change - from the Borderland to the Steppes
Georgia
Human rights
Connect with us