A swathe of cyber activists are making Armenia’s case to a global, virtual audience.

A swathe of cyber activists are making Armenia’s case to a global, virtual audience. 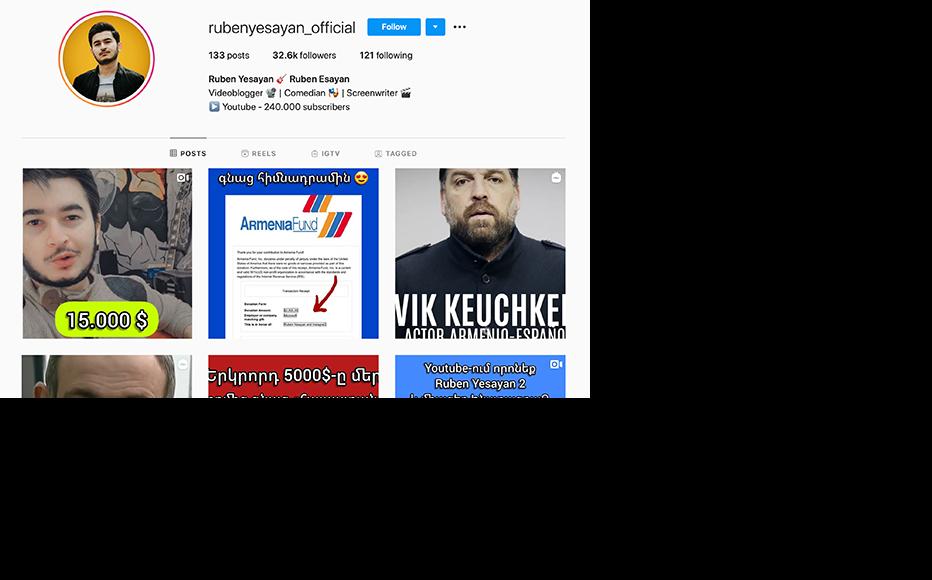 Ruben Yesayan's Instagram Page where he lobbies celebrities to raise awareness of the Karabakh conflict. 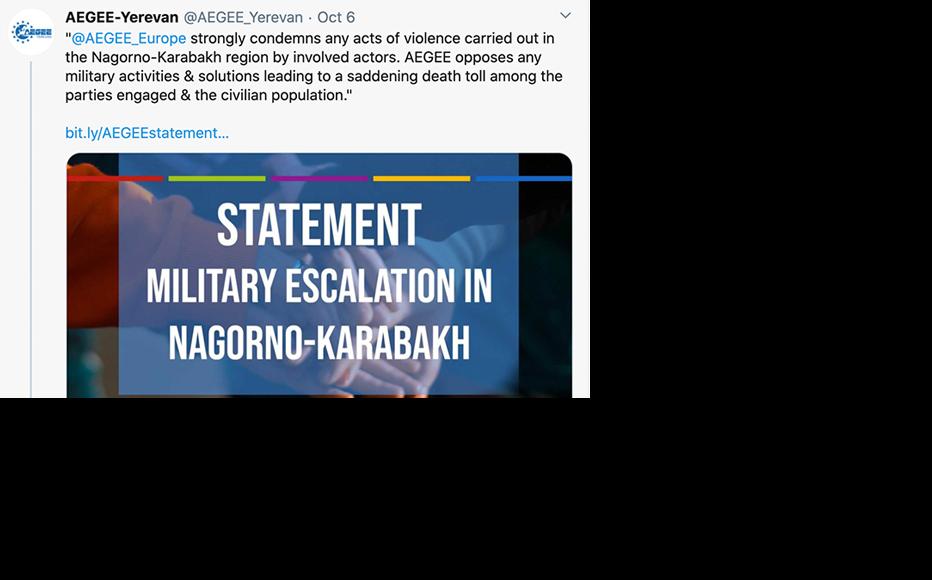 Official Twitter page of the NGO AEGEE-Yerevan.
The link has been copied

Ruben Yesayan has spent the last few years building up a following as an Armenian video blogger, posting comedy clips on a Youtube channel with more than 200,000 subscribers.

Since the renewed conflict in Nagorny Karabakh began on September 27, however, he has thrown himself into online activism.

The InstaGrad groups he launched on Instagram and Facebook quickly reached some 70,000 followers alike, with the aim of recruiting high-profile international support for Armenia.

“We focus on international celebrities, we send them letters in which we describe the situation in Armenia. We ask them to call for ending the aggression,” said Yesayan, also studying IT and Applied Mathematics at Yerevan State University.

Approaches have included actor Selena Gomez, pop star Justin Bieber’s wife – and Yesayan said that his efforts had already paid off when it came to creating an online buzz.

“We wrote to Cardi B [and] her husband Offset - and he posted a story about it, and then Azerbaijanis started to attack him.”

Armenians have embraced social media activism and even cyber warfare amid the conflict with Azerbaijan over Nagrony Karabakh – with their Azeri counterparts giving as good as they get. Since fresh fighting broke out on September 27, a simultaneous online war has focused on promoting national narratives while disrupting the other side’s information flow.

Alice Sharafyan, communications manager at the AEGEE-Yerevan youth organisation, said that her organisation had decided to focus on Twitter as the best way of getting their message out to a global audience.

“We already have more than 20,000 group members,” she continued. “We post small tweets of MFA statements and distribute them with basic hashtags. Our main hashtags are #StopAzerbaijaniAggression and #ArtsakhStrong [the Armenian name for Karabakh] we post more than 20,000 tweets every day. We also have groups in Germany, Austria and Los Angeles. Currently, our key hashtag is #SanctionTurkey. Today we sent 40,000 tweets in an hour.”

She described one recent incident in which she said that Azerbaijani activists launched a disinformation campaign with the hashtag #DontBelieveArmenia.

In a carefully timed counter-response coordinated with other Armenians, she said her team “started to post our tweets under this hashtag.... We posted Armenian videos. There was a panic, it turned out that their hashtags were used against them”.

Martirosyan noted that the Twitter war was not merely bilateral; both sides were supported by other countries, as well as their own diasporas.

“Azerbaijani Twitter users are supported from Turkey and Pakistan; India, Greece and Cyprus back Armenia,” he said. “There are many users from Saudi Arabia and Arab countries helping to convey the Armenian message.”

And beyond social media activism, hacker groups have been launching direct attacks on digital infrastructure.

“[Armenian] hackers break into their pages and turn them into Armenian, this is the easiest option,” Sharafyan said.

“The information security strategy of Armenia is based on this approach, as cyber attacks are mainly related to information - for example, the hacking of government and news websites in order to prevent the flow of information from the enemy and hacking of the users’ accounts, the aim of which is to spread information on their behalf,” he said.

Martirosyan said that further attacks had included one on Azerbaijan’s banking system on October 11, including the transactions of about 520,000 clients.

“The hackers also warned that they could take more action to disable other Azerbaijani infrastructures,” he said.

On October 3, Armenian hacker group Monte Melkonian, named after a famed commander killed in Karabakh in 1993, announced in a Facebook post that their next target would be AzerTelecom, the largest communications service provider. The group said that they already had 5GB of data.

Armenians also hacked into 13 Azerbaijani TV channels and broadcast a pro-Armenian video for ten minutes during a live programme.

IT and media expert Artur Papyan said that both sides had been trying to bring down each other’s sites.

“In the first days of the war, a number of Azerbaijani sites were inaccessible,” he said. “Initially, it was done by Armenian hackers, then by Greeks, then again by Armenians. They do the same. About 90 Armenian sites and domains were redirected. They posted Aliyev's speech, a photo of their hero Mubariz [Ibrahimov, an Azerbaijani soldier killed on the frontline in 2010 who was posthumously honoured by President Ilham Aliyev]. It was a domain attack. But occasionally, some powerful DDoS attacks [when hackers crash the site with too much traffic] happen too, mainly on Armenian news sites.”

The intention was to ensure that internet searches directed the user only to one side of the conflict.

He added, “Now DDoS attacks are being carried out on both sides. Websites on both sides are malfunctioning, they are not loading. It refers to government sites as well. People are searching for information on social networks which is full of fakes. And here starts the panic, by disregarding the truth, the fakes are being promoted.”

“Facebook’s analysis of Azerbaijani fake profiles and pages is very detailed,” Papyan said. “The official report mentions their active propaganda related to the conflict in Nagorny Karabakh. The fakes are systematized. At particular hours they praise Aliyev’s regime and criticize opposition. These fake accounts were removed on Facebook as well as on Instagram. The report said that 6,600 US dollars was spent on advertising these pages on Facebook.”

As soon as the fresh fighting broke out, the Azerbaijani government restricted domestic internet access and blocked social networks including Facebook, WhatsApp andTelegram.Twitter was left open and “used as a platform for external propaganda,” Martirosyan said.

Political scientist and former lawmaker Styopa Safaryan currently heads the Public Council of Armenia. He said that the outpouring of activism on social networks was due to high public trust in official information sources in Armenia.

“I am saying this not because I am Armenian, but because the Armenian side is working well, since the interaction between the authorities, society and the front line is clear, transparent and reliable,” he said, adding that “Azerbaijanis receive information only through one channel, very few have access to alternative information”.

However, he said that little had been achieved through all these online efforts - and certainly not as regarded an actual exchange of information or views.

“A lot of work has to be done here. I do not see any tangible results,” he continued. “All we can see are symbols, flags, hashtags and tweets sent to international organizations. [The Azeri side] write Karabakh is Azerbaijan, and the Armenians say that Artsakh is Armenia, everything is at the level of hashtags, and there are very few real, actual debates.”

Giving Voice, Driving Change - from the Borderland to the Steppes
Armenia, Azerbaijan, Karabakh
Social media, Twitter, Conflict
Connect with us