Concerns that militant and drug-trafficking threats might rise after NATO-led forces leave Afghanistan.

Concerns that militant and drug-trafficking threats might rise after NATO-led forces leave Afghanistan. 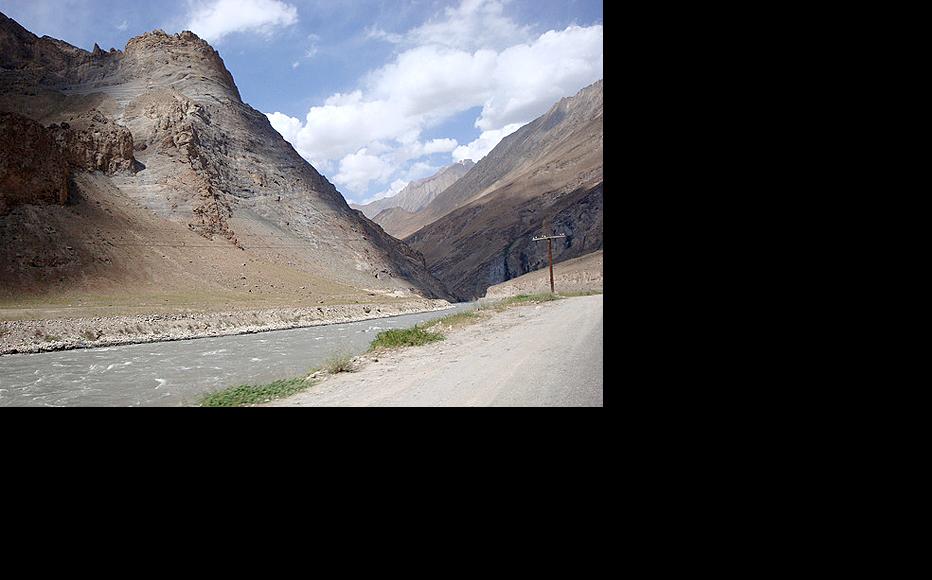 Defending Tajikistan’s border with Afghanistan presents huge challenges, not least because of the steep terrain. This river marks the frontier. (Photo: Citt/Flickr)
The link has been copied

Officials in Tajikistan and Afghanistan are playing down fears that the withdrawal of NATO-led troops later this year will create new security threats on their countries’ shared border.

Tajikistan’s government has long struggled to control movement across the 1,300-kilometre border with Afghanistan, but its efforts have been hampered by the difficult terrain, lack of funding and widespread corruption.

The narcotics trade is already a destabilising force in Central Asia, and the Tajik border is a well-established transport route for Afghan heroin heading for Kyrgyzstan and on to Kazakstan and Russia.

There are also concerns about the threat posed by Islamic militants. Although many analysts agree that the Taleban’s ambitions are limited to Afghanistan, other groups are seen as a risk to regional stability. Experts say Central Asian militants in northern Afghanistan could use the departure of NATO troops to return to their own countries, funding their operations through drug trafficking.

The major concern is the Islamic Movement of Uzbekistan (IMU), which raided Kyrgyzstan and Uzbekistan in 1999 and 2000 before relocating to northwest Pakistan after the Taleban were overthrown by the 2001 United States-led invasion.

Last year, militants from the group were reported to have gathered near the border with Tajikistan, and the IMU and the Taleban claimed joint responsibility for several attacks in Afghanistan. (See Central Asia at Risk From Post-2014 Afghanistan.)

Some residents of Tajikistan’s border regions say they fear for the future.

“I am worried because as far as we can see, the border is not protected properly,” said Malika Hafizova, from Tajikistan’s southwestern Shuroabad district. “When the border is porous, terrorist groups can use it to infiltrate and this could lead to instability. Even now, we are seeing illegal groups cross into our territory from Afghanistan and get involved in shootouts on the Tajik side.”

People on both side of the border involved in the drugs trade, and Hafizova noted a widespread phenomenon where local Tajiks were taken hostage and livestock seized until trafficking-related debts were repaid..

FEARS OF A SECURITY VACUUM

In March, the European Union and the Japanese government organised a conference in Dushanbe on ways to enhance border management, cross-border co-operation and counter-narcotics measures involving Tajikistan and Afghanistan.

Erkin Tajibaev, a representative of the Border Management in Northern Afghanistan project, funded by the EU and implemented by the United Nations Development Programme, told IWPR that the international community was concerned about future threats of terrorism, drug trafficking, organised crime and corruption.

“The first stages of the withdrawal have already been set in motion,” he said. “The coalition forces are handing over their responsibilities to local Afghan authorities. So far, I do not see any particular threats to Tajikistan as Afghanistan is busy electing a new president. Depending on who comes to power, there will be a power struggle to establish spheres of influence.”

Highlighting the longer-term problem of Islamist insurgents, he added, “The danger for Tajikistan lies in infiltration of groups based in Afghanistan. These are militants of the IMU who left [Central Asia] and crossed to the other side of the border, plus al-Qaeda militants.”

He said the frontier was secure, although the terrain made control difficult.

“The Tajik border is being protected as it has always been. All the border posts that existed when Russian frontier troops were protecting the border remain and are operational. Some border posts have been renovated and re-equipped. What presents difficulties is the complex mountainous terrain, which is impossible to monitor.”

A Tajik border guard who asked to remain anonymous told IWPR that the most troublesome stretches of border lay in the Shuroabad, Hamadoni and Panj regions – all relatively low-lying terrain on the Panj/Amu Darya river that forms the frontier.

“But our border troops are in a high state of preparedness. We are ready to thwart any attack,” he added.

Further east, the border between the two Badakhshan provinces of Tajikistan and Afghanistan lies in much more mountainous terrain, and has been consistently hard to police over many year. Murodhuseyn Aliyorov, head of the Badakhshan branch of Tajikistan’s Drug Control Agency, told IWPR in 2011 that the terrain in the Ishkashim district, in particular, made it a key route for Afghan heroin smugglers. (See Unrest Subsides in Southeast Tajikistan on a recent incident linked to drug trafficking in Badakhshan.)

To the west lies the Uzbek-Tajik border, which consists of flat semidesert. Uzbekistan has stronger security forces than Tajikistan, but does not generally cooperate on frontier control matters. (See Uzbeks Steer Clear of Regional Afghan Response.)

In late May, Washington indicated that although combat operations would end in December 2014, some 10,000 US soldiers would remain in Afghanistan.

“Judging by the latest statements by US president Barak Obama, they are not going to withdraw this year. As long as this force is there, it will serve as a counterbalance to the Taleban,” he said. “But after the withdrawal of coalition forces from Afghanistan, those terrorist groups that are based in northern Pakistan – the Taleban, the Islamic Movement of Uzbekistan and others that are very aggressive and aim to create an Islamic state in Central Asia – will of course present a danger to all the Central Asian countries.

“Therefore, when [NATO-led] forces withdraw, and if the peacebuilding process in Afghanistan falters, these grand plans to establish a caliphate could become a threat,” he continued. “We know that all these terrorist organisations are parts of the same chain and are well funded.”

However, some residents of border areas insist they are untroubled by the prospect of NATO-led troops withdrawing from Afghanistan.

“As someone who lives in the border area of Tajikistan, I feel no threat or danger. We used to live at peace with them [Afghans] even before the Americans arrived in Afghanistan,” said Khudonazar Navjuvonov, who lives in the Roshan district of Tajikistan’s eastern Badakhshan region. “I am sure that even when they depart, nothing will happen. I was witness to when they [Afghans] were under Taleban rule for several years. We saw no threats from them. On the contrary, the situation was calm – the flow of drug trafficking diminished. But with the arrival of the Americans, drug trafficking has increased.”

Azim Dilbarov, who lives in the Darvoz region of Badakhshan, was similarly unconcerned.

“No, I have no fears – for several reasons. First, because there’s never been an attack on Tajik territory from the south. If anything, the other side provided a refuge for Tajiks, particularly over the last century,” he said, in a reference to refugees who fled to Afghanistan during 1992-1997 civil war.

“Second, today Afghanistan… is powerful enough to protect its own borders from extremist groups.”

The security risks that could follow withdrawal have been raised at length by the Russian media, which have stressed the vulnerability of Central Asian countries bordering Afghanistan.

Moscow is not keen for the US to head international anti-narcotic efforts, feeling that its close links with the Central Asia countries means it faces a greater threat from trafficking and so should lead in the war on drugs.

However, Dilbarov said that media speculation about the dangers of the NATO troop exit was misguided.

“As for media predictions about the consequences of the withdrawal of NATO forces and the supposed threat to Tajikistan that will result from it, these come from those who have their own interests in Tajikistan and are against the sovereignty of our country,” he said.

In a reference to the strained relationship with neighbouring Uzbekistan, he added, “What we need to be afraid of is not attacks from the south but on our western frontiers.”

Some observers claim that Tajik officials have in the past exaggerated the potential threats in the hope of boosting security assistance from Russia, the US, and international organisations.

“Frankly speaking, I don’t believe this propaganda from certain media and by some in the defence and security forces that following the departure of NATO forces from Afghanistan, the situation in Tajikistan will worsen,” said Abdunaim Solehov, a resident of Panj, a border district. “I think it’s speculation by certain forces that want to scare the world, and in particularly Western donor organisations that fund efforts counter-terrorism and counter-extremism and provide a lot of money for this,” he said. “Maybe they are doing this to get more funding. Look – when the Taleban were in power, they never mounted any offensive against us Tajiks. There wasn’t even one attack on our borders.”

On a practical level, Sadi Kadamov, from the Kumsangir district, argued that domestic concerns in Afghanistan would keep any problems contained.

“I don’t envisage any threat after the withdrawal of NATO forces because they [the warring factions in Afghanistan] will be sorting out things among themselves. Various ethnic groups will be in conflict with each other and they won’t have time to think of attacking foreign territories. There is a partial threat from extremist groups such as IMU, but overall I’m not worried.”

For their part, Afghan officials said they were perfectly capable of securing their side of the border.

Mohammad Zaman Mamazai, commander of the Afghan border police’s northern zone, who took part in the Dushanbe conference, told IWPR that the situation in areas immediately to the south of the Tajik border was consistently calm.

“There were never any serious armed confrontations here,” he said. “Even if there were any danger, I assure our Tajik brothers that we have the forces to prevent any illegal border crossings.”

“The frontier forces are well-resourced and our forces have been well equipped and trained in the past ten years, so that we’re able to handle security on all our country’s borders. Tajikistan’s concerns are not appropriate,” he said.

Sapai said that problems did occasionally arise, but they emanated from the Tajik side of the border, Afghan forces had a good record on responding to such incidents.

“We have arrested terrorists holding Tajik, Uzbek and Chechen [ie Russian] citizenship who were crossing the Tajik border into Afghanistan,” he said.

Sayed Sarwar Hussaini, spokesman for the governor of Kunduz province, agreed that Tajikistan’s concerns were unfounded.

“The departure of foreign forces isn’t going to affect us,” he told IWPR. “It’s been a year since Afghan forces took over security responsibilities on the border. Since the handover, security has been getting better in this province. Even when there were foreign forces in the province, Afghans were responsible for securing the border, as the foreigners did not intervene in that area.”

“We would like reassure neighbouring countries that they will face no problems from the Afghan side,” he added. “We’d like to receive reciprocal assurances from them.”