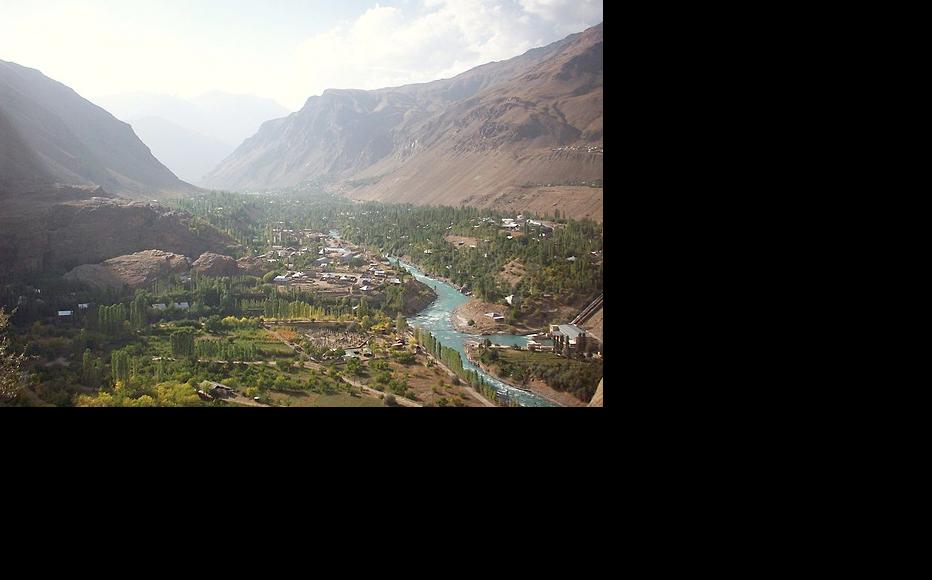 Khorog is the administrative centre of Badakhshan, a high-altitude region in southeast Tajikistan. (Photo: Zack Knowles/Wikimedia Commons)
The link has been copied

A week after three people died in clashes in Khorog, a provincial centre in southeast Tajikistan, an uneasy calm has returned as protesters disperse.

The violence was sparked by local resentment at a policing operation perceived as heavy-handed, and analysts are asking why so few lessons seem to have been learned since a similar confrontation nearly two years ago left about 50 people dead.

Khorog is the main town in Badakhshan, a remote and often inaccessible province that is sparsely populated by the Pamiri people, who are culturally distinct from the rest of Tajikistan’s population.

Trouble broke out on May 21 with a police attempt to arrest Munavvar Shanbiev, a well-known local figure whom they suspected of trafficking narcotics. Badakhshan’s proximity to northeast Afghanistan makes it one of the routes used by smugglers bringing Afghan heroin north through Central Asia.

Police say Shanbiev’s vehicle failed to stop when they confronted it in central Khorog, so they opened fire. In the ensuing firefight, they say, two suspects were killed, as was one police officer. Shanbiev was  injured and captured.

The incident sparked disturbances, as angry supporters of Shanbiev and his associates surged towards the provincial interior ministry department and set it on fire, along with nearby court and prosecution service buildings.

A fourth death occurred on May 23-24 when a man was shot dead after he threw a bomb at the local headquarters of Tajikistan’s National Security Committee.

Several arrests were made before an agreement was reached on May 25 to set up an investigating commission involving protest leaders and government officials including presidential aide Sherali Khairulloev. The commission started work the following day, and the crowds dispersed. Tajikistan’s chief prosecutor, Sherkhon Salimzoda, met civil society activists on May 28 to assure them the investigation would get to the bottom of things.

The unrest highlights enduring mistrust of central government and its representatives in Badakhshan, first and foremost the police.

The latest trouble has many parallels with the way another police operation escalated into running battles in Khorog in July 2012.

In that case, police were trying to corner Talib Ayombekov, a border guards commander whom they suspected of involvement in the murder of a top regional security official as well as of trafficking. Before a ceasefire was called several days later, the death toll reached 48. (See Tajik Rebels Lay Down Arms in Badakhshan.)

No one disputes that drug trafficking is an issue in the region. The problem, experts, say, is the perception that police moved in to capture Shanbiev with little regard for local sensitivities or the risks to civilians in the area.

Aliakbar Abdulloev, a former police officer, told IWPR that the operation to arrest the suspect was conducted “unprofessionally”.

“He could have been placed under surveillance and detained in a different manner,” Abdulloev said.

A former staff member of Tajikistan’s Drug Control Agency, who spoke to IWPR on condition of anonymity, disagreed with this view, arguing that the strength of local traffickers forced police to move against their suspects when the opportunity presented itself.

“They knew that if they didn’t detain him while he was within the town perimeter, they would have no chance of catching him after had left it,” she said.

She added that while these deaths were regrettable, one should not forget that people in Badakhshan also died from illegal drug use, a direct consequence of trafficking.

“Narcotics use is so widespread that good, bright young people are dying,” she said.

The uniformed police, centrally controlled from the Tajik capital Dushanbe, are the focus of wider resentment about the way Badakhshan is governed. The force is seen is corrupt, heavy-handed, and unrepresentative of the community it is meant to serve.

During the negotiations on setting up a commission to investigate the trouble, local community leader Koshif Shonasimov complained that recruitment to the police was low in Badakhshan. “In some of the security services, few young local people are being recruited even into the rank-and-file,” he said.

The Tajik authorities have recognised this as a problem, and responded with a policy of replacing outsiders with local men in the OMON, the riot police unit that has been stationed in Khorog since the 2012 unrest. As IWPR reported in February, the plan is to raise the local quota to 70 per cent. IWPR understands that recruitment has proceeded since then, so that 60 per cent of the OMON force are now Badakhshan men.

Other commentators say things are more complex than a simple confrontation between law-enforcement and drug traffickers, arguing that the two are often intertwined, since powerful criminals are able to pay off the police.

In Khorog, many residents just want tensions to subside so that they can get on with their lives.

“We don’t need a war,” said Davlatbegim, 53. “We want nothing to do with how they [the authorities] deal with members of the criminal world.”

[Correction:  police say one officer and two suspects were killed in a firefight, not two officers and one suspect as we reported. Apologies for this inaccuracy.]

Tabshohi Qonun is a pseudonym for a journalist in Tajikistan. Lola Olimova is IWPR Tajikistan editor.

This article was produced under two IWPR projects: Empowering Media and Civil Society Activists to Support Democratic Reforms in Tajikistan, funded by the European Union; and the Human Rights Reporting, Confidence Building and Conflict Information Programme, funded by the Foreign Ministry of Norway. The contents of this article are the sole responsibility of IWPR and can in no way be taken to reflect the views of either the European Union or the Norwegian foreign ministry.

Tajikistan
Women's rights
Connect with us