A female activist has no regrets about helping government soldiers defect.

A female activist has no regrets about helping government soldiers defect. 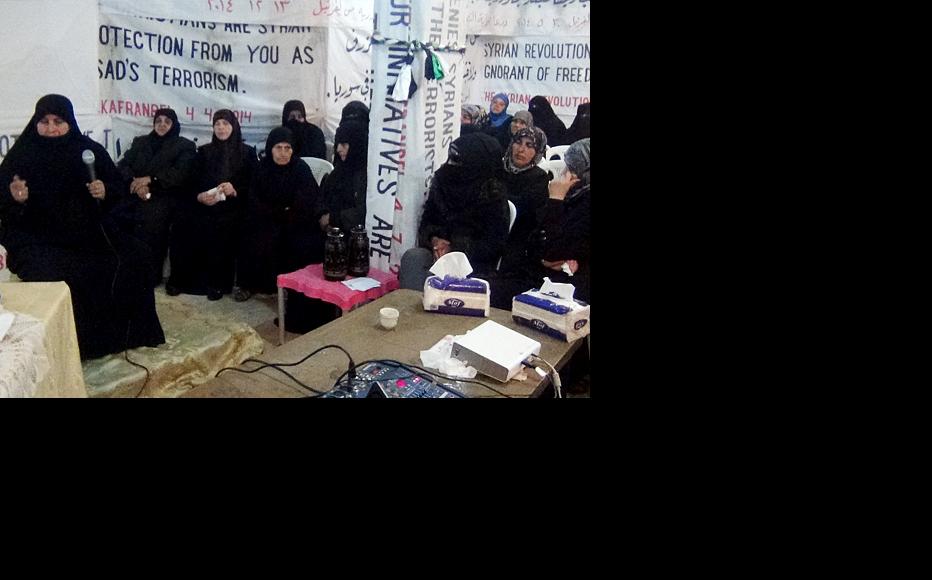 Umm Mohammad is honoured at the Mazaya centre during International Women’s Day. (Photo: Ghalia al-Rahhal)
The link has been copied

Umm Mohammad is a 55 year-old mother of five sons, and is a sociable woman of strong character. Her support for the uprising led to her spending three months in a men’s prison, but she has no regrets.

“I stood with the revolution from the beginning because I believed it was an uprising against injustice, oppression, poverty and torment,” she said. “The people revolted against an oppressive leader who had insulted and ignored them.”

Umm Mohammad listed the grudges she held against the government. Her son Raed had been forbidden to pray during his mandatory army service. “It’s as if prayer is a sin to them,” she said. And although her eldest son Mohammad was poor, the authorities refused to let him build a room on the roof of her house so that he could get married and have somewhere to live.

Then there was the predicament of her neighbour Abu Muthhir, denied the expensive permit that would have allowed him to set up a market stall and support his family.

Umm Mohammad fell silent, then continued, “More than that, my 22 year-old son Ahmad was arrested because he tried to defect in Qatifa in Damascus on June 12, 2012.”

“The revolution should have started a long time ago,” she continued. “It’s true that it came late, but what is important is that it finally happened. I did not stand idle. I began helping the revolutionaries, particularly the soldiers who wanted to defect since my house was close to the Hamidiya checkpoint in Maarat al-Numan. I worked in coordination with them.

“Soldiers who defected would hide in my house for a while, and then I would smuggle them and other revolutionaries back to their home towns. Some were part of the Free Syrian Army and others just returned to their families.”

Umm Mohammad was happy to help these young soldiers escape their oppressors. One day, she heard a knock on her door. A government army patrol ordered her to come with them.

“We won’t keep you long, it’s just a formality and then we will bring you back home,” an officer replied.

“By the honour of your moustache, will you bring me back?” she asked the patrol leader, half-jokingly.

He laughed and touched his moustache in a sign of assent, and she went off with them to the Hamidiya checkpoint.

There, the patrol leader interrogated her about helping soldiers to escape. When she denied it, he ordered her to sent to prison.

“You promised me by your moustache that you would bring me back home,” Umm Mohammad protested.

Umm Mohammad described what happened next, “I went to prison and found many young men there were in a bad way. They were wounded, hungry, sick and desperate. I was the only woman among them, but they welcomed me and said, ‘Don’t worry, auntie, they will release you soon.’ I reassured them that I was not afraid, and said, ‘I am among my sons and brothers. These fools have no conscience.’

“My journey with these prisoners in the Cultural Centre Prison in Maarat al-Numan lasted three months. I slept on the floor without a mattress,” she said. “I would often offer my blankets to new prisoners who had been tortured. I felt that they were truly my sons.”

According to Ahmad al-Tanari, 35, a former inmate in the Maarat al-Numan jail, “She was a mother to all the prisoners, tending to the wounded, helping the sick, feeding the hungry, consoling the bereft and giving hope to the desperate.”

“I could not offer them financial help,” Umm Mohammad continued, “but I did give them emotional and moral support. I raised their spirits, helped them forget their pain, and reassured them that they would soon be free.

“True enough, the revolutionaries began attacking army prisons in Maarat al-Numan, and took control of checkpoint after checkpoint. When the [prison guards] felt they were nearing the end, they opened fire randomly at the prisoners before running away. Some [prisoners] died, some were wounded and some survived. By the grace of God, I was one of the survivors. Those heroes surrounded me as if my life was as precious to them as their own. Many of them were martyred.”

Umm Mohammad began sobbing. “Yes. I knew they would die with dignity. There is nothing more dear to God than a martyr. This was on August 25, 2013.”

“I have always been proud of my mother,” said her eldest son Mohammad, 38. “She is a strong woman who knows what justice is and stands by her beliefs.”

“God bless her, she is the best of neighbours, sisters, and friends,” said Umm Ammar, 57, who lives nearby.

Ghalia al-Rahhal, the director of the Mazaya Centre, which supports women in Idlib province, said, “We heard about Umm Mohammad and what she had done. We decided to honour her at along with other female activists at our centre on International Women’s Day, on March 8, 2015. She truly deserves this praise.”

“I have not and will never think of giving up,” Umm Mohammad concluded. “I will remain loyal to the revolutionaries and the revolution until victory or death.”

Speaking Out: Women's Voices from Syria
Syria
Detentions, Conflict
Connect with us