Genocide convictions among those confirmed at appeals hearing. 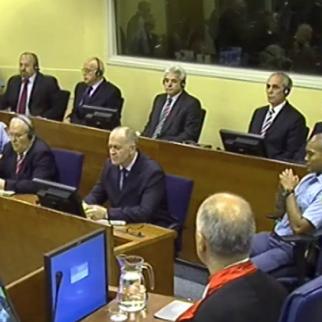 Genocide convictions among those confirmed at appeals hearing.

Judges at the Hague tribunal have upheld the sentences of five high-ranking Bosnian Serb army officers convicted for their involvement in the 1995 Srebrenica massacre.

Srebrenica, a town in eastern Bosnia, was declared a United Nations safe area in 1993 but fell to Bosnian Serb forces on July 11, 1995. In the days that followed, more than 7,000 Bosnian Muslim men and boys were murdered at execution sites in the surrounding area in the worst mass killings in Europe since the Second World War.

Vujadin Popovic, Ljubisa Beara, Drago Nikolic, Vinko Pandurevic, and Radivoje Miletic went on trial in August 2006 and were convicted in June 2010 for a range of crimes including genocide. It was the largest case the tribunal has completed to date.

Popovic and Beara were sentenced to life in prison for genocide, conspiracy to commit genocide, violations of the laws or customs of war, and crimes against humanity, through participation in a “joint criminal enterprise” or JCE.

Nikolic was found guilty of aiding and abetting genocide, crimes against humanity and violations of the laws or customs of war through his participation in the JCE. He received 35 years.

Pandurevic was found guilty of aiding and abetting violations of the laws or customs of war and crimes against humanity, as well as failing to prevent and punish the crimes of his subordinates. He received a jail term of 13 years.

These sentences were confirmed by the Appeals Chamber on January 30.

Miletic – who was found guilty of crimes against humanity and violations of the laws or customs of war through participation in a JCE – had his 19-year sentence reduced to 18. The Appeals Chamber reversed his convictions for persecution and inhumane acts in relation to forcible transfers of Bosnian Muslims fleeing the town of Zepa, but added a conviction for murder for killings that took place at Potocari, near Srebrenica.

A sixth defendant, Ljubomir Borovcanin, did not appeal against his 17-year prison sentence, while the seventh man convicted in the trial, Milan Gvero, died in February 2013.

Although the sentences against four of the five appellants were unchanged, the Appeals Chamber made some changes. It reversed the convictions of Popovic Beara, and Nikolic for the killing of six Bosnian Muslim men near Trnovo, carried out by the paramilitary unit known as the Scorpions, whose own video of the murders provided conclusive evidence.

At the same time, it added convictions for Popovic and Beara for conspiracy to commit genocide. It also added new convictions for Pandurevic for aiding and abetting murder, extermination and persecution, while setting aside some of the convictions made against him at trial.

Some of the accused reported directly to former Bosnian Serb army chief Ratko Mladic, who is currently on trial at the Hague tribunal for crimes including genocide.

Daniella Peled is an IWPR editor in London

ICTY - International Criminal Tribunal for the former Yugoslavia
Bosnia and Herzegovina
Crimes Against Humanity, War crimes
Connect with us