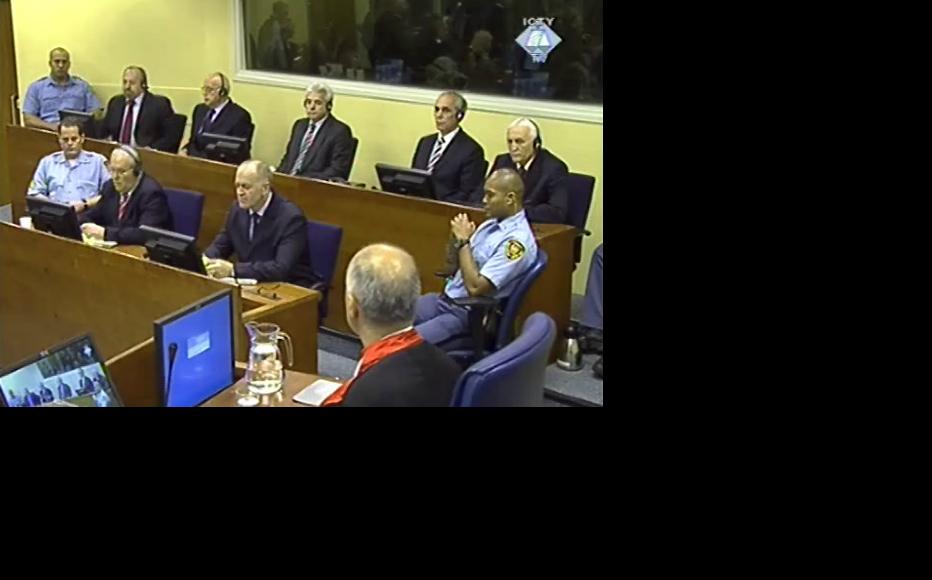 Srebrenica Seven trial draws to an end (Photo: ICTY)
The link has been copied

The largest trial ever conducted at The Hague tribunal culminated this week with convictions for all seven Bosnian Serb defendants, who were found to have played various roles in the 1995 Srebrenica massacre that left some 8,000 Bosniak men and boys dead.

Two of the accused – high-ranking Bosnian Serb army officers Vujadin Popovic and Ljubisa Beara – were found guilty of committing genocide and sentenced to life in prison.

Delivering the verdict to a packed courtroom and public gallery on June 10, Presiding Judge Carmel Agius stated that “in the context of war in the former Yugoslavia, and in the context of human history, these events are arrestive in their scale and brutality”.

Srebrenica, a town in eastern Bosnia, was declared a United Nations safe area in 1993 but fell to Bosnian Serb forces on July 11, 1995. Judge Agius described the way Bosniak (Bosnian Muslim) men and boys were captured and detained in various detention centres in the days that followed the capture of the enclave.

“An atmosphere of terror was maintained through beatings and sporadic executions,” he said. “Their spirits broken, the Bosnian Muslim men were taken for execution. Some were blindfolded and their hands tied, and at one detention site they were given a final cup of water. Then they were transported to nearby locations, and shot.”

Popovic, who was chief of security for the Drina corps of the Bosnian Serb army, “was entrenched in several aspects of the operation, and he participated with resolve”, Judge Agius said.

“Popovic knew the intent was not just to kill those who had fallen into the hands of the Bosnian Serb forces, but to kill as many as possible with the aim of destroying the group,” he continued. “Popovic’s ensuing robust participation in all aspects of the plan demonstrates that he not only knew of this intent to destroy, he also shared it.”

In addition, the judges concluded that Popovic was present at several killing sites, including “at the field in Orahovac as the executions took place”.

As Judge Agius read out the details of the massacre and Popovic’s participation in it, the accused repeatedly shook his head but displayed no other emotion.

Beara, also convicted of genocide, was chief of security for the main staff of the Bosnian Serb army. As the most senior officer of the security branch, Beara had “the clearest overall picture of the massive scale and scope of the killing operation”, Judge Agius stated.

“Beara’s vigorous efforts to organise locations and sites, recruit personnel, secure equipment and oversee executions all evidence his grim determination to kill as many as possible as quickly as possible,” the judge said.

“Beara was a man intent on destroying a group by killing all the members of it within his reach. Beyond all reasonable doubt, he harboured genocidal intent.”

In addition to the genocide conviction, both Popovic and Beara were found guilty of extermination and persecution as crimes against humanity and murder as a war crime. They were both found to have participated in a joint criminal enterprise to murder the “Bosnian Muslim males of Srebrenica” with “persecutory intent”.

Both men were acquitted of forcible transfer and deportation charges, the reasons for which are set out in the full written judgement, not yet publicly available.

The only other person to be convicted of genocide at the tribunal was high-ranking Bosnian Serb army officer Radislav Krstic, who stood trial in 2000 for his participation in the Srebrenica massacre.

However, Krstic appealed against that conviction and appeals judges found that he was not a “principal perpetrator” of genocide, but rather that he aided and abetted it. His prison sentence was thus reduced from 46 years to 35 years.

In 2005, Bosnian Serb army officer Vidoje Blagojevic was found guilty of aiding and abetting genocide during the Srebrenica massacre, but that conviction was overturned on appeal. Blagojevic was sentenced to 15 years in prison but was granted early release in January of this year.

This week, one of the other defendants in the Popovic case, Drago Nikolic, was found guilty of aiding and abetting genocide, but judges did not find that he was a direct perpetrator of it.

Nikolic was chief of security for the Zvornik brigade of the Bosnian Serb army, and he was “aware of the plan to murder on a large scale, but not of some of key features which would evidence genocidal intent,” Judge Agius said.

Nikolic gave directions at the Orahovac execution site on July 14, Judge Agius said, and he also ordered a battalion in the Zvornik brigade “to secure the prisoners at the Kula School in the awareness that they would be executed”.

The following day, on July 15, Nikolic worked with Beara and Popovic to organise the detention and execution of prisoners at Rocevic School, Judge Agius continued.

Nikolic was thus found to have participated in the joint criminal enterprise to murder the Bosniak males of Srebrenica, and “he had knowledge of the genocidal intent of others and that he made a substantial contribution to genocide”.

He was found guilty of aiding and abetting genocide, as well as extermination, murder and persecution. He was found not guilty of conspiracy to commit genocide, forcible transfer and deportation.

Nikolic was sentenced to 35 years in prison.

The next accused, Ljubomir Borovcanin, was deputy commander of the special police brigade of the Bosnian Serb ministry of interior.

Judges found him guilty of aiding and abetting extermination, murder, persecution, and forcible transfer. They also found him guilty, as a superior, for murder as a war crime and crime against humanity.

Borovcanin was acquitted of genocide, conspiracy to commit genocide and deportation and sentenced to 17 years in prison.

Judges found that Borovcanin arrived at Kravica warehouse on July 13 “where over 1,000 Bosnian Muslim men were detained”. He saw a number of dead bodies, Judge Agius said, and Borovcanin knew that his units had “custody and/or control of the Bosnian Muslim prisoners that day and therefore had a duty to protect the remaining prisoners in the warehouse”.

Judge Agius said Borovcanin and his men then left the warehouse.

In addition, judges found that Borovcanin failed to punish his subordinates for the murder of the prisoners he had encountered upon first arriving at the warehouse.

Judge Agius then turned to Radivoje Miletic, the former chief of administrations for operations and training at the Bosnian Serb army main staff.

Miletic was sentenced to 19 years in prison.

Judges found that Miletic drafted “Directive 7”, which is said to have been issued in March 1995 by former Bosnian Serb president Radovan Karadzic, who is currently standing trial at the tribunal.

The directive stated that the Drina corps of the Bosnian Serb army was to create “an unbearable situation of total insecurity with no hope of further survival or life for the inhabitants of Srebrenica and Zepa”, Judge Agius said.

Judges found “whatever [Miletic’s] level of input in terms of content or wording [of the directive], he was intimately acquainted with its final text” and “had full knowledge of the common criminal plan to force the Bosnian Muslim populations from Srebrenica and Zepa enclaves”.

Through this, and his role in “depriving the enclaves of humanitarian aid and [the UN Protection Force] of supplies”, judges found that Miletic contributed to the joint criminal enterprise to forcibly remove the Bosniak population from Srebrenica and Zepa.

Judges also found that it was “foreseeable” to Miletic that murder would be committed in nearby Potocari after thousands of Bosniaks fled there following the fall of Srebrenica.

Judge Agius then moved on to Milan Gvero, the assistant commander for moral, legal and religious affairs of the Bosnian Serb army main staff.

Gvero was found to have contributed to the joint criminal enterprise to forcibly remove the population from Srebrenica. He was found guilty of persecution and forcible transfer and acquitted of murder and deportation. He was sentenced to five years in prison.

Gvero “carried out key functions relating to external propaganda and interaction with international organisations, with the aim to support the plan to forcibly transfer the populations from the enclaves”, Judge Agius said.

Gvero issued a statement to the media after the Bosnian Serb army had launched an attack on Srebrenica, in which he stated that the army’s activities were intended to “neutralise Muslim terrorists and not against any civilians or [the UN force]”.

Judge Agius said this “blatantly false statement” was intended to “mislead the international authorities concerned with protecting the enclave, with a view to delaying any action that could frustrate [the Bosnian Serb army’s] plans”.

The last accused to be dealt with during the hearing was Vinko Pandurevic, commander of the Zvornik brigade of the Bosnian Serb army.

Pandurevic was found guilty of aiding and abetting murder, persecution and forcible transfer. He was also found guilty, as a superior, of murder.

He was acquitted of genocide, conspiracy to commit genocide, extermination and deportation. Judges sentenced Pandurevic to 13 years in prison.

Pandurevic was aware of the plan set out in Directive 7 and his participation in the “military attack and take-over of the Srebrenica enclave substantially contributed to the forcible transfer of the civilian population from Srebrenica”, Judge Agius said.

He also had reason to know that his subordinates “had committed, were committing, or were about to commit crimes in relation to the detention, execution, and burial of the Bosnian Muslim prisoners in the area of Zvornik”.

However, Judge Agius noted that Pandurevic “opened a corridor” that allowed a column of Bosniaks to pass through to Bosnian government held territory, contrary to orders from his superiors. “Thousands of men” were able pass through this corridor, the judge said.

After informing Pandurevic of his sentence, Judge Agius adjourned the hearing.

It is unclear at this stage if the prosecution or the various defence teams will appeal aspects of this week’s judgement.

The Srebrenica Seven trial – as it has become known – began on August 21, 2006 and concluded on September 15, 2009. During that time, judges admitted evidence from 315 witnesses and reviewed over 5,000 exhibits.