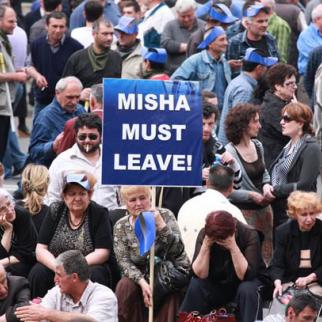 Merabishvili was one of the most influential figures in the last government, which lost power in elections in October. He remains general secretary of President Mikheil Saakashvili’s United National Movement, UNM, now in opposition.

He was arrested on May 21 on corruption charges, to which prosecutors have since added accusations of abuse of power. The latter relate to police action during a demonstration on May 26, 2011, in the course of which four people died.

As interior minister at the time, Merabishvili was in charge of the police. The new charges allege that he ordered the force to assault opposition protesters. Human rights activists have long demanded an investigation of what they say was a disproportionate police response.

The corruption charges include allegations that Merabishvili seized a house on the Black Sea from its rightful owner and lived in it after getting the interior ministry to pay for refurbishment.

Merabishvili and Zurab Chiaberashvili, a former health minister and mayor of Tbilisi, are both accused of running a scheme under which 22,000 people were paid to carry out surveys on the unemployed, when prosecutors say they were actually working for the UNM.

Chiaberashvili has been released on bail.

Merabishvili’s colleagues in the UNM say the charges are politically motivated and the work of a government intent on revenge on allies of Saakashvili.

“This is a political decision and [Prime Minister] Bidzina Ivanishvili is behind it,” Giorgi Gabashvili, a UNM member of parliament, said. “Ivanishvili personally issued the order for Merabishvili’s arrest, but he should be aware that he won’t destroy the National Movement like this.”

Ivanishvili denied there was any political subtext to the criminal charges.

“Don’t jump to conclusions. Let’s await the court decision,” he said. “I think the argument that this is political persecution is so thin that they can’t use it any more.”

The European Union’s high commissioner for external affairs, , Catherine Ashton, called for a fair, transparent and independent trial and urged the Georgian authorities to pursue justice “impartially and free from political motivation”.

Merabishvili evokes strong opinions in Georgia, where some see him, with Saakashvili, as a hero in the war against crime and corruption, and particularly in ending massive bribe-taking by police. His critics, however, accuse him of giving the police too much power and using the state’s resources against political opponents.

Saakashvili remains head of state, his effective powers much reduced by the new government. He will step down when a presidential election takes place in October, and is not eligible to run again.

If the UNM is planning to field a candidate, it must do so before the end of June. Until his arrest, Merabishvili had been seen as an obvious choice.

Giorgi Baramidze, a Saakashvili-era minister who now sits in parliament, suggested that this might still happen.

“Plans have changed. A very important person for our party has been detained,” he said. “We can’t rule out holding a primary and naming Merabishvili as our candidate for the presidency.”

Sofo Bukia is an IWPR-trained journalist working for the broadcaster Rustavi-2 in Georgia.

Georgia
Rule of Law
Connect with us