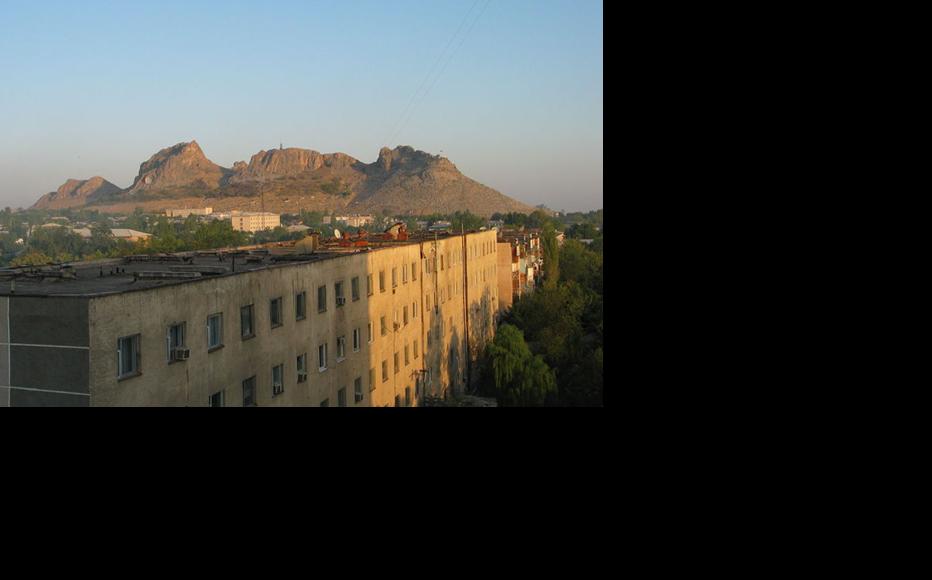 Osh, scene of worst bloodshed in Kyrgyzstan for 20 years. (Photo by Christian Gawron http://go.iwpr.info/osh)
The link has been copied

Running battles between Kyrgyz and members of the large ethnic Uzbek minority in Osh on June 10 and 11 left 41 people dead.

Commentators say it is the worst bloodshed seen in the Central Asian state since the Uzbek-Kyrgyz clashes of 1990, a year before the Soviet Union broke up.

Announcing the news, Kyrgyzstan’s health ministry told the 24.kg news agency that 600 people were injured, with around 400 needing hospital treatment.

Confusion surrounds the immediate cause of the clashes, but they appeared to escalate out of a fight between two groups involving a small number of people overnight on June 10-11.

News that violence had broken out in the city spread quickly, and many neighbourhoods spent the night in fear of coming under attack.

The following day, armed gangs fought it out in central Osh, vandalising shops and burning cars as they went.

“Shots can be heard everywhere,” a local journalist told IWPR. “They are torching shopping centres and restaurants.”

Military units from the army and interior ministry were sent in to restore order.

Foreign minister Ruslan Kazakbaev, attending a regional meeting in Uzbekistan’s capital Tashkent, said his government had done everything necessary to restore stability and could guarantee security for the local population.

Speaking in Osh on June 11, Azimbek Beknazarov, deputy prime minister in Kyrgyzstan’s interim government and special envoy for the southern part of the country, said the imposition of a curfew and the troop deployment had helped calm things down.

Although he was confident that the authorities would now maintain control in the city, he noted that there were still some localised outbreaks of trouble.

Local journalist Isomidin Ahmedjanov confirmed that after the troops were sent in overnight, the situation in the city centre calmed down. By about midday on June 11, the military were patrolling the centre and not allowing anyone in, he said.

Nevertheless, he said, two hours later shots could still be heard from various parts of Osh. “It isn’t clear what’s going on the city outskirts, who is attacking whom. There have been injuries. I’ve heard from three separate sources that in residential districts, the crowds are on their own; there are no police or army,” said Ahmedjanov.

Towards six in the evening, a fresh upsurge in fighting took place in the centre, in the Cheremushki and Amir Temur districts, and in the nearby village of Furkat.

Local communities armed themselves to protect their neighbourhoods in case the clashes spread to them.

“All my neighbours are out in the street with axes and sticks defending the mahalla [neighbourhood],” said Nazarbegim, a woman whose home is in the centre of Osh, close to where the main clashes had happened.

The fighting was strongly reminiscent – though more bloody – than the Kyrgyz-Uzbek skirmishes which took place last month in another southern town, Jalalabad. In that case, the Kyrgyz authorities accused allies of former president Kurmanbek Bakiev, ousted during mass protests last month, of masterminding those disturbances.

This time, Beknazarov did not accuse any particular group, although made it clear he did not believe it had happened spontaneously.

“The riots are clearly inter-ethnic in nature, and they’ve been carefully orchestrated,” he said.

Political analyst Elmira Nogoybaeva agreed with this view, saying, “It would be naïve to suppose that instability in the south on such a scale is merely the result of a minor clash between groups of young people. It’s much more likely to be a carefully-planned act of subversion.”

In Osh, rumours circulated about the cause of the violence – and about who was to blame.

Some local residents, Kyrgyz and Uzbek, accused the other community of starting the fighting.

“Our people got killed today and we’re very much alarmed, ” said a retired police officer of Uzbek ethnicity.

By contrast, a female pensioner living near the centre of the fighting alleged that “the Uzbeks were well prepared and had weapons. They attacked the Kyrgyz, and we are very much afraid for our people.”

Jalalitdin Salahitdinov, head of the Uzbek National Centre in Osh, said, “It was the police who fired first. This is clearly an ethnic conflict, a conflict between Uzbeks and Kyrgyz which has been a long time coming.”

Many of the people interviewed by IWPR stressed that they felt no animosity towards their own Uzbek or Kyrgyz neighbours.

“The conflict is being orchestrated,” said a Kyrgyz woman who lives in central Osh, near the scene of the fighting. “Our [apartment] block is multi-ethnic, and I’ve already been to see my Uzbek neighbours to tell them they should move into my flat if there’s any danger. We’ll hide them if necessary.”

An Osh resident said he had heard two explanations for the unrest. One, he said, was that “it’s Bakiev’s people inciting it, they are trying to destabilise things so that blood flows and conflict takes off. The other version is that it’s been provoked by external actors.”

Political scientist Mars Sariev, too, believes there could be more than one factor at work. On the one hand, it is clearly to the advantage of Bakiev loyalists if the interim government faces yet more unrest and loses credibility in the process.

But there are also powerful local forces involved in organised crime, so while the clashes have been portrayed as ethnic, they may actually been sparked by a power-struggle over illicit business including the drug-trafficking. Osh is an important transit point for Afghan heroin smuggled northwards to Russia and the rest of Europe.

Kyrgyzstan’s interim leader, Roza Otunbaeva, noted that the violence came two weeks ahead of the June 27 in which voters will be asked to approve a new constitution offering a major overhaul of the political system.

Pavel Dyatlenko of the Polis Asia think-tank agreed that the timing was significant, noting that the province of which Osh is administrative centre accounts for a fifth of Kyrgyzstan’s population, and having a curfew would make it impossible to conduct a referendum there.

Beksultan Sadyrkulov is the pseudonym of a reporter in Bishkek; Asyl Osmonalieva and Isomidin Ahmedjanov are IWPR-trained journalists in Bishkek and Osh, respectively; Inga Sikorskaya is an IWPR editor based in Bishkek but currently in Osh; Dina Tokbaeva is IWPR’s Kyrgyzstan editor.